WWE spoilers: WWE bringing back the Nation of Domination? 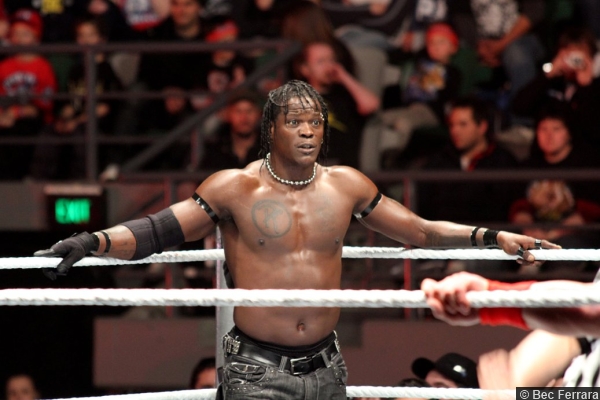 F4WOnline.com is reporting that there is talk within WWE of bringing back the concept behind the popular Attitude Era stable, The Nation of Domination. The report states that the debut of Rusev and his subsequent victories over R-Truth, Xavier Woods, & Kofi Kingston, as well as his budding feud with Big E, is no random billing as those four Superstars may be forming a group similar to the Nation of Domination. Throughout the late 90’s, Faarooq (Ron Simmons) led a group of future stars in a dominant faction that ran roughshod over WWE for several years and engaged in a memorable feud with D-Generation X. The group debuted in 1996 with just Faarooq and manager Clarence Mason, who were flanked by an entourage of non-wrestlers. The Nation of Domination was loosely based on The Nation of Islam and The Black Panther Party. Over the next few months of its existence, The Nation of Domination grew to include Crush, Savio Vega, rappers/wrestlers PG-13 (J.C. Ice & Wolfie D), and an unknown competitor that would later become known as D’Lo Brown.

The Nation’s first major feud was with Ahmed Johnson, a feud which lasted well into 1997 and, in June of 1997, Faarooq declared that he was going to improve upon his stable, which led to Kama Mustafa (formerly Papa Shango and the wrestler who would become known as The Godfather) and former rival Ahmed Johnson joining the group. Ahmed’s time in The Nation of Domination was short-lived, however, as an injury led to Faarooq kicking Johnson out of the group. In Ahmed’s place, Faarooq brought in the young upstart Rocky Maivia, while Crush left the group to become part of the Disciples of Apocalypse (D.O.A.) and Savio Vega went on to form Los Boricuas. This led to the “Gang Wars” rivalry between the three factions. Rocky Maivia’s time in The Nation of Domination would pave the way for a spectacular career as, after changing his ring name to The Rock, the third-generation star became the unofficial leader of The Nation of Domination. The Nation of Domination would also recruit Mark Henry during this time and, in March of 1998, The Rock officially took control of The Nation and gave a “cooler” look to the faction that was representative of The Rock’s gimmick change.

The Rock would later recruit Owen Hart into the group and The Nation would feud with D-Generation X throughout 1998 before Owen Hart would be re-worked into the Blue Blazer character and The Godfather would venture out into a singles career. The death nail of The Nation came as a result of The Rock’s soaring popularity and an assault from fellow Nation members D’Lo Brown & Mark Henry would bring an end to the group in October 1998. D’Lo Brown & Mark Henry would briefly use The Nation name and entrance theme before dropping all affiliation with the group by the end of the year.

With Big E still garnering a pretty positive reaction from crowds and with the lack of direction in the careers of R-Truth, Xavier Woods, & Kofi Kingston, getting put into a Nation-like stable could be just what these Superstars need to make a name for themselves in WWE and, with original Nation member Ron Simmons under contract with WWE, this rumored stable makes all the more sense.

Would you want to see a group like this reformed in the WWE? Post your comments in the box below.