So we finally have Daniel Bryan as the champion in WWE after months of struggle, but it feels like the chase was better than the outcome… 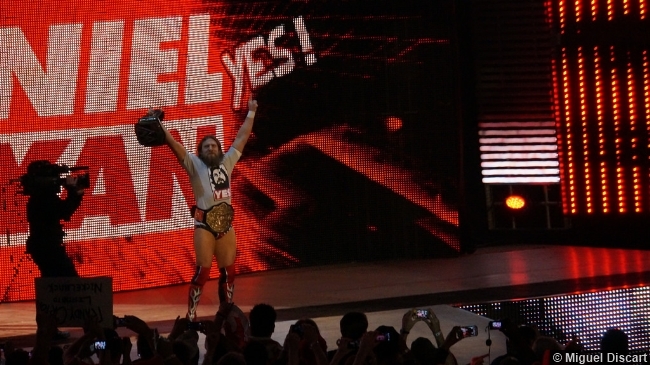 Just before WrestleMania there was a kind of realisation that there were few top heels for Bryan to face in his first feud if and when he became champ, just where would the booking team go with him?

Brock Lesnar would be the obvious choice, but having beaten the Undertaker and conquered the streak, he needs to beat everyone in front of him and almost take the streak on for himself.  This would mean beating Bryan for the title, which can’t happen so soon after his long road to win it.

He can’t go against face John Cena, and his other obvious opponents are tied up in Evolution with their feud against The Shield. So Bryan has been forced into a feud with Kane.

Kane has been a mid-carder at best for many years now, yet he suddenly finds himself in the title picture.  Even more peculiar, he doesn’t seem to be interested in the championship, just destroying Bryan, yet they feuded for the title at Extreme Rules and no doubt will again at Payback.

The feud has brought us some of the worst acting / writing of the year so far.  In real life, when Bryan lost his father, he was in no frame of mind to perform on that nights Raw, so Kane gave him a beat down with 3 tombstones, which took him off air quickly.  Next week Bryan comes back with Brie in tow, appearing on screen without the belts he worked so hard to win.  These are a strong visual aid that the champion should always be seen with, a sloppy mistake on behalf of whoever was in charge of this segment. 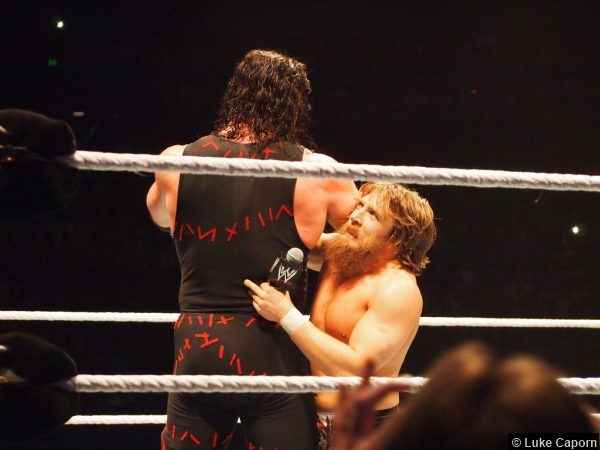 We then had the awful segment where Kane appeared from under the ring via a trap door, and tried to drag Brie ‘to hell’,  This was straight out of Vince Russo’s playbook and something I thought had been confined to the dying days of WCW.  Bryan also came off as weak as Brie had to escape herself.

The match at Extreme Rules was average.  It didn’t feel like the main event when compared to the Evolution / Shield match, even throwing in the fork lift truck and flaming table spot.  The plan was for this match to be the end of the feud and for Bryan to move on to face Big Dave Batista.  However Dave has apparently been unhappy with the way his comeback has been received, so he was rumoured to be leaving after Extreme Rules, which is why after Bryan pinned Kane he did the old ‘sit up’ routine, to give the feud some extra legs.

The next night on Raw, we had some truly awful segments.  We had Kane’s mask appearing mysteriously on the back of Bryans dressing room door.  Then we had Bryan and Brie looking to leave the arena in a rental car (complete with cameraman in the backseat), only for Steph to stop the jumpy couple and order Bryan inside for a match.  To see the champion wanting to leave in a cheap rental car is not the image you want to be portraying about your marquee star.  It’s hardly the jet flying, limousine riding image that Ric Flair used to portray.  We had the car angle again later in the show, this time Kane appeared in the backseat and attacked a screaming Brie.  Eventually they got free and drove off at which point Kane went flying from the roof of the car. Bryan stopped the car to check on him, and when he moved Bryan ran and sped off in the car.  You do not want your face champion running scared.

He has came off very weak in these exchanges.  The writing has been poor, the acting has been awful.  Bryan is not that hot on the microphone, his promos can come across as corny, but he has been let down by the creative team on this one.

We know that Daniel Bryan was never the guy in the eyes of the WWE, so I don’t know if they have given up on him just yet, but his post WrestleMania run is leaving a lot to be desired.  Hopefully after Payback he can move on to something better, but to what I don’t know.  Dave Batista is sticking around to the Payback special event, after that his future is up in the air, but it seems for whatever reason he is no longer keen on working with Bryan.  It’s not like he is against putting over smaller guys, as he did jobs for Mysterio in the past, so something has obviously got his back up.

It’s a shame as they seemed to have a good angle going before Mania where Batista was the big muscle bound bully making fun of the smaller Bryan.  Something like that may have had some legs.  As it is, Bryan is stuck going nowhere with Kane.  He still has the fans onside and the chants are still strong, but as a character to take seriously he has lost some momentum.  His next feud after Kane should give us an indication as to how much WWE actually value Bryan now that the WrestleMania hype has died down.