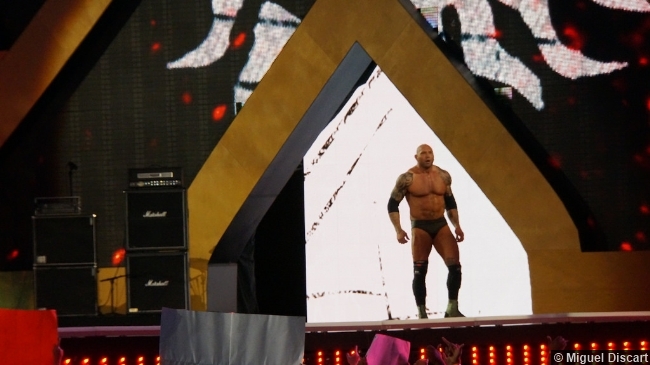 The Wrestling-Online Newsletter is reporting that a disgruntled Batista may be so upset with WWE that he will be leaving a whole month earlier than expected. Tensions are reportedly running high between Batista and WWE management due to “The Animal” being promised certain things upon his return that WWE has not delivered on. In January, Batista returned to WWE after a nearly four year absence. While Batista’s return would get a lukewarm response from the crowd, when Batista won the Royal Rumble Match, the fans turned on Batista completely and the term “Bootista” was born. While Batista’s negative reaction can be blamed on WWE not booking Daniel Bryan to win the Rumble (or even put him in the match at all), a lot of blame can be placed on the former World Champion as Batista’s time away from WWE resulted in a different Batista than the fans remembered as Batista showed up in less than tremendous shape and simply lacked the same intensity that “The Animal” had during his original run. The consistent boos from the crowd left WWE no choice but to turn Batista heel and make some sudden changes to Batista’s run in WWE. After Batista won the Rumble, WWE were clearly building towards Randy Orton vs. Batista for the WWE World Heavyweight Title at WrestleMania, but the fans overwhelmingly rejected WWE’s plans and the change was made to include Daniel Bryan in the main event of WrestleMania. Bryan would go on to win the title while Batista was put into a feud with The Shield, alongside Triple H & Randy Orton.

Batista was originally scheduled to leave WWE in June in order to promote his new movie, Guardians of the Galaxy, but Batista’s frustration with WWE may see Batista leave the company this month. WWE is reportedly doing their best to try and keep “The Animal” happy, even offering Batista a match against Daniel Bryan for the WWE World Heavyweight Title, but seeing as Batista will most likely not win the title, it is unknown if Batista will accept the match.

What are your thoughts on Batista’s return? Post your comments in the box below.