The Road to Wrestlemania is often a grueling path fixed with its fair share of twists and turns. Considering how the original main event has been altered, this year’s road is a classic example. It’s been a long journey, too, but thankfully we’re almost there. Only one more Monday Night Raw to go.

An in-ring promo to open the show. But instead of the Authority, it’s the Undertaker who graces the squared circle. The Phenom hyped up the streak and what he’s gonna do to Brock Lesnar. Before fully signing off with his trademark “Rest in Peace”, he’s interrupted by Brock Lesnar and Paul Heyman, who wisely kept their distance on the stage. After some smack talk, though, they made their way to the ring and execute a successful ambushing with Heyman causing the distraction and Brock dropping the boom. This segmented ended with Lesnar hovering over the Deadman after delivering an F5, arrogant smirk across his grill. 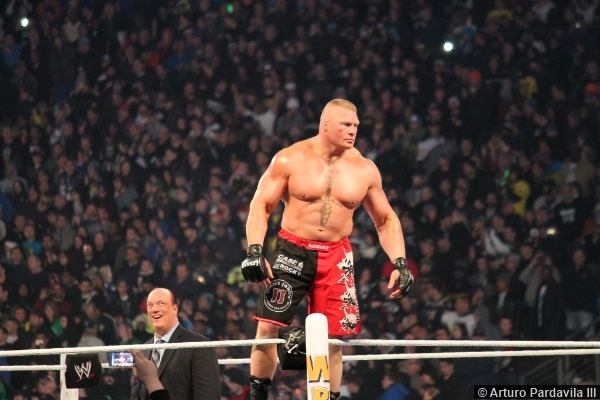 Can’t say I’m any more pumped for this match than I was last week. I was hoping we could get some type of stipulation to up the intrigue, but it doesn’t look like that’s gonna happen. For now, we’ve got a predictable match with lackluster build, and little significance beyond the streak. Does Taker still have it? Can Lesnar get it out of him? I’m not sure, but we’ll see.

Intercontinental Champion Big E took on Alberto Del Rio in the first official match of the night. This was a non-title affair and a solid one at that. It was a fast-paced, back and forth encounter between two dudes who have excellent chemistry. I was shocked to see Del Rio come out on top in this one. After all, Big E has been on a roll while Del Rio is arguably at the lowest point of his WWE career. I think they’re trying to beef up Del Rio a bit. Just so he doesn’t look too weak going into the Wrestlemania battle royal. He’ll probably be the first guy eliminated.

You knew we wouldn’t get through the show without some long-winded dialogue from the Authority. After an extended bathroom break (a diva’s match), our expectations were met. I’ll give it to Triple H – he keeps the promos interesting. The Game reminded the crowd about the Fandango fad of last year, citing how quickly it came and went, suggesting that the Yes Movement will suffer the same fate. The power couple went to great lengths to put Triple H over, verbally burying guys like Goldberg, Jeff Hardy, and Kurt Angle over a cleverly designed video package. They said a mouthful, but wouldn’t leave before being joined by an old friend.

Batista hit the ring, skinny jeans snug, his face deadly serious. Overall he got a warm reception in his hometown Washington D.C., but the boo birds let their voice be heard. Batista boasted over the fact that Triple H has never beaten him. Trips delivered a burn of his own by referencing how Stephanie smacked the sunglasses off his face and the taste out of his mouth last week. As if we hadn’t heard enough talking, Randy Orton joined the promo party and threw in his two cents about the main event. The Viper really didn’t do himself any favors, though. In fact, his tough guy talk led Triple H to make tonight’s match with Batista a No DQ.

After catching our collective breath from that fierce debating, we got some action in the form of an 8-man tag team team match – The Usos and Los Matadors vs. RyBaxel and The Real Americans. We now know that all four of these teams will be involved in a four-way tag team match for the belts at Wrestlemania. Just as you’d think, this one was fast and chaotic throughout. Furious mix of reversals, double teams, near falls, and crazy areal moves. Harnessing their inner Killer Bees, the Matadors pulled the switch and got a weak roll-up win on Swagger. And you said TNA books cheap finishes. 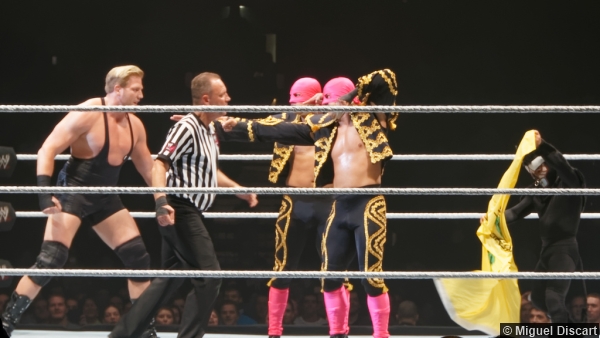 Fandango and Damien Sandow teamed up against Cody Rhodes and Goldust. This was a throwaway match that could’ve been much better. Sandow dropped the fall after eating a Final Cut by Goldie. The sucky streak continues for Sandow, a man who once seemed poised for a world title run after winning Money in the Bank just last summer. I keep thinking they’re gonna breakup the Rhodes, but they just stick around being a decent tag team. Barely even noticeable these days. The post-Wrestlemania season could be a much needed refresher period for all these guys.

Bray Wyatt slaughtered R-Truth. It’s funny. Bray doesn’t necessarily strike me as a “squash” type of guy. Even legends like Flair and the Rock never really squashed guys. But I’ll give WWE credit. They’ve done an admirable job of building him up as a powerhouse and a legitimate threat to guys like Cena. Of course he got a little help from Harper, but Bray Wyatt will always be remembered for systematically dismantling the Big Show on Friday Night Smackdown. Poor R-Truth didn’t stand a chance.

Following the match, Xavier Woods tried to come to the aid of his mentor R-Truth. Bad move. Harper practically turned him inside out with a sick clothesline. The Wyatts went to gloat, then the lights go out. Normal for the Wyatt routine but when the lights come back on, the crazy clan is joined by another goof in a sheep mask. It’s John Cena! The crowd goes wild. Cena goes off. He cleaned house, taking out both Harper and Rowan in a rage. Bray managed to get away but for the first time in this rivalry looked a bit rattled. He may have made, if not awakened his own monster. 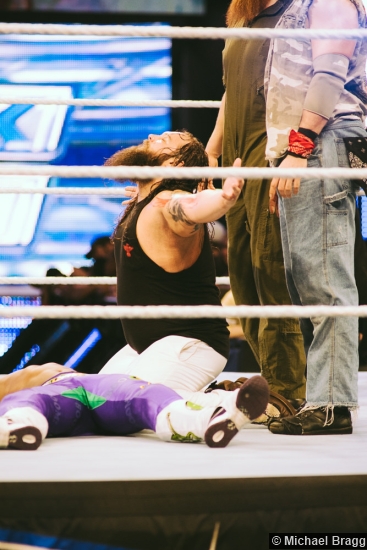 Throughout the night, the guys at the commentating booth had been encouraging us to vote to choose which member of the Shield would face Kane. Roman Reigns got the nod. Surprise. Surprise. What could have been a good match just wasn’t meant to be. Both guys got a few big clubbing blows in before things spiraled out of control. The New Age Outlaws, Seth Rollins and Dean Ambrose got involved, which resulted in Reigns being disqualified. In the end, the Hounds of Justice stood strong, getting a small measure of revenge for the recent beatdowns directed by the vindictive Corporate Kane.

This big night got even bigger when the set for Piper’s Pit rolled out. After revisiting the first Wrestlemania, Piper set his focus to the huge Andre the Giant 30-man Over the Top Battle Royal. This routine brought out several participants, starting with the Miz, Sheaumus, Titus O’Neal, and Dolph Ziggler. The brawl started with these guys, but attracted several more participants to the ring. What you had here was a glimpse of things to come as dudes were getting dumped left and right. Big Show was the last man standing in the ring, earning Piper’s endorsement as the favorite.

Here’s your original Wrestlemania 30 Main Event: Randy Orton vs. Batista. Big fight feel. Big enough to bring out Triple H and Stephanie to provide guest commentary. This was a good a match that seamlessly transitioned into a thrilling climax. Orton and Batista fought all over the ring and ringside area, pulling out chairs, kendo sticks – all the stops. The plot thickened when Daniel Bryan blindsided Triple H at the announce table and lumped him up pretty good. Orton and Batista tried to play spoiler, but Bryan fought them all back. While he didn’t completely avenge the shellacking he sustained at the hands of Triple H, it was Daniel Bryan standing in the ring alone, leading a thunderous “YES!” chant at the end of the show.

Pretty good show considering the card and the current WWE experience. Cena vs. Wyatt looks a bit more interesting, and I’m even more curious to see who gets the honor of winning the first Andre the Giant Memorial. Orton vs. Batista was brief, but even in that short time span showed that the main event wasn’t necessarily doomed to be a disaster. There’s still time to wrap up whatever loose ends on Friday Night Smackdown. With that said, this episode did it’s job of thrusting us into Wrestlemania mode.