THE GOSPEL ACCORDING TO WWE: Why there’s nothing quite like the thrill of Pro Wrestling

Have you ever tried explaining Pro Wrestling to a non fan? It’s maddening.

I’ve never understood how “it’s fake” became the go-to stigma that was attached to it. Are the matches pre-determined? Yes. They have been since promoters started paying guys to take a fall back in the days of the traveling carnival. Are the two guys actually trying to hurt each other? Of course not. Do people, other than children, really believe that? Honestly, if you told me you were shocked that I was a fan because “you know it’s not real, right?” I would be just as shocked at you for thinking I believe it to be real.

Why does Pro Wrestling have to constantly fight to validate its existence? No one watches the TV show “House” and thinks “man that doctor is a miracle worker…and he’s only got one working leg!”

And yet if you tell someone you are throwing a watch party for the next WWE PPV they will say “you do know that stuff’s all pretend, right?”

What’s funny to me is how those same people will watch whatever reality TV garbage is popular now and think THAT’S real. But try and tell them it’s fake and see what happens. “You know that’s scripted. That Duck Dynasty guy didn’t just HAPPEN to get invited to some horse farm and hijacks didn’t just HAPPEN to occur while the cameras were rolling.” And they will look at you like you have no shame.

Pro Wrestling is perhaps the most unique brand of entertainment in existence. It is an amazing blend of choreography, scripted drama, real life physical abuse, miming and bravado. And yet for all the hype the WWE puts behind their product in a desperate attempt to keep it relevant in pop culture, the fact is that it will always be looked at as the red-headed step child OF pop-culture. There was a brief moment in the mid-80’s when it was “okay” to be a fan. Since then…no. Sure there was the renaissance of the late-90’s, but even then there were a great number in society who were happy to deride you for enjoying it.

I re-watched the opening segment of WrestleMania 30 last night. I missed a lot of it because we had several people over for a watch party and, while that’s fun, you miss a lot of the little things due to the constant chatter. I didn’t think either of the three superstar legends were at their best, though Rock was as good as he had been since he came back. Hogan now-infamously transported himself to Detroit and Austin kind of stumbled over his lines. But so what; it didn’t matter because for a few brief moments, the three biggest guys the “business” ever produced shared the ring and just saluted their respective achievements over the past three decades. 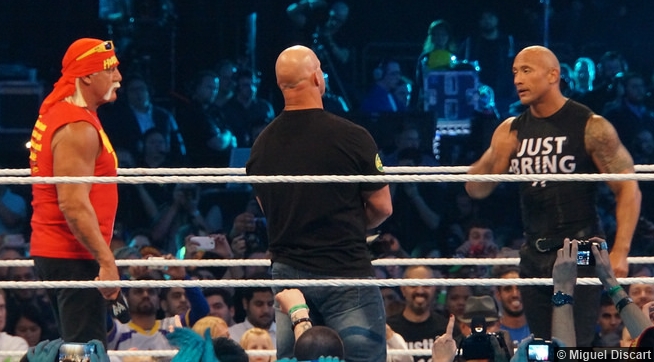 That’s why it’s real. The blend of scripted performances in a live environment is exhilarating. I can only imagine what it must be like to do it for a living (which probably explains the occasional jitters and flubs that happen to even the best of them). You can’t “fake” the kind of emotion shared between those three men, and you can’t “fake” the emotion I felt watching it.

Just the other day I watched the WarGames match from Wrestle War 1992. The match was thrilling, the commentary (Ventura and JR) electric, the crowd euphoric. From start to finish the match was incredible but there were two moments in particular that stood out. Early in the match, the countdown was rolling along “10-9-8-7…” It was soon to be time for a new combatant to enter the fray. Just as JR asks “Who’s it gonna be?” the camera cuts to Steamboat, and he is shaking with anticipation. Is it scripted? Sure, in the sense that the actor knows how to sell the right emotion for the audience. But so what. Ask any actor in the middle of an emotional scene if they are “faking it.” They’d throw you off the set. An actor draws that emotion from somewhere; somewhere real. And the audience can feel it, even if it’s been 22 years since it happened.

The other big moment came later in the contest. Madusa had climbed onto the cage in order to offer assistance to her team below. Suddenly Sting pops up onto the cage to scare her off. The crowd went nuts. I, having not seen it in ages, dropped my jaw, completely engrossed in the moment. THAT’s the magic of it. Do I know it’s scripted? The question ought to be “Do I care?”

And unlike other forms of entertainment, the song doesn’t end after 2 minutes. The credits don’t roll after 2 hours. The show doesn’t go off the air after 2 seasons. The stories keep going and going. I’ve been watching weekly since late 1999. My first episode featured the reformation of DX not long after Triple H won his first championship. Since then I have seen superstars come and go, storylines take every conceivable twist and turn and watched rivalries turn to alliances and back to rivalries. It never ends and because it never ends I can never fully pull myself away. That’s probably why there is no “off season.” If it went away, even for a few months, would I have already moved on to something else?

The one constant over the years has been the thrill, the excitement, the occasional “mark out moments” that make us forget all the other crap we sat through and let’s just soak in the drama and pageantry of the pseudo-sport.

I’m sick of having to defend Pro Wrestling and my love of it. With the US launch of the WWE Network it’s time to go from defense to offense.  It’s time to start actively recruiting people—even if they have never watched a single match—to give it a look. There is history being written every Monday night, filled with drama and action, heroes and villains. It’s time we start taking that message out there and expanding the fandom. It’s time we take it upon ourselves to usher in the next Pro Wrestling “boom.”

It’s time we start preaching the gospel of the squared circle.