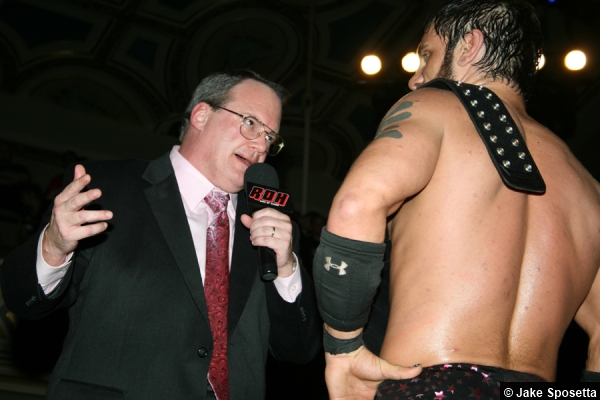 PWTorch.com is reporting that Ring of Honor has announced that, starting June 22, ROH will be making their debut in the traditional pay-per-view market. For the past several years, ROH has held their pay-per-view events exclusively online (IPPV), but starting with the “Best in the World” event in June, ROH will arrive on major cable and satellite providers. ROH will be joining TNA and the WWE in the pay-per-view market, but will not go head-to-head with either company (in June, ROH will air the “Best in the World” event on the Sunday between a TNA pay-per-view and a WWE pay-per-view). ROH will air their pay-per-views in the usual 8/7c time slot and will cost $24.95 for the standard definition presentation. ROH’s last two internet pay-per-views will be a special joint production with New Japan Pro Wrestling on May 10 and May 17. ROH World Champion Adam Cole, Matt Hardy, Kevin Steen, ROH TV Champion Jay Lethal, The Briscoes, & Maria Kanellis are all scheduled to be a part of ROH Best in the World on June 22.

ROH COO Joe Koff commented on the big move for ROH, “Fans hungry for the best wrestling in the world will now have access to their favorite brand of wrestling from the comfort of their couch in stunning high definition, which is something our customers have been demanding for some time. We’re happy to deliver on that starting this June with Best in the World.”

Will you be watching ROH on pay-per-view? Post your comments in the box below.