The story of Steve Austin’s journey from mid-card bore to main-event sensation is the stuff of legends. He was not an heir-apparent in the mold of Randy Orton. He was not pushed because the fans wouldn’t shut up about him, like Daniel Bryan. Austin was a guy with one person believing in him: himself.  Through his own will and self-determination he shed his Ringmaster persona and slowly added more and more of his own (turned up to 11) personality, eventually becoming the Texas Rattlesnake Stone Cold Steve Austin that fans now revere. 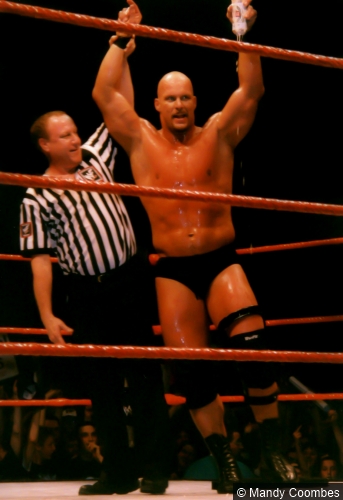 Austin’s journey from upper-card player to top-dog is also among the more unique in WWF/E history. It’s hard to replicate the particular circumstances that allowed him to break out and become the top wrestler in the WWF. He climbed out of the midcard with a King of the Ring win in June of 1996 (capped off by the right celebration promo at just the right time), and by the end of the year was one of the promotions top heels, feuding with Bret Hart.

Austin’s place in the company around Survivor Series 1996 was comparable to CM Punk’s spot in mid-2009. Recall that Punk was arguably the top heel on Smackdown, but company-wide was maybe the 4th most important heel on the roster. Austin was a top guy, but he was hardly THE top guy, even with a hot match against Bret Hart on his resume. 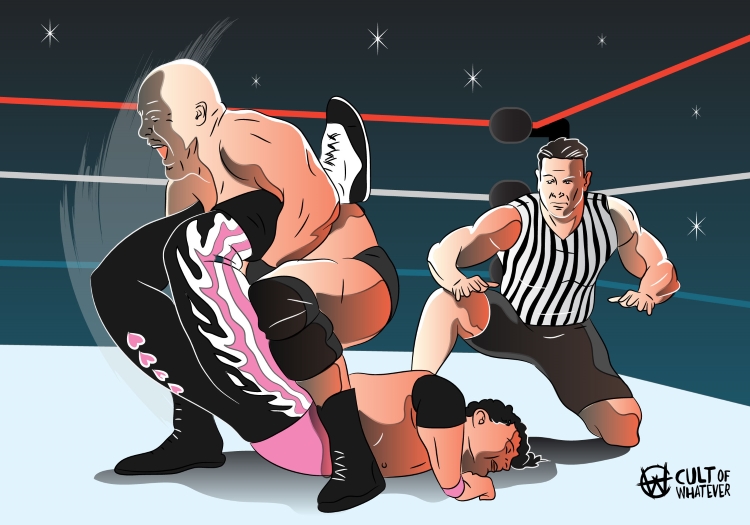 Though the WrestleMania 13 submission match against Hart solidified him as a babyface, and though the rest of 1997 featured Austin as a superstar growing in popularity with each passing week, his place on the card had stagnated. At best he was the number 2 babyface on the roster, behind Shawn Michaels (who, like Austin, split time between a heel and a face depending on which part of the US/Canadian border he was on). It seemed that there was a ceiling over his head preventing him from achieving his goal of being the #1 superstar on the roster.

With Hart gone to WCW the dynamic of “face/heel/US/Canada” that drove much of 1997 went with him. Shawn Michaels became champion and a heel everywhere and finally Austin was given the opportunity to be the babyface challenger at WrestleMania 14. One Tyson three-count later and “the Austin era” had begun.

Daniel Bryan’s popularity and connection to the live crowds is often compared to Steve Austin’s. Personally, I think he needs a few more catchphrases and a little more time before that comparison has any real merit. But there’s no doubt that Bryan is as universally over as anyone since the days of Steve Austin and The Rock. So how does Bryan’s first promised title defense against Kane compare to Steve Austin’s first title defense in 1998?

By virtue of Shawn Michael’s broken back and the still talent-depleted roster Vince had been struggling with since the Spring of 1995, there really was only one big opponent on the radar for Steve Austin—the Undertaker—and that match had to wait until SummerSlam. In the meantime Austin had to be kept busy. First up…Dude Love.

I wonder, if the internet had been as prominent then as it is now, would the fans then have been so vocally opposed to Austin (the self-proclaimed “toughest SOB in the world”) having to fight a dumpy disco loving wannabe ladies man like Dude Love?

Now don’t get me wrong, I love Dude Love. But it comes in third (of three) when ranking Mick Foley’s alter egos, if your basing them on title-contention and credibility as a challenger. Austin wrestled Foley-as-Love not once but twice (in April and May). Is that what you call a rocket-propelled start to the man who would usher in a Pro Wrestling boom?

And then in June Austin lost the title! To Kane!

Granted, Kane in 1998 > Kane in 2014. But still, this is the guy who lost twice in a row to Undertaker (at WrestleMania 14 and at the April “In Your House” event). Going into the King of the Ring match with Austin, Kane was coming off a not-so-impressive win over Vader at the May PPV. He wasn’t exactly a man on fire (no pun intended).

Austin lost the title but of course he won it back the next night on Raw. Still, fans were shocked and furious that Austin’s title run had been cut so short. This was a new era, however; title changes were becoming more commonplace. The emphasis was not on how long you held the belt in one stretch, but whether or not you were the top star.

Case in point: July’s PPV featured—not a WWF Championship match—but instead, Austin in a tag title match as the main event. The story of the attitude era: position > championship. Austin was the champion, but that was secondary to his being in the top story in the company.

Austin went on to main event SummerSlam against Undertaker, retaining the title. Plans were then put in place to elevate new stars to the main event scene. Austin lost the title in September, which eventually led to a tournament set up, won by the Rock, which also elevated Mick Foley from B-show title contender, to “Mankind, WWF Champion.” Through it all, however, Austin remained the focal point of the show. He was “Raw is War.” It didn’t matter who he feuded with or whether or not he had the belt.

So what about Daniel Bryan? People think they are wasting his title defense against Kane. I’m sure there were some ready to see Undertaker vs Austin in April of 1998, but you have to let these things marinate. People are worried about when Bryan will lose and slide down the card, but a title loss doesn’t automatically assume a loss of his spot. The question to ask is “Is Bryan the top story on the show, week in-and-week out?” So far the answer is yes.

Obviously there is more starpower to go around than there was in early 1998, with Evolution vs. the Shield and Wyatt vs. Cena rightly taking their share of screen time. And Bryan’s wedding, followed by the passing of his father, certainly kept him off of TV more than was probably expected in his first post-WrestleMania weeks, but still: This is the guy who spent the latter half of 2013 either opening or closing Raw after Raw after Raw. WWE knows what they have with him: A match against Kane is not a sign that they have no faith in his title run, anymore than a feud with Dude Love and numerous title losses in 1998 meant a lack of faith in Steve Austin.

Now, if Bryan doesn’t put away Kane, say…by mid June, or if he loses the title and starts feuding with Fandango, then you can panic. Don’t expect it to happen though.

Next we take a look at the championship reign of Chris Benoit and see if his run with the belt is an omen predicting doom for Daniel Bryan’s reign.