Shawn Michaels had no business being a WWF main-eventer. He was too small: He was smaller than Ric Flair who dominated in the Jim Crockett/early-WCW days. He was smaller than Bret Hart who was the first post-Hogan face of the company (and disregarded by guys of that era for his size). He was dwarfed by men like Hulk Hogan, Randy Savage and Ultimate Warrior. Even the guy he worked with in his career-defining mid-card feud—Scott Hall—towered over him.

And yet, by virtue of endless charisma, a second-to-none workrate and an ability to rise to the occasion whenever the spotlight was on him (and even when it wasn’t he still stole the show), he managed to break every stigma and stereotype that existed in the world of Pro Wrestling.  Guys like Daniel Bryan owe a debt to Michaels for blazing the trail that said “little guys can be top guys” and in 1996 he proved that he belonged in the main event scene after breaking the 60-minute draw with Bret Hart and winning the WrestleMania 12 Iron Man match. That win not only awarded him the WWF championship, it also—by virtue of Bret Hart’s hiatus—put the spotlight solely on him as the top babyface of the WWF.

Unlike with Bret (the subject of yesterday’s article), Shawn’s win at WrestleMania 12 was immediately followed by a PPV. Bret won in the era of “the big four” where months went by before another PPV event. HBK claimed the title and, one month later, was set to defend it at an “In Your House” special. With monthly shows now the norm, we’re able to get a better read on how strongly Shawn was pushed as compared to Bret. This also will allow for a truer comparison to Daniel Bryan’s post-championship push.

You might be tempted to write off any comparisons between Bret in 1994 and Shawn in 1995 since Bret only had three PPV events with the title (King of the Ring, SummerSlam, Survivor Series), whereas Shawn had eight. But the fact that Bret did not main event any of the three PPV’s speaks volumes to how the powers that be viewed him as champion.

Shawn, on the other hand, main-evented every PPV he was on (there was one In Your House where he competed in a dark-match only) from WrestleMania 12 until his Survivor Series loss to Sid. He then missed the next month’s PPV (again working the dark match) before winning the title back at the Royal Rumble.

Despite being the smallest man to hold the WWF title at the time, Shawn was positioned strongly. With the talent not nearly as strong as it was in earlier years (Razor Ramon was gone, Diesel was gone, Hart was on hiatus), Michaels was well positioned as the top attraction in the promotion.

The problem with Michaels’ first title reign was not his positioning, it was the quality of the opponents he had to work with. He had a lengthy feud with British Bulldog but the two did not set the box office on fire (not even the international numbers were great). He had a big money bout with Vader at SummerSlam but it didn’t do nearly the amount of money they hoped for, largely because Vince and co. had failed to push Vader the way he was positioned in WCW. Shawn had a memorable match against Mankind at the “Mind Games” show, but it was a one-off, and though it was perhaps HBK’s best match in his first title run, it wasn’t a match that sparked a boom in business. 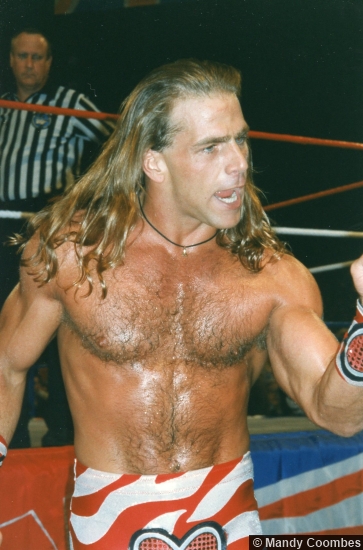 After Mankind, HBK didn’t even compete on the “Buried Alive” show; he wrestled Goldust for the title in the dark match. 1995 may have been looked at more harshly by fans, but at least there was starpower in the promotion (it was just horribly managed). 1996 had a much leaner roster, but not for the better. In the end that hurt Michaels’ first run as the top dog in the company.

Will Daniel Bryan suffer the same fate? Unlike in 1996, the roster today is loaded with talent. There are established main-event guys who could easily draw money against Bryan (Cena, Orton, Batista, Triple H, Lesnar). There are top level guys who could—with a little creative push in the right direction—be positioned as legitimate threats to Bryan’s championship (Kane obviously, Wyatt, Sheamus, Big Show). And there are mid-card guys who can easily be brought up to challenge Bryan and compete on his level (Cesaro, Barrett, Cody Rhodes). Not all of these guys are “legit” enough to main event SummerSlam for the title, but they are either talented enough or established enough to get at least one money match out of Bryan, either as a TV main event or on PPV.