The first Monday Night Raw of March, 2014 emanated live from Chicago. With the controversial status of local favorite CM Punk in the picture, this was easily the most anticipated episode of the young year. Would he make an appearance? Would the Chicago crowd hijack the show as hinted across the Twittersphere? Let’s rewind and find out how it all went down.

Trolling From the Opening Bell

It seemed as if we wouldn’t have to wait long for the answer to our first question because Raw opened with Cult of Personality blaring over the PA system, prompting the crowd to go bananas! But rather than CM Punk, it was his former manager and friend Paul Heyman who made his way to the ring. Heyman let us know he’s ready to drop a pipe bomb of his own. Amid thunderous CM Punk chants, he explained that the self-proclaimed “Best in the World” won’t be in attendance, for whom he blamed the fans, and the man he failed to beat at last year’s Wrestlemania – the Undertaker.

Business picked up when Heyman’s new bestfriend, Brock Lesnar, hit the ring. Electing to do his own talking for once, Lesnar grabbed the mic and proceeded to verbally assault the Deadman, basically labeling him a coward. The confident duo prepared to make an exit, but were cut off by a vengeful Mark Henry. Lesnar and Henry commenced to brawling at ringside, entangled in a lopsided slugfest that ended with the World’s Strongest Man being put through a table. The Chicago crowd popped for CM Punk during most of the brawl, letting us know it would be one of those nights.

The Punk chants carried over into the first match of the show, which pitted tag team champions the New Age Outlaws against the Usos. This bout wasn’t anything special, but the outcome was. After countless opportunities, the Usos finally captured the titles. If you’re anything like me, you’ve been waiting on this for years. The gifted offsprings of Rikishi Fatu have consistently been one of the most entertaining teams on the roster, and after thinking they’d never fully get over, it’s nice to see them rewarded for all the hard work. Could’ve been more special had it happened at Wrestlemania 30, but I’m sure the twins will take it.

Big E and Cesaro was essentially a rerun from last week, so I’ll skip to another highly anticipated moment – the Elimination Chamber rematch between the Shield and Wyatt Family. Just like at the PPV, chants of “this is awesome!” rang out before things could even get underway. Ambrose and Rollins literally jumpstarted the match by leaping out of the ring and pouncing onto Harper and Rowan on the floor. Meanwhile, Roman Reigns took it to Bray Wyatt in the ring. Utter chaos everywhere and then we finally get a bell.

If you missed the six-man match at the PPV, this one made up for it. The WWE Universe threw in a few Punk chants, but not even that foolishness could ruin what was brutally sweet poetry in motion. These two factions put on a clinic with passion reminiscent of the Freebirds vs. Von Erich’s – of course with less botching and better overall execution. In the end, it was the Wyatt’s taking the win again, courtesy of Seth Rollins walking out on his teammates . Yep. The ole avoid the hot tag and hop off the apron swerve. This is how the Shield dissolves? The glue that undoes the bond just walks off? That’s how they’re rolling for now. 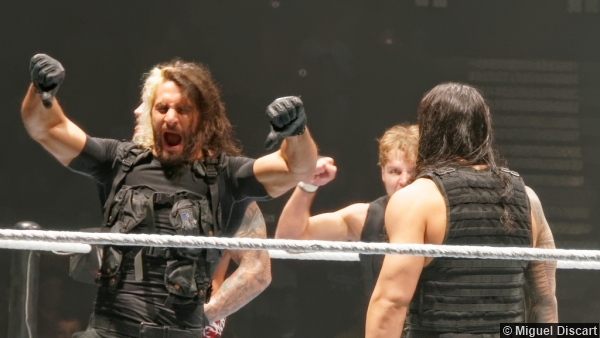 We simmered down a bit with a Batista backstage promo, which plugged our main event between the Animal and Daniel Bryan. Then came a mixed gender match with Santino and Emma against Fandango and Summer Rae, which gave the crowd ample ammunition for more chants of “CM Punk “and “Dolph Ziggler”, for some reason. For those watching at home, it was probably an extra bathroom break. Can’t say I’m digging anything involving either of these four performers.

The action resumed with yet another rematch between Sheamus and Christian. Deja vu here. Another quick match featuring solid action, yet delivering the same results – Sheamus beating Christian. Although I thought it was decent, the crowd displayed otherwise, showering the superstars with “this is awful!” and “CM Punk” chants. These two guys deserve better than this, Christian especially. Hopefully this is the blowoff for a onesided feud that doesn’t appear to be doing much for either man, outside of paying the bills, obviously.

Some lengthy promo action served as the appetizer before the main course. Poor John Cena got butchered by boos and Punk chants while attempting to play up the Wyatt feud and his injury. Bray retorted with a promo backstage, but thankfully for Cena, the family didn’t make an appearance. We also got a Daniel Bryan promo, which drew out the Authority. The crowd was fully engaged in this segment, loudly calling for the hometown hero, in between booing and calling Trips an “A-hole”. Bryan pushed hard for a match with the COO, who managed to avoid the challenge while trolling the crowd pretty hard himself. Instead, Bryan got an appearance by Kane, who he attacked in such a rage that security had to be called in to pry him away.

By time we get to the main event, it’s darn near 11 pm so I’m expecting something brief and explosive. With Randy Orton at ringside, Daniel Bryan dominated much of the match with Batista before the Authority, Kane in tow, paid a visit. Randy Orton ended up getting involved to attack Daniel Bryan, giving him the DQ win. Back against the wall, Bryan threatened to clean house with some spirited offense before being speared by Batista – and then the beating ensued! For the trouble of kicking Trips in the face, Daniel Bryan ate both a Batista Bomb and Pedigree from two men who on the surface at least, appear to have their own agendas. The show ends with the Authority standing over a broken Bryan and the crowd calling for CM Punk – still. 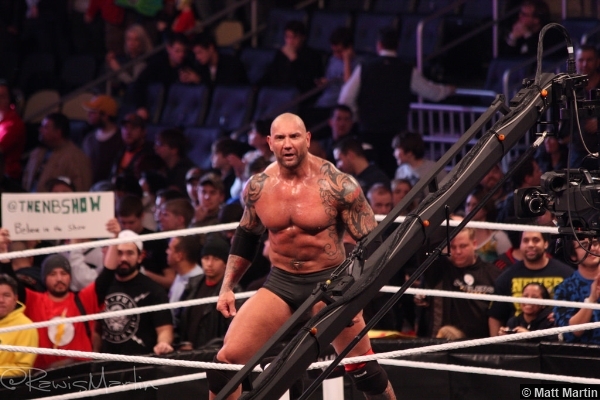 This episode of Monday Night Raw was interesting to say the least. The Chicago chapter of the WWE Universe played a role and in their minds, I guess, effectively hijacked the show for whatever it’s worth. Though not yet official and in kind of lame fashion, the Shield split is in effect. I smell a three-way dance for the U.S. title coming next month. Daniel Bryan also absorbed another beating while inching his way closer to a Mania match with Triple H, or maybe even the main event. The energy from the Windy City crowd certainly created the atmosphere for what turned out to be a chaotic evening of rasslin!