The flash first fall Sami got made this basically like a World of Sport handicap match where the young boy starts a fall up; he only needs one pin but a win still feels just out of reach, because the heel is that unstoppable. Great action that builds off key moments in previous matches, along with awesome spots like the turnbuckle DDT. The finish is simply astonishing. And if you haven’t seen NXT Arrival yet…what’s wrong with you?!

This is The Shield match where: Hunter fed them to the rebelling babyfaces to keep them in line; Reigns speared everyone in sight before going down to a mega babyface combo; Rollins was left all alone and suffered the consequences. It’s not often a 11 on 3 babyface advantage makes perfect sense or gives us a great match, but both were accomplished here.

This is The Shield match where: the entire second hour of Smackdown was devoted to the glorious art of tag team wrestling. It may be cheating putting three matches in one spot, but they were really just three parts of what I like to call the Tag Team Hour. The original 2 vs 2 match was amazing enough already, and then we kept getting more and more and more. Literally everyone was awesome. A wholly unexpected and magical gift of wrestling TV.

16. Cody Rhodes & Goldust vs Rollins & Reigns vs The Usos – Tag Team Championships (Hell in a Cell)

This is The Shield match where: Goldust works one of the most epic extended peril sequences ever; the Usos are shut out of the match and get frustrated; it all breaks down into non-stop nutty action culminating in the SUPERPLEX TO THE FLOOR. Shades of Superstars! An awesome, balls-out three way.

This is The Shield match where: the crowd chanted “THIS IS AWESOME” when nothing was even happening; Bryan made an epic Bryan Hot Tag featuring Rollins taking a German on top of his head, a sky-high back superplex and a Tree of Woe dropkick in the corner; Rollins tried stealing the Bryan surfboard to his peril; Bryan tried a knee off the apron and got SPINEBUSTERED to death leading to Rollins hitting the flying knee on Kane. A great long tag match.

This is The Shield match where: all of the various angles at play in the Authority storyline come together in the drawn-out brawl that ends this match. The Rhodes Brothers fight for the titles, The Shield fights, Big Show fights for revenge and redemption, and Hunter is spoiling for a fight while the crowd chants “YES!” for the guy fighting the good fight. This was the last feel good moment the angle produced.

A brilliant return to form for Sheamus. These guys have awesome chemistry, and just go all-out beating the bloody hell out of each other. They also know how to keep building a match until it really reaches that higher level, and this gets epic. Wonderful, hard-hitting, athletic heavyweight-style wrestling.

And this was even better. Cesaro was other-worldly at this point and Sheamus was hitting his 2013 peak, and they combined here to perfection. This had everything: cool matwork, gritty struggling, nasty strikes, smart counters, payback spots, feats of strength, and seriously big bombs. This is as good as big man wrestling gets, and hopefully they get another go at it soon enough.

This is The Shield match where: so many great details add up to a fantastic match; The Shield and Two Large Black Guys are amazing just standing at ringside, with Henry selling the spear and Reigns’ trash talking being the highlights; Rollins gives his career performance and looks completely natural dominating John Cena; Cena sells like it’s 2007; Rollins lands on his feet in that awesome counter; Cena wins and proves himself the “Big Game Player” JBL claimed he was. Awesome TV wrestling.

This match was so good it’s the sole reason they brought Emma up and paired her with Santino for no reason. Don’t hold that against it though, this match was like a Marx Brothers skit come to life in a wrestling ring and was completely glorious. Every single second of this was entertaining as hell, from the entrances through the finish, and everything in between. Fandango was amazing as a stooging heel, and this was the match Santino and Emma were born to wrestle. If the main show version is even half as good I’ll be happy.

Who would have thought giving Bryan 40 minutes in the main event would work? The Swagger match was a fun thing, and the Ryback match was actually really good with Bryan selling two matches and making yet another desperate comeback. But obviously, this is all about Bryan vs Cesaro. The two best in the world go out there for 15 minutes and just tear it completely up, complete with the Alpamare Waterslide, Euro uppercut battles and THAT rollup finish.

You all voted it MOTY. I wouldn’t go that far, but it was excellent. It draws on recent history without trying to be the matches that came before it, continuing the story of Taker growing old and approaching mortality. Every year he still pulls it out, but it takes a little more out of him each time. Punk kicks out of the Tombstone, not because FINISHER KICKING~! but because Taker is holding onto his last gasp of transcendent power, and in the face of opponents who seem to draw strength from the challenge and wrestle out of their skin to force the issue, one Tombstone just doesn’t do the job anymore. But nevertheless, he still finds a way out, year after year. For how long though? 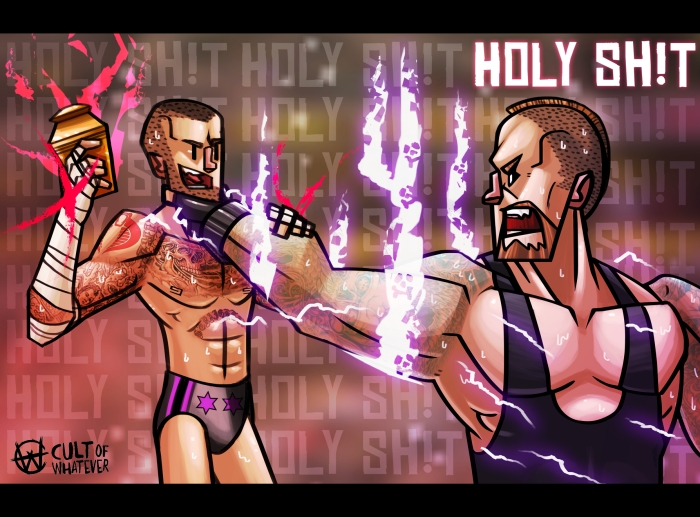 Has there been a double-turn like this since Deadly Games? I doubt it. This was an amazingly effective use of Dolph’s real-life concussion to create a super compelling match and turn both guys towards where the crowd wanted them to be. As the match goes on, Dolph’s head takes more and more of a pounding, Alberto gets more and more vicious and callous, and Dolph shows more and more heart and desperation. By the end, Alberto looks like a monster, Dolph goes down swinging, people are crying in the crowd, and everybody wins. Too bad they never capitalised on it, but as a one-off event, it’s awesome.

The most violent WWE match of the year. The yearly Regal vs Indy Dude events are always a treat, and this one is just amazingly gritty and nasty. Regal tries to break every one of Ohno’s fingers, leading to Ohno having to pop them back into place mid-match. Ohno tries to kick Regal’s face in until he dies, leading to Regal looking like he was very nearly murdered via face kicking. The selling from both was phenomenal, the shots were brutal as hell, and the finish rules. An awesome piece of brutality.

This is The Shield match where: everything clicked to an almost scary degree; the emotion present from the Rhodes family angle was palpable throughout this match; Goldust put on a crazy performance that announced his return as a top level worker; even the announcers called it properly and added to the atmosphere; BIONIC ELBOW; the Rhodes boys win, good vanquishes evil, the people go banana. This is one of those perfect segments where everything is so good you almost can’t believe that WWE dreamed it up and executed it. But thankfully, they did. The feel good moment of the year.

This is The Shield match where: they proved to be pretty good at this six man tag business; Sheamus and Roman get into a big man battle that extends all the way to the finish; John Cena sells his ass off; Ryback gets a hot tag to a massive pop; The Shield play their isolation game to take out Sheamus & Cena before getting Ryback with a mid-Shellshock spear. It’s kind of amazing that after the 2013 The Shield had with all of those great matches (and they take up an entire third of this list), and how much they’ve improved as workers, their first two televised matches are still the best ones they’ve ever had. At least they were until the Wyatts match happened.

These two can do no wrong together. Since MITB Cena and Punk had been ratcheting up the counters, wacky moves and more counters to ridiculous degrees, and it all came to a head here, which made it feel like the blow off to their entire feud. Both guys know each other’s game so well and and are made to work for EVERYTHING they get. The only way to get ahead now is to bust out something completely new to surprise: the Batista Bomb, the God damn piledriver (~!) and finally the Cenacanrana that got him his “first” win over Punk. This is the in-ring feud of this generation.

What an unbelievable war. My God. A Hunter-less Brock came out and showed us exactly what we’d been missing for 12 months, and for half an hour he once again looked like the best wrestler in the known universe by a fairly substantial margin. He is phenomenal. And honestly I think underdog babyface is Punk’s best role in the ring. He was great selling his ass off and making the big comeback down the stretch. Such a brutal, epic war, the likes of which we only see when Brock Lesnar is in the ring.

Show of the Year indeed. I had no idea how anything was beating Punk/Brock, and then an hour later, something did. That something was a Cena main event, Bryan getting his title shot on PPV, over thirty minutes of awesome work, and Bryan pinning Cena clean in the main event of Summerslam to win the WWE Title. This is everything that main event wrestling in WWE should be: great work, stories told, big time heat, and a result that meant something. I don’t think I’ve ever marked out so many times in the one match, and I was frequently struck with a simple thought: this may be the coolest match I’ve ever seen. Nothing beats that. 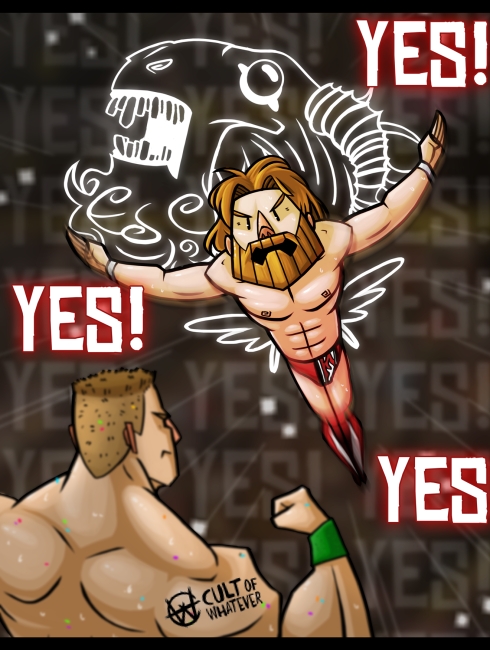