This week, Monday Night Raw opened up with John Cena in the ring, a nice treat for fans who’ve grown bored of the Authority reruns. Not so much for those who have no appreciation for a wholesomely gut-wrenching John Cena promo.

The Cena haters barely had a chance to let their boos be heard because not long into his promo, Cesaro arrives with Zeb Colter in tow to crash the party. Both talking cash smack, Cena and Cesaro look as if they may be ready to come to blows in the center of the ring when Sheamus decides to interrupt and pitch in his two cents.

Big Pasty threatens to Brogue kick both their blocks off in the Elimination Chamber. Tonight, however, he promises to deliver a Brogue to Randy Orton, who he’s scheduled to face in the main event.

Christian is the next to interrupt, and has a special message for Sheamus. Captain Charisma promises to avenge the accidental Brogue kick he ate on Friday Night Smackdown with a Killswitch he says won’t be on accident.

Christian’s tough guy talk is cut short by Randy Orton, who singles out Cesaro for his lucky win over the champ on Smackdown, then proceeds to verbally lay into everyone else.

Orton is interrupted by Daniel Bryan, who is accompanied by thousands of loud “YES!” chants. With all six Elimination Chamber participants in the ring, Bryan goes into a bit about why he’s destined to walk into Wrestlemania as the new WWE World Champion. But even that is shortlived because Kane is next to play spoiler.

Empowered by the Authority, Kane says he’s in charge for the night and commences to play booker. The big red sellout, as the crowd reminded him, set up Cena vs. Cesaro for later, and Christian vs. Bryan after the break. Thankfully, it was time for business to pick up!

Daniel Bryan and Christian teased us to what could easily be a classic if given the proper attention. This match was solid, but left me with a sour aftertaste when Christian, playing the heel role, lost to what looked to be a faster than usual three count. For Bryan, though, it was only a prelude to the match against his next opponent – Kane, who sat ringside. Only thing was, this wasn’t really a match. It was more like a mugging! Kane dominated his former tag team partner both in and out of the ring. He was not deterred by a DQ loss as he thrashed Bryan through the bell, and left him lying there a broken superstar.

Seems like going into what could be an extended feud with Randy Orton, or all new feuds with Batista or Triple H, we’re getting a mini rivalry between former Team Hell No partners. At this point, Bryan’s Wrestlemania opponent is drawing more attention than speculation on who’s next in line for a shot against the Undertaker’s streak.  And while it could be anyone, I just don’t see it being Kane. The WWE Universe would riot!

After being tortured to Fandago and Santino Marella, things start to pick back up as Mark Henry looks to redeem himself after last week’s beatdown at the hands of the Shield. Henry vs. Roman Reigns doesn’t look good on paper and looked even worse in real life. I wasn’t expecting a technical masterpiece by any means. Guess I was expecting a little more than what I got, though, which was the World’s Strongest Man getting his rear end handed to him by rapidly rising superstar Roman Reigns, who secured the win with a Super Man punch and spear. And you know what that means …

An eerie Wyatt Family promo chanting fortunes of destruction and despair after the match. We’re actually taunted with a brawl as the Wyatts flicker their way to the ring and have a staredown with the Shield before eventually backing away and making us wait it out yet again. The cryptic rhetoric has gotten a bit tiresome, but their six-man encounter will surely be one of the more anticipated matches comes this Sunday.

In what I thought was match of the night, Cesaro looked plenty strong against John Cena. The superstar born Claudio Castagnoli maintained the upper hand for a large part of the match, and even hit his signature Cesaro swing on Cena. He lost clean, but I think an impressive showing, a recent win over Orton, and having a spot the Elimination Chamber altogether says WWE is at least considering what the “Very European” grappler could do with a decent push. Cesaro has been hearing it from the crowd lately in a good way, and even helped garner a “this is awesome” chant amid the Raw match against Cena. 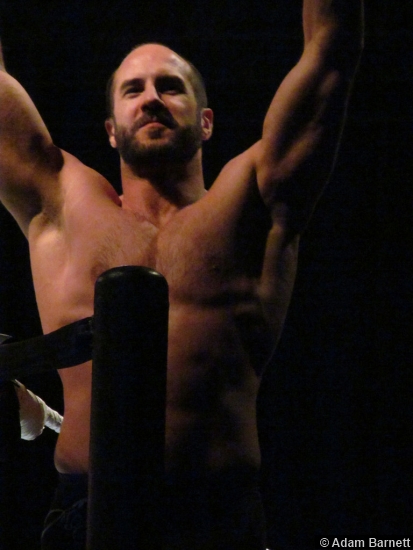 A Brawl for All

The night chugged along with some less than stellar filler stuff, but finally we made it to the main event. Sheamus is no Kurt Angle, but similar to a younger Batista, he’s one of those guys that can brawl his way to a good match. We saw that in the bout against Orton as the two clubbed and clobbered one another in and out of the ring. This was as about as close to a draw as you could get until Sheamus hit three consecutive Irish curse backbreakers to seize the momentum. Orton was poised for a Brogue when the Shield stormed the ring and ambushed Sheamus. But that wasn’t half of it!

John Cena, Daniel Bryan, and Cesaro all came out to fend off the Shield. The lights go out and flick back on to reveal only the Shield and the Wyatt Family standing in the ring. A brawl commences between the two factions, prompting all six Elimination Chamber participants to spring back to life and join in the mayhem. Raw goes off the air with fistacuffs flying and the crowd going mad.

As fans, we tend to enter these go home shows with high expectations. I’ve seen better, but I thought this episode of Monday Night Raw was a considerable upgrade over what we’ve been fed over the past couple of weeks. It started strong minus the opening promo, ended with a bang, and kept a good pace throughout. While you probably still don’t give a combined hoot about Batista and ADR, I think that most of us are even more pumped for the Shield vs. the Wyatts, and the chamber match.

The launch of the WWE Network is less than a week away. Did Monday Night Raw convince you to purchase what could be your last WWE pay per view in the Elimination Chamber?