The second Monday Night Raw of February, 2014 came to us live from Los Angeles, California. As promised last week, we were treated to a special guest host in the unforgettable Betty White, who opened things up on stage in the company of the Big Show. During the show, one fan tweeted suggesting that maybe #bettywhite should be the new face of the WWE. That’s the best idea I’ve heard yet this year!

She received a great reaction from the L.A. crowd, but sadly, Betty’s bit was pretty short and the show went straight into the Triple H and Stephanie chat hour. The corporate power couple began an elaborate run around about some snore worthy this and that over Daniel Bryan’s main event win last week. For once, Orton did us all a favor and cut them off. Unfortunately, Orton’s spiel was even more theatric and lengthy… Did I mention lengthy? Made lengthier OF COURSE because Bryan also jumped in to run his chops.

Anybody who hadn’t changed the channel by then eventually got to see some actual wrestling in a six-man tag team match pitting Rey Mysterio, Cody Rhodes, and Goldust against The Wyatt Family. To no surprise, this match delivered quick and efficient action. It was also no shocker to see the Wyatt’s take the win when Bray impressively countered Rey’s 619 with a vicious Sister Abigail. After the match, he cut another cryptic promo spewing venom on the Shield, their opponents for the upcoming Elimination Chamber pay per view.

In a rather odd pairing, Sheamus and Christian faced off against The Real Americans. Solid match here, IMO, as both teams brought a slobber knocker mentality to the ring. Following some great back and forth, Christian played the setup man, taking out Cesaro right after positioning Swagger for a brutal Brogue kick, which sealed the deal. I was expecting to see a little more turmoil between TRAs, who look poised for a breakup, but I guess Swagger dropping another fall is enough fuel to move this sluggish-paced storyline forward.

One of the more thrilling segments of the evening was the return of Mark Henry, who resurfaced after suffering a dislocated elbow he received in the scuffle against Brock Lesnar back in January. Despite being on the shelf for a few weeks, Henry was thrust right into a title match against Shield member Dean Ambrose – more proof of what a joke the U.S. title has become. This was no technical masterpiece by any means, but Henry did look rather dominant. Looked like he might actually win it after a World’s Strongest Slam, but the Shield broke it up, simultaneously giving Henry a DQ win and a beatdown before being scared off by the Wyatts.

I have to admit I was pretty excited when Raw’s main event finally rolled around as it continued one of the best feuds in the modern WWE era: John Cena vs. Randy Orton. Cena was dominant in the outset, forcing Orton to rethink his game plan out on the floor a couple of times. It didn’t take long, however, for the champ to the turn the tide as he delivered a succession of beatdowns both in the ring and out on the floor. Orton’s backdrop to Cena on the barrier was flat out barbarous, earning him both heat and applause from the crowd. 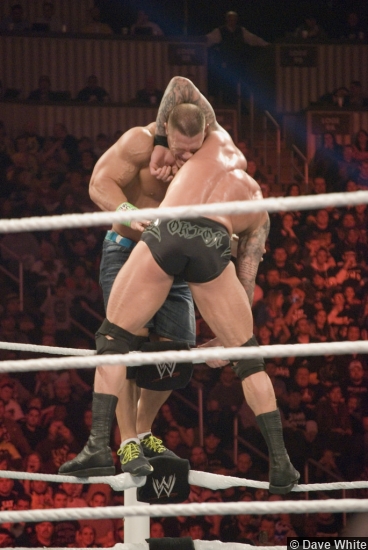 Things got really intense as Cena and Orton began to alternate control with some nice back and forth action. Orton slipped out of an AA attempt to respond with a crushing back breaker. Cena countered Orton’s patented hanging DDT by backdropping him out to the floor. Cena goes for his finisher again, only to have the slippery Orton escape and deliver a snappy power slam for yet another two-count. It was a lot of this stuff until Cena was able to hit a dangerous looking leg drop from the top and an Attitude Adjustment to secure a clean victory over the WWE World Champion.

What did I miss? Santino Marella vs. Fandango. The debut of new backstage interviewer Byron Saxton (as if we need less Renee Young). The continued burial of former two-time World Heavyweight Champion Dolph Ziggler, who got squashed by a rapidly declining Alberto Del Rio. Outside of the main event, this episode of Monday Night Raw was nothing too special. I think many fans will agree that WWE needs to pick up the pace as we tread further down this road to Wrestlemania 30. Guess the real silver lining here is that the Orton-Cena rivalry finally appears to be done and for once, Daniel Bryan didn’t get physically shafted by the Authority. Until next week!