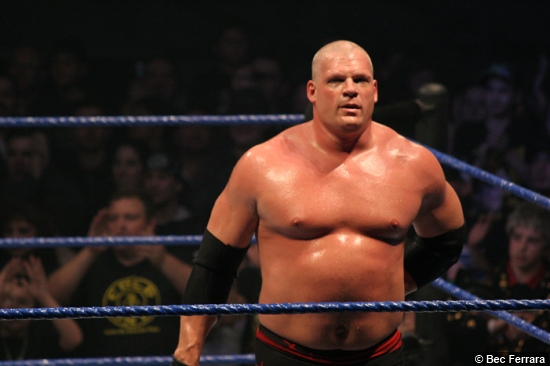 Nine nights before the Royal Rumble, the 752nd edition of WWE Friday Night SmackDown came to you from the DCU Center in Worcester, MA. After turning on CM Punk on RAW, leaving “The Best in the World” at the mercy of The Shield, the legendary New Age Outlaws would get a shot at reliving their former glory as Road Dogg & Billy Gunn face WWE Tag Team Champions Goldust & Cody Rhodes in a non-title match!

After abandoning CM Punk in their 6-Man Tag match against The Shield on RAW, SmackDown kicks off with the legendary five-time former WWE Tag Team Champions The New Age Outlaws as Road Dogg & Billy Gunn would face WWE Tag Team Champions Goldust & Cody Rhodes in a non-title match. In the middle of the match, Goldust & Cody Rhodes had things well in hand when SmackDown General Manager Vickie Guerrero conveniently makes an appearance, talking about the upcoming Royal Rumble Match, distracting Cody Rhodes long enough for Billy Gunn to catch Rhodes with a roll-up, hooking the tights for good measure to get the three-count and the win for The New Age Outlaws.

Nine nights before his client, Brock Lesnar, faces Big Show at the Royal Rumble, Paul Heyman makes an appearance on SmackDown, saying that Lesnar is the victim of a “conspiracy theory”. Heyman continues, saying that Big Show gave the “misleading impression” that he is more dominant than Brock Lesnar, vowing that Brock will “conquer” Big Show at the Royal Rumble. Heyman then says that he has been through many “wars”, but he has always had Lesnar by his side and that is why Big Show will never try to do to him what Big Show did to Zeb Colter on RAW. However, Heyman is soon interrupted by “The World’s Largest Athlete” Big Show, who makes his way towards the ring, charging at Heyman, who is quick to hop out of the ring and make a hasty retreat. Big Show tells Heyman that both Heyman and Brock Lesnar should “run in fear”, saying that he knows that Heyman is lying. Big Show then says that he has a message for Heyman to deliver to Lesnar, vowing that he will knock Lesnar out at the Royal Rumble!

In Divas action, Naomi, with Cameron in her corner, would go one-on-one with Tamina Snuka, with Divas Champion AJ Lee in her corner. In the end, it was Naomi hitting a split-legged moonsault on Tamina Snuka, pinning Tamina for the win.

For the first time since Daniel Bryan abruptly and physically left The Wyatt Family by attacking its patriarch, Bray Wyatt, The Wyatt Family would appear on SmackDown. Bray Wyatt says that, when he was a child, he wanted nothing more than to be powerful like his father, but he was never there for him. Bray continues, saying his father “betrayed” him, but he always knew that he was “destined for greatness”. Bray then says that “Sister Abigail” saved him and he became obsessed with her “power” and she told him that he would be “deceived” again. Bray continues, saying that he had to “sacrifice” himself so that he could be “resurrected” into the creature that he was born to be. Bray then says that Daniel Bryan stabbing him in the back was a “foolish attempt”, saying that Bryan was given every chance to walk with the “reapers”, but now he will “burn with the saints”.

As both men prepare to join 28 other Superstars in the 30-Man Royal Rumble Match, Intercontinental Champion Big E. Langston would go one-on-one with Fandango, with Summer Rae in his corner, in a non-title match. In the end, it was Big E. Langston hitting the Big Ending on Fandango, picking up the win.

Following their Steel Cage match victory over Bray Wyatt & Daniel Bryan on RAW, Jimmy & Jey Uso were all bandaged up as The Usos faced The Real Americans, with a wheelchair-bound Zeb Colter in their corner, on SmackDown. During the match, the action would spill to the outside where Zeb Colter would volunteer himself to help Antonio Cesaro get a shot in on Jimmy Uso, but Jimmy would get his payback as Jimmy would use the wheelchair-bound Colter, crashing Zeb into Cesaro! Shortly after this, Jimmy Uso would hit the Superfly Splash on Jack Swagger, pinning Swagger to pick up the win for The Usos.

After being defeated by The Shield, thanks in part to The New Age Outlaws’ betrayal, on RAW, “The Best in the World” CM Punk would appear on SmackDown with the insane intention of not only calling out all three members of The Shield, but The New Age Outlaws, as well! Punk says that, unlike The Authority, he is not a “coward” as he does not need an “army” to fight his battles. Punk then says that he is not an idiot, even though he is about to call out five guys before saying that it does not matter what he does, The Authority is going to do whatever they can to try and shut him up. Punk continues, saying that, when he talks, people listen, and that is “real power”. Punk then gets to the heart of the matter, saying that Triple H “lucked” his way into a position of power and he uses said power to satisfy his “ego” and his “personal agenda”.

Before Punk can continue discussing his issues with the COO, he is interrupted by The Shield as United States Champion Dean Ambrose, Seth Rollins, & Roman reigns surround the ring before The New Age Outlaws, Road Dogg & Billy Gunn make their entrance as well. With Punk alone in the ring armed only with a microphone, The Shield and The New Age Outlaws get on the ring apron, ready to decimate Punk. However, the Director of Operations, Kane, storms out, ordering the five men to “stand down”. The Shield and The New Age Outlaws comply as Kane enters the ring, telling Punk that his anger is “misplaced”. The Director of Operations says that The Authority is not against Punk, claiming that Triple H & Stephanie McMahon want Punk to main event WrestleMania, which is why they granted Punk entry into the 30-Man Royal Rumble Match. Kane then says that he has been informed that his “top directive” is to ensure that Punk is treated “justly” and with the “respect” that he deserves! Kane then says that Punk has his “word” as the Director of Operations. Kane then exits the ring, but Punk is not done with “The Big Corporate Machine”, saying that Kane’s word used to mean something before Kane was a “seven-foot tall, sell-out suck-up”. This insult fires up the Director of Operations as Kane instructs The Shield and The New Age Outlaws to attack Punk, but as soon as Punk turns his back, Kane slides into the ring, planting Punk in the center of the ring with a chokeslam! Kane then stands over Punk, adjusting his tie as he looks down at his handiwork.