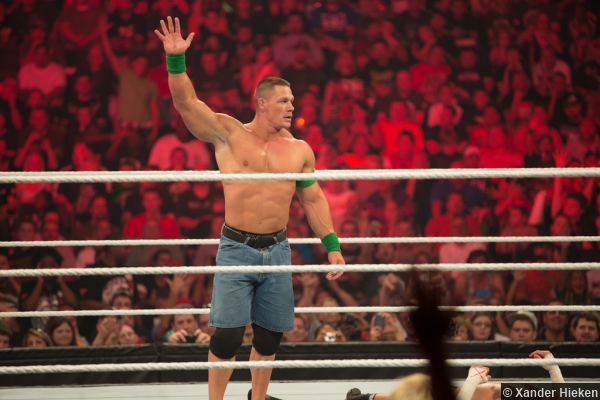 The 749th edition of WWE Friday Night SmackDown was the final SmackDown of 2013 and it came to you from the American Bank Center in Corpus Christi, TX. One of the most successful Superstars of 2013 has to be John Cena, who started off the year by winning the 2013 Royal Rumble Match, which would lead to Cena defeating The Rock for the WWE Championship on the grand stage of WrestleMania. Add to that an early return from injury to win the World Heavyweight Title and Cena has had one of the best years of his career, but now at the close of 2013, Cena will kick off the show on SmackDown to reflect on the past year and what he has in store for 2014!

On the final SmackDown of 2013, the show kicks off with John Cena, who says that the crowd in Corpus Christi is going to help WWE ring in the New Year. Cena says that, once the year begins, all the fun is over because everyone will be focused on their New Year’s Resolutions and his resolutions are to finally draft his XFL fantasy football team and do a rap album with The Great Khali, but more than that, he wants to gain the WWE World Heavyweight Championship! Cena then calls Randy Orton out for his rematch, but Cena instead gets The Shield as Dean Ambrose, Seth Rollins, & Roman Reigns surround the ring. Cena refuses to back down and The Shield immediately put the boots to Cena, but Cena is then saved by a former adversary in Mark Henry, who briefly takes it to The Shield before the numbers overwhelm “The World’s Strongest Man”. However, once Big E. Langston joins the fray, Cena, Henry, & Langston take it to the trio, sending The Shield out of the ring. WWE’s Director of Operations Kane then comes out to announce three big singles matches as Big E. Langston will face Dean Ambrose, Mark Henry will face Roman Reigns, and John Cena will face Seth Rollins!

The opening match of the night featured The Wyatt Family as The Wyatt Family’s Luke Harper & Erick Rowan, with Bray Wyatt in their corner, would face The Usos in tag team action. The towering hill folk would make quick work of The Usos as Luke Harper puts Jimmy Uso down with a big clothesline before Erick Rowan squashes Jimmy with a big splash, pinning Jimmy for the win. After the match, Bray Wyatt would enter the ring, taking Jey Uso and planting him with the Sister Abigail.

Backstage, Renee Young is interviewing WWE World Heavyweight Champion Randy Orton about his plans for 2014 and the ever confident champion ponders the possibility of entering the 2014 Royal Rumble Match, winning it, then taking the night off to watch WrestleMania XXX. Orton then says that he would “retire” as champion the next night then induct himself into the WWE Hall of Fame. However, Dolph Ziggler takes issue with this as “The Show-Off” crashes Orton’s interview, calling the champion “spineless” and saying that he is going to be the guy to shut Orton up. The champion says that it sounds like Ziggler wants an RKO before Kane breaks up the face-off as the Director of Operations books Randy Orton to face Dolph Ziggler on SmackDown. After Dolph exits, Kane encourages Orton to do some mass destruction in the ring tonight.

After Goldust defeated Jack Swagger on Main Event, the WWE Tag Team Champions would be looking to keep their momentum going as one-half of the WWE Tag Team Champions, Cody Rhodes, with Goldust in his corner, would go one-on-one with The Real Americans’ Antonio Cesaro, with Jack Swagger & Zeb Colter in his corner. During the match, Jack Swagger would get on the ring apron, distracting Cody Rhodes long enough for Antonio Cesaro to catch Rhodes with a roll-up, keeping Rhodes down for the win.

Following a backstage confrontation earlier in the evening, SmackDown would see WWE World Heavyweight Champion Randy Orton going one-on-one with “The Show-Off” Dolph Ziggler in a non-title match. In the end, it was Randy Orton using a thumb to the eye followed by the RKO to put Dolph Ziggler down for the three-count as the WWE World Heavyweight Champion picks up the win. After the match, Randy Orton would set his sights on destroying “The Show-Off”, tossing Dolph Ziggler out of the ring. Orton would then toss Ziggler into the steel steps before shoving Dolph face-first into the steel ring post and tossing Ziggler over the ringside barricade. The champion then positions Dolph on top of the ringside barricade before drilling Ziggler with the suspended DDT on the arena floor!

In the first of three one-on-one matches featuring The Shield, Intercontinental Champion Big E. Langston, with John Cena and Mark Henry in his corner, would go one-on-one with United States Champion Dean Ambrose, with Seth Rollins & Roman Reigns in his corner. In the end, it was the Intercontinental Champion reigning supreme, putting Dean Ambrose down with the Big Ending, pinning Ambrose for the win.

After Dean Ambrose lost his match against Big E. Langston, Roman Reigns, with Dean Ambrose and Seth Rollins in his corner, would face “The World’s Strongest Man” Mark Henry, with John Cena and Big E. Langston in his corner. Despite being at a size disadvantage, Roman Reigns would not back down in the slightest, hitting Mark Henry with the Superman Punch, following it up with the Spear to secure the victory over “The World’s Strongest Man”.