It’s getting colder and darker outside, and our friends across the pond are about to give thanks for (from what I can make out) being able to crush each other in manic sale stampedes. That must mean it Survivor Series time! What better way to stave off Jack Frost than to stay at home, wrap up on the sofa and watch…a multi Diva match based around Total Divas? Really? FFFFFUUUUUUUUUUUU~ 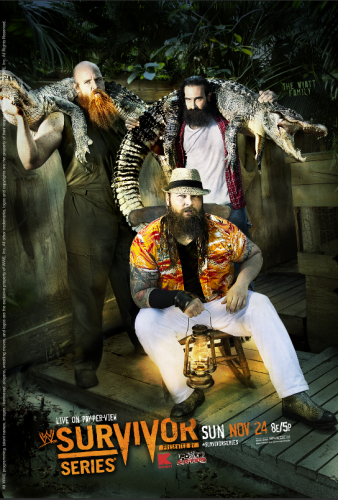 Hey. I’ve got tickets for WrestleMania 30. That has no bearing on this show whatsoever, but I had to mention it. I’m going to New Orleans. I am finally going to get to meet a good chunk of the folks from the TWO forums. I am excited greatly about this. Okay, now that’s out my system let’s get on with these predictions.

Kick Off Match
Kofi Kingston vs. The Miz

Can we call this one a preshow again since it has The Miz on it? Oh Miz. Hey, remember last year when around this time they made Miz a little interesting by giving him the reluctant face turn as part of Team Foley, and I thought it’d be great if they pushed him all the way at the event itself and made him the MVP for his team…and then they didn’t? Yeah, that’s been Miz’s 12 months all over. He was uninteresting as a heel and unlikeable as a face, so I really don’t know what WWE are planning on doing with him from here on out?

I dunno, after having some fantastic kick-off shows this year, just going back to Miz vs. Kofi for the bajillionth time seems a bit…flat. Like, a waste of what was becoming a great spot on the card to be in.

I’ve no doubt the match will be competent enough, and I always enjoy watching Kofi do counters of reversals of reversals of counters, but I can’t seem to get any real enthusiasm for this preshow match. I bet they have Josh Matthews present it instead of the far superior Renee Young too. Pfft.

Who I think will win: I don’t really know/care. I’d imagine Miz if they’re planning on getting behind this heel turn, but then that probably just means that unless Big E does really well they’ll just end up putting the IC title on Miz. Again. Ain’t no way he’s climbing back up to main event status any time soon.

Awwww…but I don’t want to write about Total Divas. I’ve still managed to avoid pretty much everything other than the clips they show you on Raw (and I fast forward pretty much all of those if I’m honest) so I don’t even know why this match has come about?

I mean really, look at that line-up. Aksana. Yeesh. And Rosa Mendes? Where has she even been, and what is with that terrible blonde dye job (God, I sound like such a bitch)? And the little of seen of Eva Marie has been enough to convince me that she is just straight up terrible. Like, TERRIBLE.

Small mercies though, at least it doesn’t look like this is an elimination match…what’s that? It is? Oh God, after Musical Chairs, kill me now!

Who I want to win: AJ, as she’s the only one in this match who hasn’t annoyed the holy hell out of me recently.

Who I think will win: NOBODY. Only kidding, probably the Total Divas team for some reason, but I don’t really care.

HAHAHAHAHAHA!! F*CK YOU CURTIS AXEL!! Finally we have the IC strap back on someone who may possibly do something of some use with it, instead of just allowing it to be sucked into the charisma vacuum that is McGillicutty. Well, Axel, but whatevs. Either name, he sucks. Not even his entrance music can save him at this point in my eyes. Just…I want him gone. Now.

Which is where Big E Langston comes in. I went to one of the WWE lives events a fortnight ago, and I was genuinely surprised at the reception for Big E considering he’d only made the switch to face about 2 weeks prior to that. I can’t quite put my finger on it, but there’s something about Big E that just screams that he has it. Personally I’d love to see them give him more promo time, the guy has a voice like chocolate silk being poured into your ear, and he’s got a natural aptitude for comic timing. And eating quality kielbasa.

So what do I predict to happen in this match? Big E to destroy Axel to cement him in as IC champion. In an ideal world they’d start to run with Big E’s NXT “5” gimmick from tonight. Have him beat Axel convincingly, say it’s not enough, give him another Big Ending and make the referee count the 5. I’d like to think that would instantly get over with the crowd. Especially if you have him do again to somebody else in a title defence tomorrow night on Raw.

Push Big E Langston, WWE, and don’t do your usual thing of giving him the stop start push. I think he’s totally gonna be worth it in the long run.

Who I want to win: Big E. With a FIVE count.

Who I think will win: Big E. In impressive fashion. And hopefully with a FIVE count.

YES!! We got a traditional Survivor Series match!! Not only that, but as the listeners of the TWO Podcast (both of them) will also know, Dean now owes Matt 20 English Pounds (none of those Scottish “pounds” thank you very much) since Rey Mysterio has returned.

Ridiculously bad bets aside, this right here could well be the match of the night. Look at that line-up, the 4 in form teams of WWE (and Rey Mysterio) all together in an elimination match. Tell me how this could possibly be a bad match? Go on, just try. And saying the Shield do the same thing every time is not a valid answer Jay! 😛

Seriously though, this should be a corker of a match. The Usos have been fantastic recently, as have The Real Americans. Swagger works really well in this team with Cesaro, and I will never tire of watching big fatty fat fats getting swung by their ankles. Cody has been great (but then I always thought he was) and Goldust has found some kind of resurgence as of late. I know I keep saying it, but just look at the shape he’s got himself back into compared to his stint as Black Reign in TNA. It doesn’t look like the same guy! And The Shield? Well they’re just their usual awesome selves. Although I’m not liking the teasing of this potential split. I’d much rather The Shield become one of those groups like DX, where the members are good to go off and have singles matches and runs, but when the situation warrants it The Shield reunite and all hell breaks loose. Don’t just split them for the sake of it. Please.

Who I want to win: I honestly don’t know. They’re all great (and Rey Mysterio).

Who I think will win: Potential miscommunication between The Shield could lead to more tension and the good guys picking up the win. As sad as that makes me feel.

I’m not entirely sure what to think of this. Don’t get me wrong, I love everyone involved in this match, I just don’t see where this is headed? Are we supposed to be asking who the “Devil” is that made Bray Wyatt take down Punk and Bryan? Is that the point of this? Maybe I’m missing something obvious, but I’m not seeing what this is doing other than killing time for Punk and Bryan until creative can slot them back in somewhere?

Surely the Wyatts should be getting built up hugely at the moment? They should be running through the lower card like a hot knife through butter, but instead they find themselves up against two guys who should themselves be protected in preparation for them to (potentially) lead the fight back against The Authority? So you’ve got a team who should be being pushed as monsters against guys who really shouldn’t be being beaten just yet. Unless the reveal Bray and the Family to be part of The Authority’s little unit. Which would frankly suck.

So still, I’m unsure of what to make of it. No doubt all 4 men are capable of having a great match, but it’s probably a match that means nothing in the long run, which is waste of everyone involved.

I seem down on this, but I’m not really. I’m still looking forward to the Daniel Bryan hot tag (or hot tag cut off), and I always enjoy seeing Punk do his thing. I love, love, LOVE Luke Harper’s epic clothesline finisher, and Rowan is doing some good work just being a beast waiting in the background. I Just feel like all involved could be doing more instead of treading water. Maybe I’m impatient, maybe something will be revealed during this match that ties everything together and gives it some direction? I guess we’ll just have to wait and see.

Who I want to win: Wyatts, I think. They stand to gain more from a win than Punk and Bryan would here. I think?

Anyone ready for 20 minutes of Del Rio working the arm until Superman Cena puts in an appearance? Nah, me neither. And it’s not even the Superman Cena routine that’s the problem this time.

Alberto Del Rio. Good grief. I…I just despair. Do you even need to read me going on about how boring he is any more? No? Good, because I’m tired of repeating myself.

Cena’s gonna win. No point in thinking or wanting, just Cena wins. I know you can’t see it right now, but I was just doing that thing where you pinch the bridge of your nose in despair and sigh deeply. For 5 minutes.

Wow. That’s not a lot of words, but I really have nothing else to say. Moving swiftly on…

Remember that WWE House Show I mentioned earlier? Well what happened there is pretty much how I feel about this match. They announced that Randy Orton would be defending the title and instantly the YES!! chants started up from the crowd…only for Big Show to make his entrance to a kind of…stunned silence. The crowd didn’t want Big Show, they wanted Daniel Bryan. Now fair enough Daniel Bryan was in Munich (as was Punk. Gutted.) but that didn’t change the fact that he was very much who the crowd were behind when it come to their number one babyface right now.

And again, I know very well that they can’t string out Orton and Bryan forever, I know more people have to step in as contenders, and I know (think) that this is just WWE cooling Bryan off a little to build him back up by winning the Rumble and heading on to Mania (where I’ll be, dunno if I mentioned that?), and that may well be my problem with it. Big Show is just here as a placeholder really. He’s not taking the title from Orton, they just need a body in there to keep Randy busy.

Who I want to win: Randy. You keep that title nice and warm for Bryan at Mania, buddy.

Who I think will win: Randy. Big Show isn’t taking the title, we’re just in the mid-storyline lull and he’s filling a gap. A big gap.

So there you go. A mixed bag if I ever saw one, but we get a traditional match of elimination awesomeness (for those who don’t know, I’m not talking about the Divas) that’s also got a Shield multi-man match mixed in there so we should be okay. I think we’ll be okay anyways? Let me know what you think in the comments, or over on the TWO Forums, and I’ll see you next time!