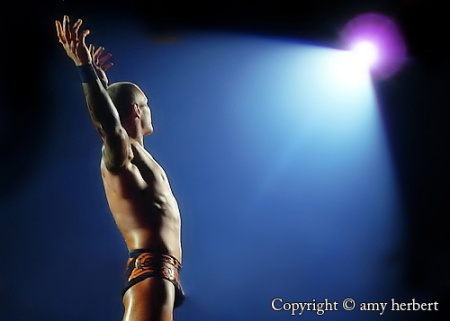 Five nights after SummerSlam, the 731st edition of WWE Friday Night SmackDown came to you from the Rabobank Arena in Bakersfield, CA. Following his surreal alliance with The McMahon Family via his controversial WWE Title win at SummerSlam, as well as assisting in a beat down of Daniel Bryan on RAW, SmackDown would open with the brand new WWE Champion, the “corporate champion” Randy Orton! Also, after Christian fell to the cross armbreaker of Alberto Del Rio at SummerSlam, narrowly missing out on a third World Heavyweight Title reign, “Captain Charisma” would get another chance to prove that he deserves “one more match” for the title as Christian goes one-on-one with World Heavyweight Champion Alberto Del Rio in a non-title rematch from SummerSlam.

SmackDown kicks off with SmackDown General Manager Vickie Guerrero in the ring, who gladly introduces the new WWE Champion Randy Orton, shaking the new champion’s hand on his way to the ring, leaving “The Corporate Champion” to address his controversial title win at SummerSlam. Orton says that, as their WWE Champion, he vows to give them what they “want” and what they “deserve”, saying that he is their “role model”. The new champion continues, saying that he warned all of them that, when he cashed in his Money-in-the-Bank contract, nobody would see it coming. Orton then claims that, at SummerSlam, he had no idea that Triple H was going to put Daniel Bryan down with the Pedigree, but he saw his opportunity to cash in and he took it. Orton then says that he did not need Triple H’s help to win the WWE Title nor did he need the assistance of The Shield on RAW and, while he greatly appreciates the “support” of The McMahon Family, he would greatly appreciate the support of the fans, as well. Orton continues, saying that, not only is he the WWE Champion, but he is the “face of the WWE”.

The new WWE Champion is then interrupted by the man who was screwed out of the WWE Title by Triple H at SummerSlam, Daniel Bryan, who makes his way to the ring to address the new champion. Before speaking to the new champion, Daniel Bryan thanks John Cena for allowing him to wrestle Cena at SummerSlam. Bryan then turns his attention to Randy Orton, saying that, as far as Orton being the “face of the WWE” goes, it is time for that face to “change”. Bryan continues, saying that he looks nothing like Randy Orton, saying the champion is chiseled, tall, and so “pretty”, saying that he can see why Triple H likes Orton so much because the new champion is “so pretty”. Bryan then calls Orton “arrogant”, saying that the third-generation star has been handed everything in the WWE because his father and grandfather have given Orton the “genetic golden ticket” to succeed in the WWE before going back to calling Orton “pretty”. Bryan then says that Orton is so “pretty”, it makes him want to kick Orton in the face, saying that he had to “scratch and claw” his way to the top, saying that he is not tall and he is certainly not pretty. Bryan continues, saying that he can wrestle and he knows that he can beat Orton with the WWE Title on the line and saying that he is entitled to a rematch for the WWE Title and he wants that rematch tonight! Orton then calls Bryan “short stuff”, telling Bryan that he will have to wait until Night of Champions before Orton tries to catch Bryan off-guard with the RKO, but Bryan counters, kicking Orton in the face and sending him out of the ring!

Backstage, Wade Barrett confronts SmackDown General Manager Vickie Guerrero, demanding a rematch with Daniel Bryan, vowing to get rid of Daniel Bryan once and for all. The GM agrees, stating that Daniel Bryan will face Wade Barrett in a Steel Cage Match later tonight!

After two straight wins over “Mr. Money-in-the-Bank” Damien Sandow at SummerSlam and on RAW, the opening match of the night would see Cody Rhodes going one-on-one with Intercontinental Champion Curtis Axel, with Paul Heyman in his corner, in a non-title match. In the end, it was a distraction by Paul Heyman that would provide the opening for Curtis Axel to hit the Axel Cutter on Cody Rhodes en route to picking up the win. After the match, Paul Heyman says that he is in “agony” and CM Punk is the reason for it, saying that he is in “emotional distress” because a man that he guided to being the best in the world has become nothing more than a “loser”. Heyman continues, saying that Punk was pinned by Brock Lesnar at SummerSlam, but instead of accepting the loss, CM Punk turned into a “madman” on RAW, saying that, without him, Punk “never stood a chance” against Lesnar. Heyman then says that, without him, Punk is “lost” while Curtis Axel continues to win, claiming that no one can defeat Axel for the Intercontinental Title. Curtis Axel then speaks, saying that CM Punk is so “jealous” of the attention that Heyman has been giving him that Punk assaulted him on RAW. Axel then vows to finish the job that Brock Lesnar started at SummerSlam, challenging Punk to face him one-on-one this Monday night on RAW!

Five nights after successfully retaining the World Heavyweight Title against Christian at SummerSlam, World Heavyweight Champion Alberto Del Rio would again face “Captain Charisma” Christian, this time in a non-title match on SmackDown. In the end, Christian would do his best to fight out of the cross armbreaker of Alberto Del Rio, but, much like at SummerSlam, Christian would succumb to the painful submission hold, tapping out as Del Rio picks up the win. After the match, Del Rio says that he knows that all of the Latinos out there want to be the next Alberto Del Rio, but they cannot be like him because they are “peasants”. Del Rio continues, saying that they do not have to be “peasants” and they can avoid this by following him to greatness. This brings out Del Rio’s former ring announcer, Ricardo Rodriguez, who brings out the man he now represents, saying that this is a man who exudes excellence and who never looks down on people, bringing out “The Whole Damn Show” Rob Van Dam! With Alberto Del Rio’s focus on RVD, Christian would come off of the top rope, taking the champion down with a missile dropkick. This allows RVD to enter the ring and hit Del Rio with the Rolling Thunder!

After making it known that they intend to take the WWE Tag Team Titles from The Shield’s Seth Rollins & Roman Reigns, the gargantuan team of “The World’s Largest Athlete” Big Show and “The World’s Strongest Man” Mark Henry would face all three members of 3MB, Heath Slater, Jinder Mahal, & Drew McIntyre, in a 3-on-2 Handicap Match. Big Show & Mark Henry would dominate the trio, ending with Big Show blasting Drew McIntyre with the Knockout Punch en route to picking up the win for himself and Mark Henry. After the match, WWE Tag Team Champions Seth Rollins & Roman Reigns appear on the Tron, scoffing at Big Show & Mark Henry’s victory over 3MB before Seth Rollins says that he is “shocked” that Big Show got up from the beating he took on RAW, saying that Big Show’s time is coming to an end. Roman Reigns then scoffs at Mark Henry, saying that The Shield will “never” respect Mark Henry. Rollins then says that they are simply “better” than Big Show & Mark Henry, telling the giant duo to “believe in The Shield.”

Then it was time for the main event as, after interrupting WWE Champion Randy Orton earlier in the night, SmackDown General Manager Vickie Guerrero would place Daniel Bryan in a match against Wade Barrett inside the unforgiving Steel Cage, where the only way to win is by pinfall, submission, or escaping the cage, either over the top of the cage or through the door, with both feet touching the floor! In the end, Daniel Bryan would use the move that won him the WWE Title at SummerSlam, charging at Wade Barrett, connecting with a knee to the face, pinning Barrett to pick up the win inside the steel. After the match, Daniel Bryan would celebrate his win on the outside, but Randy Orton would slip out from under the ring as the WWE Champion drops Daniel Bryan with the RKO on the arena floor!