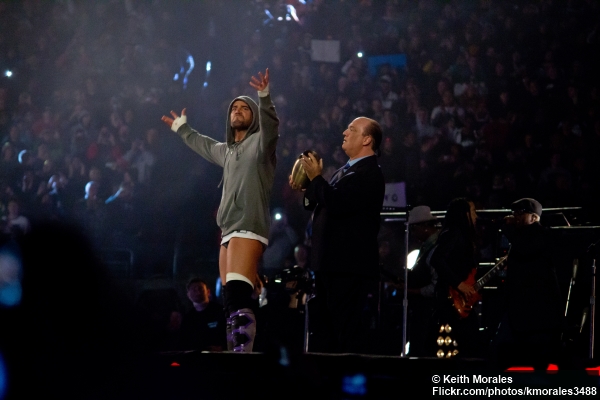 Best Bond in the World?

As promised, SmackDown would kick off with a special appearance by former WWE Champion CM Punk, who says that, if he were John Cena, he would be giving a speech on how America was founded on “hustle, loyalty, and respect”. Punk continues, saying that, thankfully for them, he is not Cena before saying that, to him, Independence Day is about a group of smart, like-minded men who were set on blazing their own trail and making their own rules, saying that is a concept he can get behind because “independence” is very important to him. Punk then says that, if someone tells him to do something, he goes in the opposite direction and that is what he did when people said that Paul Heyman would be good for him at ringside. Punk continues, saying that people questioned his chances of winning Money-in-the-Bank All-Stars, he decided to prove him wrong. Punk then says that he has “two simple goals” in mind right now, one of them is Brock Lesnar and the other is winning Money-in-the-Bank All-Stars and ultimately becoming the WWE Champion again.

Backstage, Paul Heyman confronts his “best friend”, CM Punk, saying that Punk has nothing to gain from facing Alberto Del Rio, but Punk says that he is a competitor. Heyman then tries to petition his way back to Punk’s side for Money-in-the-Bank All-Stars, but Punk pleads with Heyman to “stay out of it”.

Nine nights before they are two of the seven competitors in the World Heavyweight Championship Contract Money-in-the-Bank Ladder Match, Team Rhodes Scholars, Cody Rhodes & Damien Sandow, would face the #1 Contenders for the WWE Tag Team Titles, Jimmy & Jey Uso. In the end, it was Jimmy & Jey Uso coming off of the top rope with a double Superfly Splash on Damien Sandow en route to Jimmy Uso pinning Sandow to pick up the win for Jimmy & Jey Uso. After the match, The Shield appears on the Tron as Seth Rollins says that they are “more focused” than they have ever been, saying that the Usos are not so “lucky” after all. Roman Reigns then says that the Usos better bring a lot more than luck come Money-in-the-Bank. Dean Ambrose then states that The Shield is what “dominance” looks like in 2013, saying that everyone should get used to him lurking in the shadows, holding the Money-in-the-Bank briefcase and they should all “believe in The Shield”.

Before she challenges AJ Lee for the Divas Title at Money-in-the-Bank, Kaitlyn, with Layla in her corner, would go one-on-one with Alicia Fox on SmackDown. As has become a regular occurrence, Divas Champion AJ Lee would get involved in one of Kaitlyn’s matches as AJ skips around ringside during the match and, while Kaitlyn does a good job of ignoring the Divas Champion, when AJ gets on the ring apron, Kaitlyn knocks AJ to the floor. However, the distraction allows Alicia Fox to surprise Kaitlyn with a roll-up for the win.

Backstage, Divas Champion AJ Lee blows off The Bella Twins, who try to let AJ Lee know that they have their sights set on her Divas Title. AJ then confronts Big E. Langston, rushing Langston and convincing Langston to leave Dolph Ziggler behind so they can escape the arena before Kaitlyn catches up with her.

An intense rivalry would be renewed on SmackDown as, nine nights before they take part in Money-in-the-Bank All-Stars, “Captain Charisma” Christian would go one-on-one with “The Viper” Randy Orton. At the end of a back-and-forth match between the two former World Champions, Christian would counter the RKO, but when Christian tries to come off of the top rope, Randy Orton would move out of the way, planting Christian with the RKO en route to picking up the win.

Backstage, SmackDown Senior Advisor Theodore Long tells Paul Heyman that he wants Heyman to join Michael Cole and JBL on commentary for the main event match between CM Punk and Alberto Del Rio. Heyman has issue with that, saying that Punk does not want him to get involved, but Long says that Heyman will simply be out there to commentate.

Dolph Ziggler was also in action on SmackDown as “The Show-Off” would go one-on-one with Drew McIntyre, with Heath Slater & Jinder Mahal in his corner. In the end, it was Dolph Ziggler hitting Drew McIntyre with the Zig Zag en route to picking up the win. After the match, Heath Slater & Jinder Mahal would enter the ring in another attempt to attack Dolph Ziggler, but “The Show-Off” twice escapes 3MB, taunting the trio with his quickness.

Nine nights before he is part of the Money-in-the-Bank Ladder Match for a future World Heavyweight Title match, “The Dancing Enigma” Fandango, with Summer Rae in his corner, would go one-on-one with Justin Gabriel. In the end, it was Fandango coming off of the top rope with a leg drop en route to picking up the win.

Then it was time for the main event as, with Paul Heyman a guest on commentary per the orders of Theodore Long, “The Best in the World” CM Punk would go one-on-one with World Heavyweight Champion Alberto Del Rio in a non-title match. During the match, Alberto Del Rio would work CM Punk over on the outside of the ring, even tossing Punk onto the announce table. The World Heavyweight Champion then takes apart the announce table, which brings Paul Heyman out of his seat as Heyman takes issue with Del Rio’s assault on his “best friend”. However, Del Rio drops Heyman with a right hand on the outside and this sends CM Punk into a frenzy as Punk leaps off of the announce table onto the World Heavyweight Champion, pummeling Del Rio all over the ringside area. While Punk dismantles Del Rio, the referee reaches his ten-count and the match is ruled a double count-out. CM Punk pays little mind to the decision, however, as he rolls Del Rio back into the ring where he drops the World Heavyweight Champion with the GTS! After the attack, CM Punk helps Paul Heyman to his feet and the two best friends leave the ringside area together.