The 3 Count: My Life In Stripes As A WWE Referee Book Review

Jimmy Korderas is amongst the most recogniseble men to have been a WWE referee, his career spanning such a long time and taking in so many matches including officiating the main event of Wrestlemania 24 between Edge and The Undertaker. ‘The Three County- My Life in Stripes as a WWE referee’ is Korderas’ tale; one that takes him from being a massive wrestling fan in Ontario, Canada to the bright lights of the WWE via a couple of laps around the world. Here he talks of the wrestlers he met and the things he experienced. 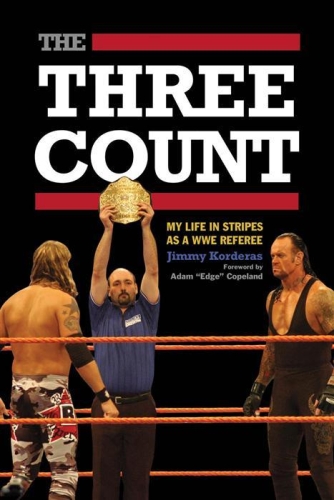 Very early on in the book it becomes clear that Korderas is a humble and content guy who having been able to do his dream job (working for the WWE) for two decades, looks back on his time with the company full of gratitude and fondness. As such, this is a ‘happy’ story, where Korderas talks of the people he met and worked with during his time with the WWE.

In some respects this makes a nice change to the standard wrestling biography genre, Korderas has no scores to settle or an appetite to publicly air his grievances. About half way through however, Korderas’ constant marking out gets a little tired, as he gushes at the ‘kindness’ of wrestler after wrestler (for amongst other things, listening to him, talking to him, not ignoring him) and you end up yearning for him to stand up for himself. In particular, the episode near the end when his release from the company is relayed to him by John Laurinitus over the phone, is a moment where Korderas would have been more than justified in feeling let down by a company he had given 20 years of his life to, but no such feelings are conveyed.

There is another important stretch of Korderas’ career with WWE in the late eighties-early nineties when he has some problems with his direct boss at the time, where Korderas, though still working on the WWE house shows in the Toronto region, disappears from television completely. Again, given the significance of this period, the book would have benefitted greatly from the story behind this grievance between the two men, but Korderas refuses to go into details and presents it as a generic issue with no detail.

The best parts of the books are the chapters where Korderas addresses the deaths of Owen Hart, Chris Benoit and Eddie Guerrero, all of whom Korderas talks about with much respect. Korderas was the referee who was in the ring when Owen Hart tragically fell to his death in 1999 and here he speaks of his memories of that night and the difficulty he still has when looking back at it and what happened (Korderas was literally a few feet away from where Hart fell). It is these moments when a little of Korderas’ own personality comes out, as well as the Owen Hart recollections, his trying to make sense of the Benoit tragedy is particularly touching. When Korderas is searching his soul, the book hits its peak, which makes it more of a shame that these are only fleeting glimpses of his thoughts and opinions. 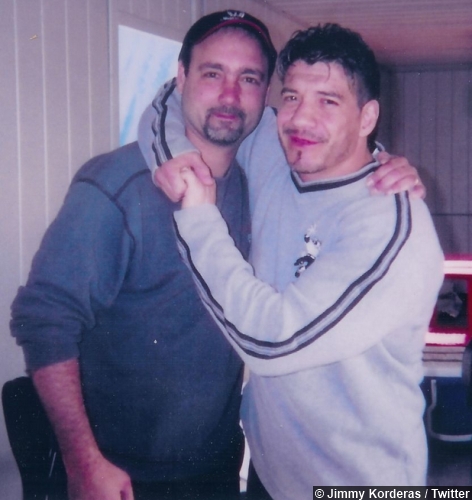 Korderas writing style is also unique in that he tends to strike a conversational tone linking story to story in ways such as: “I just remembered I wanted to tell you about this…” which again, is quite enjoyable at first but eventually feels unnatural. This extends slightly into annoying at times when Korderas says that he’s saving stories for another time- fair enough if he wants to bring out a second book, but does he really have to tell us that there is more to the story than he has revealed whilst we’re still reading?!

If you are looking for a gritty, tell all, account of life in the WWE, Jimmy Korderas’ autobiography ‘The Three Count- My Life in Stripes as a WWE referee’ is not going to satisfy your need. Instead, Korderas provides a collection of stories and anecdotes from his time on the road with the company which whilst entertaining, doesn’t provide the kind of insight into the business as some of the more ‘warts and all’ works that have been released in the last few years.

Overall ‘The Three Count- My Life in Stripes in the WWE’ is a worthy albeit, non-vital addition to the collection of wrestling literature out there. You won’t learn an awful lot that’s new from Korderas’ book, but if you’re looking for something to read and you enjoy your professional wrestling then this is more than sufficient holiday reading material.