On any list of professional wrestlers who have yet to commit their memoirs to print and have a fascinating story to tell, Lex Luger has to be pretty high up the order. Having been a major player in JCP, WCW and the WWE during the 80’s and 90’s his body of in-ring work and the stories behind his matches with Ric Flair, Dusty Rhodes, Nikita Koloff, Hulk Hogan, Sting and many others would be worthy of a book on its own. However, Luger’s personal life and the backstage politics of an era that included Luger as an important figure at many of its most critical times, make the prospect of a tell all autobiography, a mouth-watering prospect. 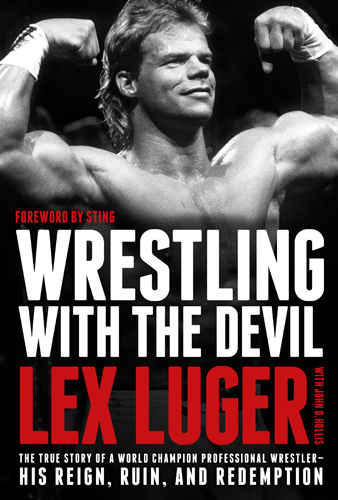 Luger after all, was at the centre of the happenings on Monday September 4th 1995 when the debut episode of WCW Monday Nitro aired and kicked off one of the most significant periods in the history of professional wrestling. It was his defection from the WWE to move to WCW in the days prior to Nitro’s launch that kicked off one of the most lucrative times the industry has ever seen.  Not that Luger hadn’t worked the business rivalry between the two companies to his advantage prior to that faithful night, having used the threat of leaving to work with McMahon as the basis for securing a huge contract in the late 80’s with Jim Crockett and then leaving WCW in 1992 to sign as part of McMahon’s new World Bodybuilding Federation.

Then of course there are the less savoury parts of the journey Luger has travelled having been witness to the tragic death of ‘the first lady of wrestling’ Elizabeth Hulette due to a drug overdose whilst the pair were conducting an extra-marital affair that had lasted over 3 years. Then having to overcome his own personal demons as he struggled with addictions to both recreational drugs and alcohol. As if that wasn’t enough to make this a compelling story, Luger later went through a spinal stroke which, it was believed, would leave him in a wheelchair for the rest of his life, only for Luger to battle through major adversity and walk again.

Unfortunately, this roller coaster of a story goes largely left untold in ‘Wrestling With The Devil’. Don’t get me wrong, Luger does cover all of the above and the story of how he got into the business, the major WWE push he received in 1993 and his relationship with other wrestlers such as Sting, Hogan and Bret Hart, but in truth he barely skims the service. This is a 215 page book and Luger’s wrestling career is done and dusted within 75 of them- some would argue that the ‘Lex Express’ and his time with WWE could have gone for that long, despite the chapter representing just 3 years of a 16 year career. As such, if you’re a wrestling fan, purchasing this book to get an insight into the business, you will be disappointed.

Having said that, there is not an awful lot else for the reader to sink their teeth into either. The rapid fire approach that his wrestling career is dealt with is indicative of everything in the book- his childhood, college years and pro football career all flash by in a series of short sharp paragraphs. Likewise the 3 year affair he conducted with Elizabeth prior to her death. Throughout these major set pieces, Luger runs through the events in a matter of fact way, in the order that they happened, rarely reflecting on anything for long enough to get past the narrow range of emotion that is expressed. This lack of a personal slant to the events that take place, leave the reader feeling cold and the narrative, impersonal.

Even the book’s centrepiece, Luger’s rebirth as a Christian after finding Jesus Christ, is hurried through. Luger states that his sole purpose in writing the book is to share his discovery of Jesus Christ and the support that the church offered him so that it might inspire others to see the light in the darkness of their own lives. He fails at this because he barely ever opens up about anything. Given the subject matter he is working with, it’s hard to believe that his story would leave you uninspired and yet that is exactly how you feel once done with the book.

Ultimately, ‘Wrestling With The Devil’ is a missed opportunity. Given the numerous moments in wrestling that Luger has been a part of, or been party to, a career that took him to the main events of both Starrcade and Wrestlemania and all around the world, and a public battle against personal demons and physical disability, this was a book that could have achieved so much more. As it is, it’s hard to imagine getting that much less insight from a skim through Luger’s Wikipedia page instead.