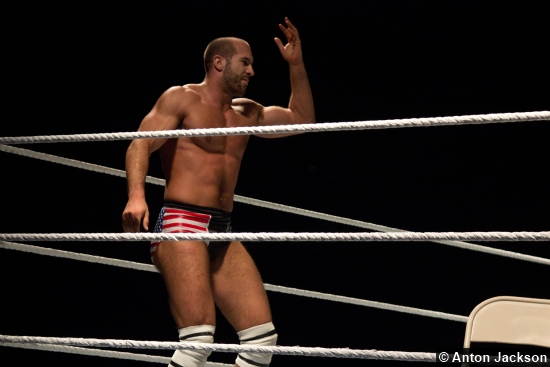 The opening match of the night was the featured attraction of WWE Main Event as, for the first time since winning the title three weeks ago on RAW, Kofi Kingston would defend the United States Title against the former champion, Antonio Cesaro. In an epic war over the title, Antonio Cesaro came within an eyelash of regaining the title on several occasions throughout the match, but in the end, it was Kofi Kingston coming out of nowhere with the Trouble in Paradise to the back of Cesaro’s head that would secure the victory for Kofi Kingston as Kofi successfully retains the United States Title.

Backstage, Kofi Kingston is on his way to his locker room following a hard fought retention of the United States Title against Antonio Cesaro, when “The Swiss Superman” jumps Kofi out of nowhere! Cesaro tosses Kofi into some plastic crates and steel pipes before pinning Kofi’s shoulder under a heavy wooden box, sitting on the box and telling Kofi that “no one” takes from Antonio Cesaro, he takes from Kofi. With that, Cesaro then rips off one of Kofi’s dreadlocks, taking it with him as he leaves Kofi lying in a heap!