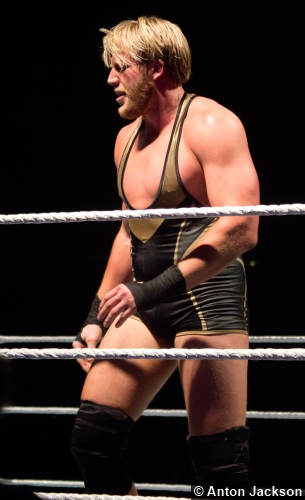 On the final stop before WrestleMania 29 this Sunday night, the 711th edition of WWE Friday Night SmackDown came to you from the Verizon Center in Washington, D.C. Two nights before he challenges Alberto Del Rio for the World Heavyweight Championship at “The Showcase of the Immortals”, “The Real American” Jack Swagger would go one-on-one with the high-flying Kofi Kingston. Also on SmackDown, exclusive footage from the WrestleMania Axxess festivities would be shown as WWE Superstars & Divas meet and greet the fans in New Jersey before “The Show of Shows” this Sunday night.

Two nights before he collides with Mark Henry at WrestleMania 29, SmackDown kicks off with Ryback as “The Sin City Cyborg” would face both Primo & Epico, with Rosa Mendes in their corner, in a 2-on-1 Handicap Match. In the end, it was Ryback dropping both Primo & Epico with a double Shell Shocked, pinning Epico to pick up the impressive win.

Live from WrestleMania Axxess in East Rutherford, NJ, Renee Young conducts an interview with World Heavyweight Champion Alberto Del Rio, asking Del Rio about the vicious attack by Jack Swagger & Zeb Colter on Monday’s RAW where both men wore the champion out with countless crutch shots to the back and ribs. Del Rio says that it is a good thing that Swagger & Colter are at SmackDown before saying that, after WrestleMania, he will be proud to say that he is still the World Heavyweight Champion.

Then it was time for the main event of the evening as, two nights before he challenges Alberto Del Rio for the World Heavyweight Title at WrestleMania, “The Real American” Jack Swagger, with Zeb Colter in his corner, would go one-on-one with Kofi Kingston. In the end, it was a brief distraction by Zeb Colter that would allow Jack Swagger to regain the advantage in the match, locking in the Patriot Lock on Kofi Kingston, forcing Kofi to tap out to pick up the win.