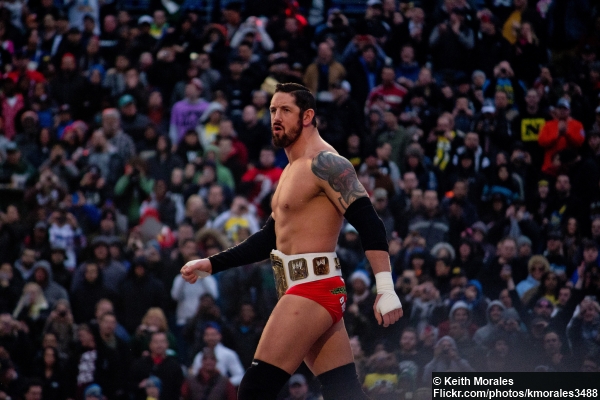 The show kicks off with ten WWE Superstars in the ring as Alex Riley, Yoshi Tatsu, Primo, Epico, Justin Gabriel, Santino Marella, Jimmy Uso, Jey Uso, Jinder Mahal, & Drew McIntyre would square off in a 10-Man Battle Royal with the winner becoming the #1 Contender for the Intercontinental Title with a title shot against champion Wade Barrett on the same night!

Before the Battle Royal got underway, Intercontinental Champion Wade Barrett says that he was “appalled” that he would have to defend his title against the winner of a battle royal, but then he saw the “caliber” of opponents in the ring. However, Wade Barrett is then interrupted by the surprise 11th man in the Battle Royal, “The Punjabi Giant” The Great Khali!

The 11-Man Battle Royal for an immediate shot at the Intercontinental Championship then got underway and, after some time battling in the ring, the first elimination occurred in the match as Drew McIntyre sends Jey Uso over the top rope. The second elimination saw Primo & Epico eliminating Yoshi Tatsu before The Great Khali scores his first elimination, tossing Epico out of the ring, followed shortly by Jinder Mahal. Later on in the match, Alex Riley, Primo, Justin Gabriel, Santino Marella, Jimmy Uso, & Drew McIntyre all tried to eliminate The Great Khali and, after failing the first time, the six-man union was able to hoist the giant over the top to the outside! Shortly after this, Alex Riley sends Jimmy Uso over the top rope to the outside with a dropkick, eliminating the Uso presence from the match. Alex Riley’s comeback story would then come to an end at the hands of Primo, who eliminates Riley from the match, leaving just four competitors left in the Battle Royal. Santino Marella manages to hit the Cobra Strike on Primo, but Primo falls through the ropes, avoiding elimination before Santino is sent out by Drew McIntyre. Justin Gabriel then eliminates Drew McIntyre before Primo charges Gabriel, but Gabriel side-steps Primo and sends Primo careening over the top rope to win the Battle Royal and earn an Intercontinental Title shot against Wade Barrett!

Then it was time for the main attraction of WWE Main Event as, moments after winning an 11-Man Battle Royal to earn the opportunity, Justin Gabriel would challenge Wade Barrett for the Intercontinental Championship. During the hotly contested matchup, Wade Barrett rolls to the ring apron to avoid Justin Gabriel’s 450 Splash, but behind the referee’s back, Barrett would rake the eyes of Gabriel before dropping Gabriel with the Bull Hammer Elbow en route to pinning Gabriel to successfully retain the Intercontinental Title.