Final Resolution is an odd little Pay Per View. Although it’s only been around for eight years it’s appeared on the wrestling calendar nine times, thanks to TNA bizarrely running two Final Resolution events in 2008 – one in January, one in December. This 2012 edition marks the last time the company offered the event, before moving to their new four PPVs a year model. So how does the final Final Resolution stack up? The Armchair Bookers Club finds out.

Well, half of the 8 match card is devoted to title matches (Tag, Knockout, X-Division, World) with the rest handed over to an unadvertised encounter, a continuation of the Bully Ray / Brooke Hogan love story, an ugly 8 man tag where Samoa Joe and Kurt Angle are hideously underused and finally the pay off to a ten year long on-again, off-again feud. So settle in. Here’s your spoiler free guide to TNA Final Resolution 2012. 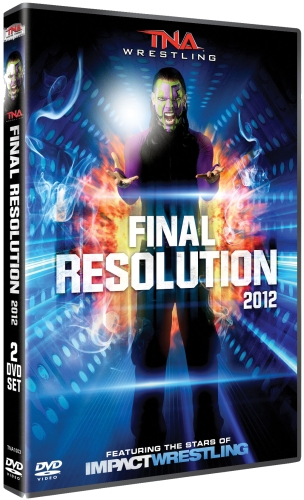 In a bit of an odd opener, James Storm – not scheduled for a match on the PPV – comes out and delivers a promo on Bobby Roode. The short version is that Storm’s disgruntled that Roode has the title shot against Hardy later in the night, so calls him out. We don’t get Roode, but rather Kazarian instead, who delivers an equally odd promo putting Christopher Daniels over and accusing Storm of being an alcoholic (to huge cheers from the crowd). Remember what you’re cheering, people. One quick brawl at ringside and the appearance of a TNA ref later and we’ve got ourselves an impromptu match. Who needs a storyline on a Pay Per View, eh? Both men do well and the vocal crowd are very much into this one, in spite of the zero build up prior to the match. Storm delivers the more hard-hitting moves here, as you’d expect, while Kazarian plays the sneaky heel role perfectly. Unexpected, so lacks the big match feeling for me.

Up next is RVD defending his TNA X-Division Title against former WWE Tough Enough semi-finalist Kenny King. The build up for this one comes from Kenny earning his title shot by defeating Kid Kash and Zema Ion in a great triple threat match. Just by getting that one win to earn the challenge makes King’s latest run in TNA more successful than his last, where he didn’t win a single match during his one year stay during 2005. He’s a very different wrestler now, in no small part down to his 5 or so year run in Ring Of Honor. To King’s credit, his style mixes very well with RVD because they’re so similar in many ways – both athletic, both comfortable striking from the air and with their feet, so this does deliver some good high flying and hard-hitting moments.

From the X-Division title, we go straight to the TNA Tag Championship match between title holders Chavo Guerrero and Hernandez facing off against Joey Ryan and Matt Morgan. Morgan’s wearing Hulk Hogan’s gold and purple 1970’s cape, and when standing alongside the moustachioed Ryan, makes this match look like it should be taking place whilst protests against the Vietnam War are going on outside. Morgan has the cape to show that he can do more in his career than Hogan, in some kind of surreal passing of the torch kind of way. When you bear in mind that Morgan headlined Final Resolution in 2010 by challenging Jeff Hardy for the World Heavyweight Championship without the cape, and with it is teaming with a chubbier, shorter version of Ravishing Rick Rude, he might want to rethink his ring attire. And yes, I’m trying to fill space rather than talk about another TNA PPV Chavo / Hernandez tag title match. Did I mention Morgan wears a cape?

If you’re wondering why the DVD has a 15 Certificate, the answer comes up next in a pretty bloody encounter between Austin Aries and Bully Ray. Going into this one, Aries has been verbally berating Brooke Hogan, but since Hogan doesn’t fight his own battles anymore, Bully Ray is there to defend his girlfriend’s honour. Aries already has one clean win over Bully Ray from back in 2012’s Sacrifice Pay-Per-View, where Bully was forced to tap after Aries applied the brilliant Last Chancery submission (why doesn’t he use that so much anymore?). That makes this the most storyline driven and developed match on the card so far, stretching back seven months. Some really nice moments include Aries spoofing Hulk Hogan’s legdrop, Bully landing a missile dropkick that bounces Aries out of the ring, and Bully introducing Aries to his boot after a suicide dive doesn’t quite work out for “A-Double”.

After a painful interview where the “Hollywood Power Couple” try to introduce the nickname “Pec-Tacular” for Jesse (no, I haven’t seen it on a t-shirt either), we’ve got Tara defending her TNA Knockouts title against Mickie James. Tara’s mid way through her fifth title run, making her the most successful Knockout in TNA history, whilst Mickie is hoping for her third. James earned this shot after winning a Knockout Battle Royale. Both women deliver a reasonable match, but you can learn all you need to know about his match when you consider the biggest reaction from the crowd comes when Mickie manages to knock Jesse from the ring apron.

The Aces & Eights invasion rumbles on with an 8 man tag match between Kurt Angle, Samoa Joe, Wes Brisco and Garett Bischoff taking on Devon, D.O.C. and… two other members of Aces & Eights who never get named – we’ll call them Ace 1 and Ace 2. Actually, we won’t. If the announcers can’t be bothered to differentiate between them, why should we? This is a pretty ugly match. It’s hard to expect an audience to invest in two unknown masked men, and Brisco and Bischoff show their rookie status clearly in this one. Samoa Joe, as always, is great though, and there’s still a lot of fun to be had from seeing Angle go on a suplex rampage, but the match is too scrappy to be really enjoyable. One particular lowlight sees Brisco land the least convincing spear in the world against D.O.C, which bounces Eric clean out of the ring, and sloooowly moves D.O.C. back… a bit. Ugh. Let’s move on, shall we?

Next up is what’s promised to be the culmination of a ten year long rivalry between A.J. Styles and Christopher Daniels. A nice video package highlights the history these two have, with the announcers flagging up the fact they’ve fought everywhere from cage matches, Ultimate X matches, traded titles and took their feud around the world. The figure of 115 matches is thrown around, just to underline the history here. Nice job on the build up, that. For the record, these guys first met in a TNA PPV back in 2005 at Against All Odds, where A.J. retained his X-Division title in a stunning 30 minute Iron Man match. This one doesn’t quite reach that gold standard, but it is close – there’s a real intensity between these two that comes from knowing one another so well. They sell the desperation for the final defining win brilliantly. Some of the many highlight-reel worthy moments include Daniels slamming Styles on the steel steps, both men dropping each other awkwardly on the ring apron, A.J. landing some impactful top rope moves and a great and truly unexpected ending with one man being beaten courtesy of his own finisher. Loved it – easily the best match on the card.

Closing out the night is the TNA Heavyweight Championship match between Bobby Roode and champion Jeff Hardy. Roode starts very strong, dominating Hardy for the first ten minutes or so. The crowd weren’t expecting that, so are pretty flat for the opening moments of the main event. The Impact Zone gets louder though as Hardy makes his comeback and the action becomes much more back and forth between the two. The latter half of the match is much stronger, with Roode delivering some impressive power moves, and Hardy drawing upon his usual range of top rope, high risk acrobatics. There’s an awkward moment near the close of the match where Aces & Eights come out again, and you’ll fear a run-in finish. That doesn’t quite happen – the run-in comes after the match is over – but the timing of it kills any post-match reaction from the crowd, leaving them and the viewers at home confused. To give you an idea of how quiet the crowd are after the booking of the post-match beat-down, you can hear perfectly clearly a young woman who screams “I hate all of you!” during the run in. Ooops. An odd ending to a generally weak PPV.

The lightest TNA extras disc so far brings just two special features to mark Final Resolution. The most notable extra is the Before The Bell: Final Resolution documentary, which divides its 30 minute running time between the Bully Ray / Aries, Styles / Daniels and Roode / Hardy matches. The only other extra up for grabs is a 5 minute montage of short post-match interviews with RVD, Aries, a very bloody Bully Ray, Daniels and an attempted interview with AJ Styles.

Hmmmm… how to sum up Final Resolution? Well, it lives up to its name with the Styles Daniels “Last Time” match, drawing a definitive line under a decade long series of classic competitions between the two veterans. That match felt like the most important on the card, which when an event is headlined by a World Title defence, is a worrying sign. Bully Ray and Austin Aries also did a great job in their encounter, if you overlook the soap opera moments that are sprinkled throughout it. From there, though, everything’s a bit lacklustre. Pay Per Views are supposed to provide an exclamation point to end a feud, or a reason for it to burn on, so the unadvertised Storm Kazarian match felt last-minute, at best. The big eight man tag was scrappy and tag tiles contest a little flat. Styles / Daniels, Aries / Bully Ray and Hardy / Roode save the night – but don’t be surprised if the rest has you reaching for the fast forward button.

Armchair Bookers Club Rating: 5 out of 10