With Wrestlemania XXIX so close we can almost taste it, Wrestling101.com offers up food for thought-in the form of a juicy round-table discussion. Dean Reilly,dsrchris and OliverJKSmith form this triple threat of thought. 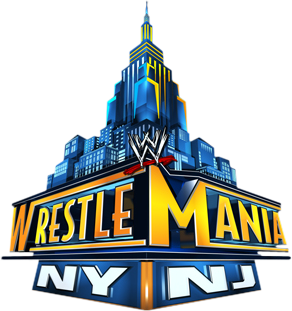 What match are you most looking forward to and why?

Oliver JK Smith: The match I am most looking forward to has to be the main event itself: Rock vs Cena II. I’ve surprised myself with this answer, but the truth is, I am intrigued. I’m intrigued to see how the contest will differ from last year. I’m intrigued to see if Cena will go over clean; If you had asked fans this time last year to predict what match would go on to headline Wrestlemania 29, they would have probably guessed Rock and Cena going at it for the second time. Ironic really, that the most predictable match on the card, also poses the most questions.

Dean Reilly: For me, it’s going to be the HHH Vs Brock Lesnar match. Trip has delivered some stunning performances over the last few years, especially with the back-to-back Undertaker matches, so should be able to bring a real hard-hitting performance at Mania. OK, Brock’s a part-timer, and there’s plenty of argument for one of the more regular performers getting a spot on the card, but what Lesnar does bring is a genuine sense of bad-assery which should really add to the intensity of his match with Trip. I expect this one to be bloody and brutal, and could provide some real show-stealing moments at Mania this year.

dsrchris: Hmmm. Probably 6 man with Shield vs. Sheamus/Orton/Show. I think that one will probably be the “crazy bump” match of the night in the absence of MitB, and with the possibility of the Shield going over and Orton turning (or at least beginning to), there could be plenty of cool stuff to make this the sleeper hit of the evening.

Your thoughts on the streak, will Punk end it? 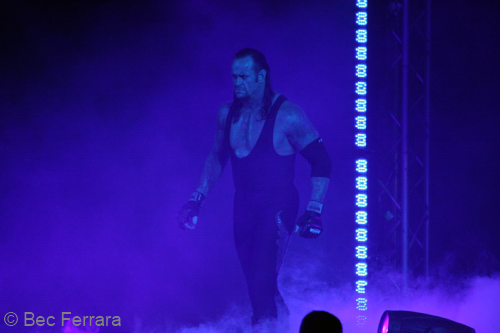 Oliver JK Smith: Incorporating the ‘real-life’ death of Paul Bearer (William Moody) has conjured mix opinions across the WWE universe, I for one do not object to WWE using of the ‘the urn’ within recent segments. CM Punk playing mind games with ‘Taker on a personal level takes nothing away from the monumental story of ‘The streak’.- It enhances this programme,  adding layers to an already conceivable plot. Reference to Undertaker’s super natural powers will appeal to the younger audience, whilst the older/smarter fan will be anticipating a show-stealing wrestling clinic come April 7th. If creative decided the streak would end within this current era of WWE, there are only two conceivable choices: Super Cena and CM Punk. Yet, given how much I enjoy Punk, I would suggest that who ever (if there ever is anyone) ended the streak, would potentially do more harm to his career than good; The stigma of ending the precious institution would always be a hard act to follow and there would be those who would never forgive the second city saint if he beat The Undertaker.- For this reason alone, I see no benefit/reason as to why Punk will take the win, regardless if he has ‘urned’ it or not!

Dean Reilly: The short answer is no. The slightly longer answer is that, even in the WWE, some things are sacred. Punk’s a great performer and carried the title brilliantly for a long, long time – but no one’s beating Undertaker at Wrestlemania. Expect the final moments to be Undertaker regaining the urn, saluting it, and 21-0 burning on the big screen behind him.

dsrchris: Most likely not, no. Y’know, before Paul Bearer died there was a real strong argument (in my mind at least) for Punk going over. Now this angle is basically a final goodbye to Paul Bearer (which I am 100% all for, and think it’s gonna be a real nice moment for everyone on Sunday), so the only way this is ending is Punk losing and Taker regaining the urn.

Rock or Cena? Where does your allegiance lie and why? 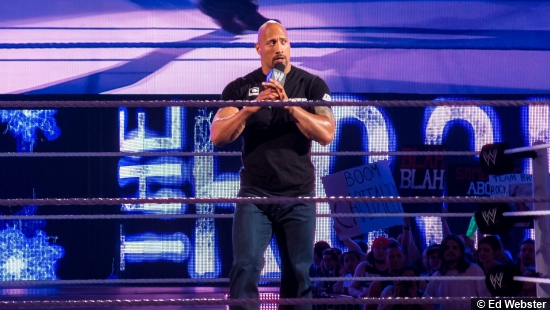 OliverJKSmith: I never thought I’d say it, but I will be cheering on Mr Cena this Sunday…Many fans have aired there grievances with the ‘twice in a lifetime’ contest between Rock and Cena, I for one am fully behind the programme. Contrary to ‘Rockular’ belief , the WWE is for life and not just for Wrestlemania. John Cena, and how he is portrayed coming out of ‘Mania is the most important thing here. I think the story of ‘redemption’ turns Cena human again in the eyes of the WWE Universe, it gives us reason to want John to win beyond notching up yet another title run. This is not a conventional story of good vs evil, this is real. If there had to be a heel here, it would be ‘The Great One’; It’s no coincidence that Rock’s part time status ultimately highlights how much Cena has given to this industry since Dwanye’s departure to bigger things.

Dean Reilly: Allegiance is probably the wrong word for me, because I’m not particularly a fan of either. Don’t get me wrong – I get why so many people are. Rock’s mic work is awesome and is responsible for some very memorable moments, but he’s too infrequent a visitor for me to really invest in. He brings a great deal of mainstream attention to the WWE ring, though. Likewise, as this generation’s Hulk Hogan, Cena does great business for the WWE, but unlike Hogan at his peak really divides the crowds. Call me old fashioned, but if I had to put the win in either Rock or Cena’s column, it’d go to Cena. He’ll be there more regularly, let more crowds see the WWE championship at live shows, not just TV tapings, and deserves to even the score after last year’s match. My best case scenario is that Rock puts Cena over clean… or maybe Cena even turns heel to win at all costs. That could shake things up nicely.

dsrchris: Surprisingly, John Cena. I know, I never thought I’d say that either?! But I’m just not impressed with “part time Rock” as champion. He’s only here to promote his movies, so let’s just get the belt off him and keep our fingers crossed that WWE have the sense not to book Cena as superman again for the next…oooh, let’s randomly pick a number…435 days at least?

Who has most cause to be upset with their billing on the card?

OliverJKSmith:For the first time in recent memory, it would appear that creative have too many high calibre stars and not enough high calibre spots to fill. Matches have felt forced, rushed and at times unnecessary. Every superstar who has cause to feel hard done by, will likely be asked to appreciate the bigger picture. I’m sure Jericho will be looking forward to putting over the debuting Fandango, whilst Orton, Big Show and Sheamus should feel privileged to be part of The Shield’s metamorphic rise. If I had to pick one wrestler who deserves more out of this Wrestlemania, it would have to be the Swiss sensation Antonio Cesaro- because he has been afforded nothing! Second only to Punk’s lengthy title run, Cesaro’s reign as US champ has been a breath of fresh air throughout the WWE Universe. Not only is ‘Mania missing out on a great performance from an outstanding in-ring talent, booting the bi-lingual beast de-values the title he has worked so hard to restore. 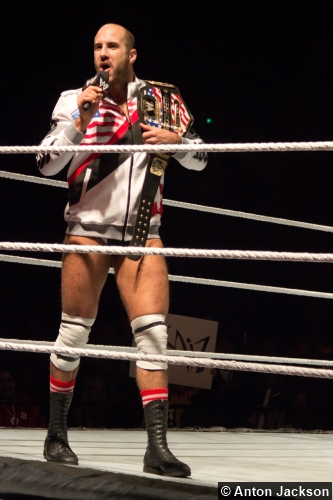 Dean Reilly: To be honest, I think everyone on the card should be happy they are there – because there’s plenty of great performers who aren’t. Antonio Cesaro is notable by his absence, which is a real surprise after being a real workhorse for the WWE this year. Kofi  Kingston always provides some nice spots too, but he’s nowhere to be seen either. So that being said, if any of the booked performers do  grumble, they should chat to some of the unused talent first.

As an aside, Fandango should be happiest with his spot – having his first official WWE match as with this character (let’s ignore his NXT run) is a real coup. With Jericho in the mix, this one should be great.

dsrchris: Take your pick, man. There’s Ziggler, who is still “enjoying” the “benefits” of being Mr MitB. What’s he doing getting thrown into a tag match for the titles when there’s better things for him, and for the Tag Champs to be doing? Wade Barett’s gotta be p*ssed that he’s not even on the main card. Team Rhodes Scholars are getting thrown into a nothing match when they should be challenging for the titles. Actually, think about Kaitlyn, you’d think being Divas Champ would guarantee you a nice WrestleMania payday, maybe even a celebrity match (sure you may have to team with someone the equivalent of Snooki, but it’s all good exposure). But she gets nothing. Maybe she’ll pop up in a backstage segment, or get to escort a hall of famer out onto the stage. Yay. No time for Divas, but Diddy gets 8 minutes? GTFO.

Finally, looking back over the last 12 months, who deserves their ‘Mania moment’ the most and how would you book it?

OliverJKSmith: Given Ryback’s colossal push over the last 12 months; The sin-city cyborg has commanded something big for his first ever Wrestlemania, and they don’t come much bigger than the ‘World’s strongest man’ Mark Henry! Henry has proved a welcome distraction for those still hung-up on Ryback’s title chase earlier this year; The test of strength between the two big men has added a compelling and welcome contest on an a card which has otherwise been described as ‘re-matchamania’ An event which is sold on creating ‘Wrestlemaina moments’, Ryback will be granted his, Shellshocking Mark Henry and solidifying his legacy as legitimate main event-er for the year ahead. 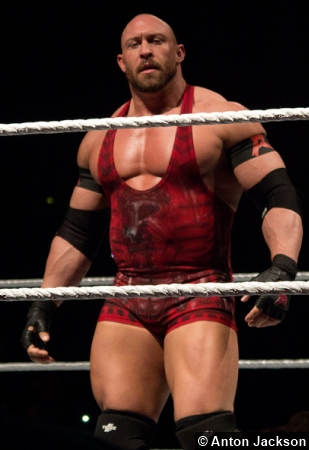 Dean Reilly: I think the most deserving man on the card, And one who earned a really defining Wrestlemania moment this year, is CM Punk. Sadly, he’s against the Undertaker so he’s locked out of winning, but could steal the show. So if we’re suggesting that a Wrestlemania moment means a Wrestlemania win, I’d share that honor between the Shield. Those guys have been a real breath of fresh air over the last year. They’re intense, hungry, have bucket-loads of potential and are doing something really interesting with their three-man dynamic. Roman Reigns in particular is shining. So to give them their Wrestlemania moment, I’d have them go over the face team cleanly and dominantly. They’ve earned it.

dsrchris: As I said earlier, had we not recently lost Paul Bearer, then I would’ve booked Punk to end the streak. Coming off the back of his record breaking title reign I’d have put him over Taker, then moved him on to facing off against Brock around Summerslam time, with the long play being getting Punk some legitimate wins over legends to make him look like a serious threat against Austin at WMXXX. Yeah, like any of that would EVER happen.

Actually, I pick the Shield. They’ve had a phenomenal start to 2013, so I’d love to see them continue to be pushed as a major threat to EVERYONE in WWE. BELIEVE IN THE SHIELD!!

So there you have it, your Wrestlemania weekend is almost complete. To those who are watching the event live, we hope you enjoy! And for anyone who isn’t able to, check back with wrestling101.com for all the fall out from the show of shows!