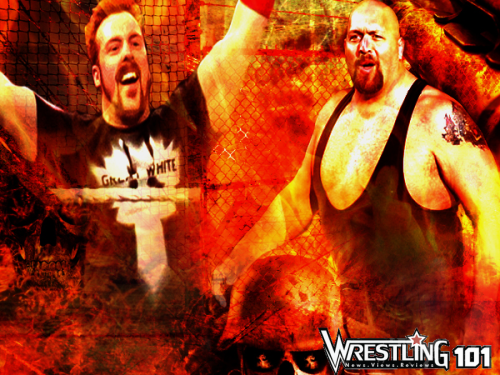 With only nine nights left until “The Show of Shows” WrestleMania 29, the 710th edition of WWE Friday Night SmackDown came to you from the Giant Center in Hershey, PA. Before he defends the WWE Championship against John Cena on “The Grandest Stage of Them All”, the WWE Champion will be on SmackDown as The Rock makes a rare appearance on Friday Nights! Also, before their titanic clash at WrestleMania, Ryback and Mark Henry would go head-to-head in a Bench Press Challenge as “The Sin City Cyborg” and “The World’s Strongest Man” look to prove which one of them is undoubtedly the strongest!

Just over a week before he defends the WWE Championship against John Cena at WrestleMania 29, SmackDown kicks off with the man himself, “The People’s WWE Champion” The Rock. The Rock tells a story of when he and his family moved to nearby Bethlehem, PA when he was fifteen years old and, living in Bethlehem, he and his friends would go to a certain “park”, the famous Hershey’s Park. The WWE Champion continues, saying that, when he used to come to Hershey, he always wanted the Hershey’s Whatchamacallit and, when he finally found one, someone got in the way and got it before him. Rock then says that he told that individual that, if he did not put that candy bar down, he was going to kick that person’s “candy ass”! The Rock continues, saying that being a man means going to “great lengths” to get what you want before saying that he kicked John Cena’s “candy ass” on RAW and he will continue to do so. However, the WWE Champion is then interrupted by a man who has not been seen in the WWE since June of last year when he was unceremoniously fired as the General Manager of both RAW & SmackDown as none other than the innovator of “People Power” himself, John Laurinaitis!

The Rock’s first question for John Laurinaitis is “who in the blue hell are you?” and Laurinaitis responds, asking the WWE Champion if that is a “trick question” before introducing himself as the former Executive Vice President of Talent Relations and the former General Manager of RAW & SmackDown John Laurinaitis, saying that the entire world knows who he is. The Rock stands unimpressed, saying that Laurinaitis must be mistaking him for someone who “gives a crap”! Laurinaitis then reveals that his former rival and the current Senior Advisor to the SmackDown General Manager, Theodore Long, gave him permission to come out there and talk to The Rock. Laurinaitis continues, saying that he knows that everyone expects to happen, as they expect him to “talk too long” and end up getting laid out with the Rock Bottom. Laurinaitis says that’s not going to happen, saying that he and The Rock are a lot alike as The Rock is “The People’s Champ” and he invented “People Power”. Laurinaitis continues to crow about his past accomplishments, touting himself as “the greatest General Manager that the WWE has ever seen”, but it was ruined by John Cena. Laurinaitis then states that Cena was the reason he was fired and Cena is the reason that he is back. Growing ever impatient, The Rock tells Laurinaitis that, if the former GM does not get to the point, then he is going to whip Laurinaitis’ “monkey ass” all over the arena! Laurinaitis then gets to the point, saying that he has a “business proposition” for The Rock, saying that they are both businessmen, proposing that he be in the corner of the WWE Champion come WrestleMania! Laurinaitis continues, saying that, with him in The Rock’s corner, there is no way and “Big Johnny means no way” that Cena can win at WrestleMania. Laurinaitis then tells The Rock that they are like the Resse’s peanut butter cup, they are “two great tastes that taste great together.” The Rock says that it’s only fair if they involve the “people”, asking the fans if they want to see the “stale, old, indigestible, stick-to-the-top-of-the-roof-of-your-mouth-until-you-want-to-vomit piece of peanut butter” team up with the “most electrifying piece of chocolate that the world has ever seen”. To no surprise, the fans flood the arena with “boos” before saying that he has a proposition of his own, saying that he and Laurinaitis should work together to “send a message” to John Cena. Laurinaitis agrees and The Rock offers a handshake to Laurinaitis, promising not to hit Laurinaitis with the Rock Bottom. The two would shake hands, but The Rock would not let go as the WWE Champion would pull Laurinaitis in, dropping the former GM with a spinebuster before dropping the People’s Elbow on “Big Johnny”!

Before he goes one-on-one with Fandango at WrestleMania 29, “Y2J” Chris Jericho would go one-on-one with Intercontinental Champion Wade Barrett in a non-title match with Wade Barrett’s challenger at WrestleMania, The Miz, a guest on commentary. During the match, Wade Barrett would opt to pick a fight with The Miz on the outside of the ring and, while Barrett would avoid getting counted out, the distraction would benefit Chris Jericho as, once in the ring, Barrett gets caught with the Codebreaker by Jericho en route to Y2J picking up the win. After the match, Chris Jericho says that he would love to savor his victory over the Intercontinental Champion, but he notices that the elaborate setup for Fandango’s entrance has been set up. Jericho then decides to give pronouncing Fandango’s name another try, calling Fandango by the names, “Fan-ding bat, Fan-doodle, Fan-naki, Fan-Danny DeVito, Fan-tom of the Opera” before reciting a piece of the famous “Bohemian Rhapsody” by Queen, singing “Fan-I see a little silhouette of a man, gala mouse, gala mouse, can you do the Fandango?” Not amused, Fandango and his dance partner dance their way down the ramp, but when Jericho welcomes Fandango into the ring for a fight, Fandango backs off, opting to take his leave, but not before dancing on the stage.

In an interview conducted earlier in the day by Josh Mathews with Brock Lesnar’s representative, Paul Heyman, Heyman says that Brock will “crush” Triple H in their No Holds Barred Match at WrestleMania where Triple H’s career will be on the line. Heyman says that, after Triple H’s career is over following WrestleMania, Triple H will have to “sit behind a desk” and live vicariously through the Superstars that can compete in the ring as the COO will have to sit back and watch the Superstars compete in the ring, only being able to “fantasize” about competing in the ring. Heyman continues, saying that Triple H will grow to “resent” the WWE roster and, eventually, the roster will “rise up” against Triple H. Heyman then says that Triple H made two of the biggest “mistakes” of his life, saying that Triple H thought that he could match Heyman “intellectually”, saying that the COO is “no match” for him in that department. Heyman continues, saying that Triple H thought that he could compete with his client, Brock Lesnar, “physically”, saying that Triple H is certainly “no match” for Brock in that department, as well.

Before Ryback and Mark Henry square off in a Bench Press Challenge, SmackDown General Manager and soon-to-be Hall of Famer Booker T, along with his Senior Advisor, Theodore Long, make an appearance to explain the competition. Booker first introduces “The Sin City Cyborg” Ryback, who marches out to the staging area where a weight bench awaits the two powerhouses. Booker then tries to introduce Mark Henry, but Theodore Long steals the spotlight, taking it upon himself to introduce “The World’s Strongest Man”. Mark Henry comes out and, immediately, the two behemoths looked ready to fight, but Booker T restores order, revealing that he has put a “no contact clause” in for their match at WrestleMania, stating that, if either Ryback or Mark Henry come into physical contact with each other before WrestleMania, then they will both be pulled from “The Show of Shows”. Theodore Long again interjects himself into the situation, saying that he thought that they flipped a coin backstage to determine who would go first in the competition, granting Mark Henry the opportunity to go first. With a referee keeping a close eye on the proceedings, Mark Henry chalks up his hands and gets in his zone before taking to the weight bench. As Ryback watches intently, Mark Henry does an astonishing 53 reps, setting a brand new world record! Then, it was time for Ryback to hit the bench as “The Sin City Cyborg” pumps out 52 reps, but before Ryback can tie Mark Henry’s score, “The World’s Strongest Man” steps in, shoving the referee out of the way before pushing the entire 225 pounds down onto the throat of Ryback! Ryback narrowly manages to break free, but the damage was already done as EMT’s tend to “The Sin City Cyborg”, who struggles to breathe or even stand. Ryback manages to get to his feet on his own, refusing assistance from the medical personnel.

Before he teams with Big E. Langston to challenge Kane & Daniel Bryan for the WWE Tag Team Titles at WrestleMania, “Mr. Money-in-the-Bank” Dolph Ziggler would team with his girlfriend, AJ Lee, with Big E. Langston in their corner, to face one-half of the WWE Tag Team Champions, Daniel Bryan, and the Divas Champion Kaitlyn, with Kane in their corner, in a Mixed Tag Match. After a calamity of action in and out of the ring, it would come down to Kaitlyn and AJ Lee as the Divas Champion drills AJ with the Spear en route to picking up the win for herself and Daniel Bryan.

With his World Heavyweight Title match against champion Alberto Del Rio quickly approaching at WrestleMania, Jack Swagger was in action on SmackDown as “The Real American”, with Zeb Colter in his corner, would go one-on-one with “The Punjabi Giant” The Great Khali, with Natalya & Hornswoggle in his corner. During the match, Jack Swagger would soften the ankle up of The Great Khali before locking in the Patriot Lock on Khali on the outside of the ring, leading to both men getting counted out. Things would only get worse from there, however, as, when Hornswoggle tries to get Swagger off of Khali, Swagger turns his attention to the pint-sized Superstar, hurling Hornswoggle into the ringside barricade. The injured Ricardo Rodriguez then appears on the stage, distracting Swagger long enough for Alberto Del Rio to attack as the World Heavyweight Champion locks in the cross armbreaker on his challenger! However, Zeb Colter claws at the face of Del Rio, forcing Del Rio off of Swagger, but Rodriguez would get a measure of revenge, breaking his crutch over the back of Colter! Rodriguez then tosses the crutch to Del Rio, but Swagger is able to dodge the weapon, making a hasty exit from the ring.

Backstage with WWE’s newest interviewer, Renee Young, Big Show, Sheamus, & Randy Orton state that they all have a common goal in eradicating The Shield, but it was not long before Big Show and Sheamus start to bicker. However, Orton again diffuses a volatile situation, telling Renee that they are all on the “same page” and saying that it’s “bad news” for The Shield.