The ninth annual Turning Point Pay-Per-View marks the second time Jeff Hardy headlined the event as Champion, after first doing so back in 2010. It was also the second PPV in a row where he and Austin Aries would compete for the TNA Heavyweight Championship. So with all of these second-time-around moments at the top of the card, does Turning Point feel second best compared to Bound For Glory 2012? The Armchair Bookers Club finds out.

Well, the 8 match strong Turning Point card does boast four big title matches, but the theme of “haven’t we seen this before?” keeps on cropping up. The opener and main event are rematches from Bound For Glory, while the Tag Title match sees two of the three teams that mixed it up at BFG go at it one more time too. Bobby Roode and James Storm keep their feud going, again in a rematch of their brutal and bloody BFG match, albeit with the introduction of A.J. Styles into the mix. Here’s the spoiler free breakdown of each match, to help you decide if you actually can get too much of a good thing. 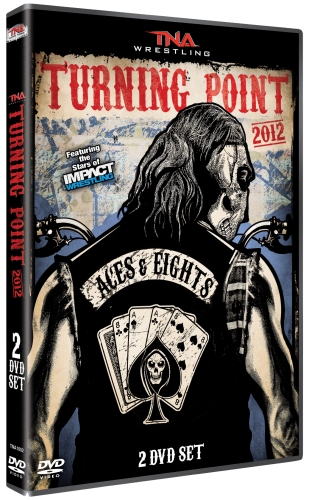 Taz opens up the show with an appeal for the victims of Hurricane Sandy which hit the East Coast of the US shortly before the Pay-Per-View aired. He brings out Bully Ray and US radio personality Buckethead to lead the Impact Zone in a money raiser for the Red Cross. It’s an odd little pre-titles opener, but nice to see TNA doing their mini-telethon thing.

One teaser video later and we’re into the action, with the No DQ TNA TV title rematch between Samoa Joe and Magnus. Samoa Joe is a really safe pair of hands to open a show. He’s intense, hard hitting, and always gets a great reaction from the crowd. He and Magnus did a brilliant job at Bound For Glory with their TV title match, so this rematch held a lot of promise. Magnus had the momentum going into this one, after getting a pin over Samoa Joe in a recent Impact six-man tag match. Both big guys seemed to turn up the pace a little from their previous encounter here and you’d be forgiven for expecting a weapon laden encounter thanks to the no DQ stipulation. In fact, the only move that made the match feel like a no holds barred competition it was advertised as being was a quick chairswing in the opening minutes. That aside, the action stayed very much inside the ring, bringing you the most technical no DQ match you’ll ever see. Another great match from both men, but you’ll be left wondering why the no disqualification stipulation was needed if things never really ended up in a hardcore way.

The mixed tag match saw TNA Knockout Champ Tara and her on-screen lover Jesse take on the Knockout Tag Team Champions of ODB and Eric Young (yeah, I know, a male wrestler co-holding the Knockout Tag Championships. Don’t blame me, I didn’t book it). The crowd are fairly into this one, and the rookie Jesse does a very good job of working with the more experienced trio. Eric Young looks like a weird mixture of (working from the head down) Bushwacker Luke, Headbanger Mosh and Rocker Marty Janetty, if that’s not too terrifying an image to paint. Could have been truly awful, but turned out to be an entertaining little mixed tag match.

Next up is a recap of the Aces & Eights attack on Sting, where Doc went all hammer wielding crazy on him. The announcers inform the viewers at home that Sting is under the care of surgeons in Texas, explaining away his absence, and Hulk Hogan is keeping an eye on him there, so no Hogan either.

Next, back when RVD had a current TNA contract, is Rob Van Dam’s X-Division title defence against Joey Ryan. The angle going into this one is that Joey Ryan’s partner Matt Morgan is barred from ringside. This one gives both men some time to shine. The announcers reference RVD’s championship runs in both TNA, ECW and the WWE, whilst underplaying Ryan’s experience and skills. Ryan shows he’s got some high flying moves in him to match RVD’s, landing a very nice suicide dive through the middle ropes to meet the champ on the outside. Now that TNA have changed all X-Division matches to be triple threats, you need to make the most of these tradition one-on-ones – and this was a good one.

The WWE has their own lawyer / wrestler in David Otunga. TNA has Joseph Park. Stepping into the ring for his third official TNA match (and still with no music or entrance video), Park takes on Aces & Eights D.O.C. Highlights include D.O.C. landing a beautiful moonsault and Park unveiling a stunning shooting star press. OK, neither of those things happened. Park as the plucky, reluctant and inexperienced rookie and D.O.C. as an Aces & Eights brawler means you were never going to get a technical masterclass, but both men do well in this one.

Chavo Guerrero Jr. & Hernandez put their Tag Titles on the line against the team they defeated at Bound For Glory, Christopher Daniels and Kazarian next. Watching this after also just catching TNA’s Lockdown 2013 and reviewing Bound For Glory 2012 really does flag up that the tag roster needs some attention within Dixie Carter’s company. There’s only so many times you can see Hernandez and Chavo mix it up with Daniels and Kazarian – even if you do throw in a third team for variety. No disrespect to either team, but the repetition is born out of a lack of talented teams rather than a desire to give the crowd more of what they want. What this familiarity does bring, however, is that all four men have great chemistry in the ring, It’d just be refreshing to see some other big players shake up the tag team division.

Following the tag title clash, we’ve got our triple threat match to determine the Number One contender for the TNA Heavyweight Championship. After ripping one another to bits at Bound For Glory, Bobby Roode and James Storm go at it again, but this time with AJ Styles in the mix. The stipulation going into this one is that whichever man gets pinned, submits or is disqualified will be locked out of the TNA title picture until, at the earliest, Bound For Glory 2013. There’s no broken beer bottles, thumbtacks or bucketloads of blood this time around, which is good news for the health and long-term careers of all three stars. The introduction of Styles adds some fantastic high flying and equally high risk moments in this one. There’s also a nice tease for long-term TNA fans hinting at a potential Beer Money Inc. reunion, albeit briefly. A very strong triple threat match, which really sells the value of the TNA title with all three wrestlers desperately fighting to get the No. 1 contenders spot here.

Continuing the Aces & Eights versus TNA storyline, Devon steps in against TNA’s very own patriot, Kurt Angle next. Watching Angle do what he does best never gets old, and time away from Team 3D has given Devon the chance to show what he can do in singles matches, so put those two things together and you’ve got the recipe for a good ole fashioned grudge match. Angle suplexes Devon around like a ragdoll, Devon plays the vicious heel perfectly, they both push the invasion storyline on and bring a suitable level of intensity to their match. Lets face it, Angle is always best when he’s angry. And yes, the Aces & Eights invasion angle still reminds me of the WWF Disciples of Apocalypse stable. The good thing about that is that it’s just a question of time before TNA rolls out a Los Boricuas style Puerta Rico team too (Google them both, you’ll be glad you did).

Closing out the night is the Ladder Match for the TNA Heavyweight Championship. Aries and Hardy put on a real match of the year caliber performance at Bound For Glory, and the introduction of a ladder or four adds a really brutal side to the main event. Both men still bring their technical skills into play, but take some sickening bumps for good measure – Hardy, especially. Highlights include Aries being catapulted into a ladder and landing hard on his head courtesy of a Hardy Japanese Arm Drag, Aries launching a suicide dive onto an out of the ring Hardy, just avoiding a dangerously positioned ladder on the arena floor, and a genuinely scary finisher that could have comfortably left one or both men with a broken neck or worse. A great, great main event.

As an aside, find out where TNA purchase their ladders so you can make sure you never, ever buy anything from there. At least two end up buckling badly mid-match, at one point meaning the refs outside the ring have to actually reach in to steady one whilst Hardy is climbing it. Seriously, TNA: if you’re going to ask your stars to take part in career shortening matches like this, at least make sure they have a strong ladder to do so with.

The best extra on offer is the 25 minute Before The Bell: Turning Point documentary focusing on the Hardy Aries main event match. In comparison to the recently reviewed Bound For Glory bonus disc, however, Turning Point’s extras feel quite light in comparison. The music video is a nice enough package of TNA action cut to God Forbid’s Equilibrium track, and again focuses exclusively on the main event. The 30 second TV promo spot is pretty disposable, and continues the theme of spotlighting only the Heavyweight Title match. The post match interviews do look beyond the main event though, spotlighting James Storm, Bobby Roode, Chavo and Hernandez, Samoa Joe, Doc, Joseph Park as well as Jeff Hardy.

You can’t help but feel that this Pay-Per-View, when viewed after Bound For Glory, feels like a stop-gap rather than a real standout moment on the TNA calendar. The absence of Hogan as General Manager takes a little of the superstar shine off the evening, even if he normally does just appear at ringside or bark orders from the back, and the missing Sting doesn’t help matters either. That being said, what is here covers the “good” to “brilliant” range, with the main event of the evening really stealing the show. There isn’t a weak match on the card, and Hardy and Aries deserve genuine credit for some heart-stopping moments in their ladder match main event.

What’s also apparent though, is that TNA’s booking seems to focus on doubling up at such events – letting two men or teams fight at one Pay-Per-View, then putting them together again at the next with either A: another wrestler or team to shake things up, B: a different stipulation or C: both. I’m all for longer angles, and giving wrestlers time to tell their stories in more than four week windows, but when patterns start emerging across three or even four such Pay-Per-Views, something’s not right. A worthy addition to your collection, if only for the insanity of the Hardy Aries main event… but something different next time, please TNA?

Armchair Bookers Club Rating: 7 out of 10