The NFL has the Superbowl. WWE has Wrestlemania. TNA has Bound For Glory. Since 2005, this flagship event on the TNA calendar has seen some incredibly memorable moments, true match of the year candidate competitions, historic title changes, shocks and surprises for wrestling fans. So how does the line-up for 2012 look in comparison? The Armchair Bookers Club finds out.

Well, like every Bound for Glory event before it, the main event is set aside for the Heavyweight Championship match. You have to admire a company that, irrespective of who they have on the roster at the time, always lets their biggest event of the year be closed out by their biggest title being put on the line. It’s a good way to put some weight and value behind the championship, and with champion Austin Aries defending against Jeff Hardy, you were virtually guaranteed a stand-out match. With all the other TNA titles up for grabs on the card, plus two very personal grudge matches in the shape of Roode versus Storm and Aces & Eights versus Sting and Bully Ray, the event promised to be a suitably strong pay-off for a number of long running feuds. Roode and Storm delivered an incredible, bloody and boundary-pushing no DQ match, which is gloriously uncensored on this 15 certificate DVD release, whilst the unmasking of a key member of Aces & Eights provided a nice twist in the ongoing TNA versus biker gang angle. 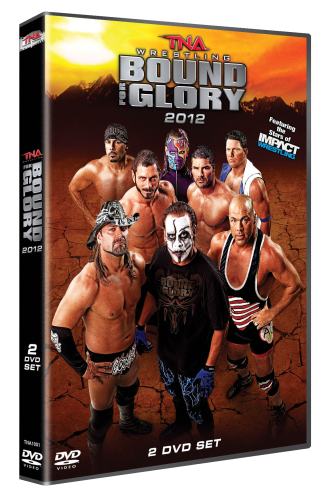 Opening up the show is a great TNA X-Division Championship match with young Champion Zena Ion putting his title on the line against Rob Van Dam. Some great high-flying spots from both men in this match, with Zena pulling off a fantastic somersault plancha from the ring to the outside, where he levels Van Dam, lands perfectly on his feet and starts working the crowd whist standing on the guardrail. Nice. The end comes with the classic combo of Rolling Thunder and the Five Star Frog Splash to put the strap on Rob Van Dam. Great, high-octane opener.

Next, Samoa Joe successfully defends his TV title against the UK’s own Magnus. The two big men put on a great display of chain wrestling at the outset, and followed with a series of hard-hitting moves and counters. Magnus shows some great tenacity to reverse several of Joe’s attempts to slap on his rear naked choke, but the end comes when the Samoan Submission Machine managed to reverse a figure four attempt by Magnus, slap on the choke and force the Brit to tap out. Good, strong work by both these big men.

Not for the weak of heart next is the Street Fight Match between Bobby Roode and James Storm, with MMA fighter Muhammed “King Mo” Lawal as special guest enforcer. Here’s what you need to know: kendo sticks, chairs, tables, trash cans, a DDT to the steel walkway, hundreds of thumbtacks, two of the grisliest crimson masks you’ll ever see, one smashed beer bottle, two jaw-breaking superkicks and a hugely satisfying end to a year long feud. Easily as brutal and bloody as the best you’d find in the ECW archives. “This is awesome,” chanted the crowd. Yes, yes it was.

How’d you follow two men painting the ring with one another’s blood? With a rookie wrestler with a sleaze angle and a TNA exec who used to talk to a Styrofoam head of course. Joey Ryan picks up the win over a “you still got it” worthy Al Snow after Matt Morgan interfered. Most notable moment of the match see’s Snow going under the ring and getting Head, which got a decent pop from the crowd. And for wrestling fans who don’t know Snow’s history, I’m fine leaving them to completely misunderstand that last sentence.

The Three Way Tag Team Championship match saw all six men getting their moment to shine. Biggest spot for the highlight reel goes to Kazarian landing a fantastic top turnbuckle hurricanrana on Hernadez, taking both men to the floor, but landing with an absolutely sick bump that should have resulted in at least a dislocated shoulder for one half of the Tag Team Champions. AJ and Christopher Daniels are always good together, with Styles in particular selling each move perfectly. Angle still delivers those German suplexes better than anyone in the business, Hernandez can fly like a luchadore when he wants to, and the TNA crowd deserve special credit for starting an “appletini” chant. The end comes when Hernandez absolutely launches Daniel’s into the air with his Border Toss finisher, leaving Chavo free to echo Eddie and deliver a lovely frog splash from the corner. Three seconds later, we have new tag team champs.

The Knockout Title match went six minutes, but was really just the set up for the introduction of Tara’s boyfriend – “Hollywood’s biggest star”, Jessie from the US version of Big Brother. No idea why he’s got celebrity status, and out of principle won’t Google it to find out. Found myself not caring, and neither did most of the crowd, who greeted him with the biggest non-reaction since the WWF unveiled the Gobbledy Gooker at the 1990 Survivor Series. Faces get cheers. Good heels get boos. Bad ideas get… nothing. Moving on.

Bully Ray and Sting versus the Disciples of Apocalypse – oops, sorry, versus the Aces & Eights moved the invasion angle that isn’t at all like the N.W.O. or DOA on further in this messy but fun no DQ tag match. Nice moments included Sting and Bully paying homage to the Road Warriors by landing a nice top rope clothesline and of course the big reveal of Bully’s brother Devon being one of the masked biker gang members. Hogan and Bully ham it up like pro’s, with Hogan in particular recoiling into the corner as if he’d just seen Jessie’s earlier TNA introduction again. “It was me!” exclaims Devon, just to make sure we get that it was, you know, him. Watching it back now after catching TNA’s recent live Manchester show really does flag up how the Sting Bully tag match there was almost move for move the exact same contest as the one here.

To close the show is the Bound For Glory tournament winner Jeff Hardy cashing in his title match against champ Austin “Real Men Wear Capes” Aries. Hardy comes out wearing that odd, part Jushin Thunder Liger / part Power Ranger villain mask. I mention this only because it reminded me of Big Van Vader’s awesome smoke breathing mask / shoulderpad thing. He should have brought that back for his recent WWE return. Anyway, back to the match: a real split crowd on this one, with equally vocal fans for both men. Hardy landed his usual high flying moves, but the spot of the match has to be Aries delivering a stunning hurricanrana as both men were standing up on the top corner. Fantastic, fantastic move. Less fantastic and more scary was a potentially lethal neckbreaker that saw Hardy draped between the ropes and Aries landing a sickening neckbreaker, bringing Hardy’s head smacking down on the 2 inch high lip of the steel entrance walkway which didn’t quite meet the ring apron (what part of that did the ring crew think was a good idea? “Yeah, people might trip on it or, ya know, crack their head on it, but it’s fine!”). Could have been very nasty. The strong ending came when Hardy bounced back from a stunning brainbuster with a Twist of Fate and Swanton Bomb combo. 1, 2, 3 – new World Heavyweight Champion.

With disc two devoted to the extras, you get the usual mix of “watch them once” segments like the behind-the-scenes TNA Fan Interaction mini-feature, post-match analysis and music videos. This is thankfully balanced out by some genuinely weighty material too, most notably in the shape of the 30 minute Before The Bell: Bound For Glory documentary and the entirety of Sting’s TNA Hall of Fame induction.

As the big event of the year on the TNA calendar, you’d expect Bound For Glory to feel appropriately epic. They’ve certainly focused on the history of the pay-per-view here, with the vignettes and special features paying homage to some of the more stand-out moments from the eight annual Bound For Glory shows. The announce team do a good job referencing the history of the event throughout and selling the importance of the night to TNA. Much of the card had a suitably big-game feeling, with only the Knockouts match and Snow / Ryan match feeling out of place. The sheer gutsiness of the Storm / Roode bloodbath is worth the coverprice alone. Throw in some real wrestling masterclasses and a vocal hot crowd and you’ve got a very worthy addition to your wrestling library.

Armchair Bookers Club Rating: 8 out of 10