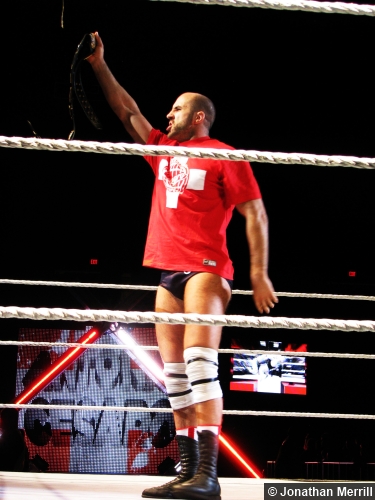 Out for the Count.

The seventeenth edition of WWE Main Event came to you from the Sleep Train Arena in Sacramento, CA. Before they are two of the 30 participants in the Royal Rumble Match this Sunday, two of the WWE’s most promising stars would go head-to-head as “The Sin City Cyborg” Ryback goes one-on-one with United States Champion Antonio Cesaro in a non-title match.

After a special look at the Royal Rumble Match, it was time for the featured bout on WWE Main Event as “The Sin City Cyborg” Ryback went one-on-one with United States Champion Antonio Cesaro in a non-title match. During the match, Ryback tosses Antonio Cesaro to the outside and Cesaro was looking to take the count-out loss, but The Miz would get up from his seat on commentary and, behind the back of the referee, The Miz would roll the United States Champion back into the ring! A little bit later on in the match, Ryback would take Cesaro down with the Meat Hook Clothesline, but the United States Champion would quickly roll out of the ring, walking out on the match and taking a count-out loss to Ryback.

Four nights before they challenge Team Hell No for the WWE Tag Team Titles at the Royal Rumble, Team Rhodes Scholars would face Jimmy & Jey Uso in tag team action on Main Event. In the end, Team Rhodes Scholars would narrowly avoid defeat as, with Jey Uso on the top rope, Cody Rhodes would pull Jimmy Uso out of the ring, allowing Damien Sandow to rack Jey Uso up on the top rope, pulling Jey down and pinning him to pick up the win.