As the end of the world approaches (it could happen), what better way to distract yourself from the impending doom (or as normal people call it “Christmas”) by watching WWE’s weapon-laden, “wood” referencing, brawl fest, TLC. That’s right folks, Tables. Ladders. Chairs. The Shield. Team Hell No. Ryback. Lot’s of other stuff. And for God’s sake, please, PLEASE, pleeeeeaaase let Dolph win. That’s all I want for Christmas… 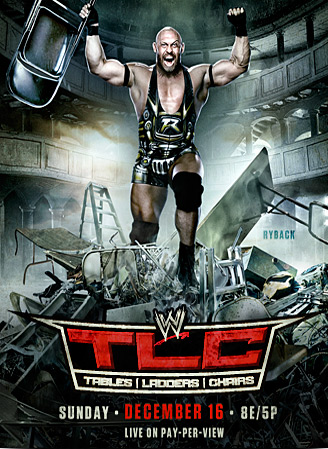 A Punk-less PPV? Bear with me one second, I’m just trying to deal with this. It’s fairly traumatic. I mean sure there’s the greatness personified that is Daniel Bryan, but still, no Punk makes dsrchris a nervous PPV watcher. Add the lack of Punk to the very real prospect of Dolph losing his briefcase, and…well…I’m not having good feelings about that match in general. Let’s just get on with looking at the rest of the card. I’m just gonna keep telling myself that Dolph’s gonna be fine, and we’ll get through this together.

No AJ? So she’s getting involved somewhere later in the show then? I hate it when they switch something about a match earlier down the card that pretty much gives away something that’s due to happen later in the night. Ah well, it’s only the pre-show, it’s not as if anyone is really gonna be watching…

So who’s your pick for this one? I think we can instantly say that the Funkadactyls, Aksana, Rosa, and probably Alicia Fox aren’t winning. Natty’s probably not winning either. So it looks like our new number one contender is gonna be Layla, Kaitlyn, or Tamina. If Tamina didn’t stink the place up so bad, then I’d be pretty sure it’d be her, but as it stands she is stinking the place up with her performances (they’re not bad, she doesn’t seem to know how to put things together in the ring) so I’m guessing at a Kaitlyn or Layla victory.

Who I want to win: Hmmmm. Kaitlyn or Layla I guess. If only because it gives Eve another chance to cop another feel on whoever she defeats next. Bow chikka wow wow.

Who I think will win: I dunno. Could be Kaitlyn, could be Layla, could even be Tamina. Heck, hopefully Nattie’s got an outside chance. To be honest though, I’m not that bothered.

Yay! Cody’s back, and he’s got a super sexual moustache!! Seriously though, I LOVE Team Rhodes Scholars. It’s one of those great moments (much like the creation of Beer Money) where two random guys gets stuck in a team together, and contrary to popular belief, they actually form a great team that works really well together.

Then on the other side of the fence you’ve got Rey and Sin Cara. A team that should work really well together on paper, but for some reason don’t seem to quite click properly in real life. I guess it just goes to show, you never know what’s gonna happen in the crazy world of Tag Teams.

So who should become number one contender to the Tag Team Champions? That’s an easy question in my mind. Team Rhodes Scholars all the way. I’d love for WWE to give Cody & Sandow a feud with Team Hell No. That just seems to me like it’d be absolutely chock full of win from all angles. Imagine the potential promo work, the possibility of some great, great matches, it genuinely gets me excited at the prospect.

So yeah, sorry Rey and Cara, but truth be told you bore me. A lot. And I don’t want to be bored, I want to be entertained.

Who I want to win: Rhodes Scholars. All day every day.

Who I think will win: Rhodes Scholars. That’s the only logical choice if WWE want to keep Hell No as some semblance of a face team.

So…who else watched Cesaro boss it on Raw during the fatal four-way match? How awesome did he look? Didn’t I tell you this guy is the future?! R Truth don’t stand a chance in this match. Like I said last month, Cesaro is the perfect fit for US Champion right now. At least until an all American hero steps up to challenge him in a proper feud.

As much as I love Truth, and as much as I love to hear his crazy a*s promos (he’ll kick your cat) there is nobody…and I mean NOBODY, who should even think about taking the title off Cesaro for the foreseeable future. It’s that simple really. There’s not much to predict or preview here. Cesaro is awesome. So is Truth, just not as awesome or effective a champion as Cesaro is growing into. And that’s all I’ve got to say about that.

Who I want to win: Cesaro. Any other answer is pure madness.

Who I think will win: Antonio Cesaro. And hopefully look damn good doing it.

Oh WWE, are you gonna pull the trigger on Kofi or not? He’s upheld his end of the bargain. He got himself new gear, a new more aggressive attitude, he even started calling himself the Wildcat (suck on that Braden Walker). And still WWE refuse to push him effectively. Instead they’ve spent the last two months having Kofi getting the living snot pounded out of him by all comers, and just clawing by on a series of what are essentially flukey wins. Way to make the IC Champion look good…

Hopefully they’re planning on using this match as an opportunity to finally have Kofi put in a strong champion’s defence, but I doubt it somehow. The funny thing is they could probably afford to put Kofi over Wade pretty strongly at this point, as it’s not as if they’re getting fully behind Barrett recently either.

I can’t help but get the feeling that this match is just two guys facing off who deserve to be treated and booked a lot better than they currently are. Here’s hoping that they both get together to put in the kind of match that the WWE bigwigs simply can’t ignore.

Who I want to win: Kofi. He deserves a good run with the IC title, but they need to stop jobbing him out and making him look weak.

Who I think will win: Probably Kofi, but I can’t shake the feeling that it’s gonna be through some kind of lucky win.

Oh God…I’m officially worried. There’s a very good chance that Cena could win this. I mean, I hope I’m wrong, I really do, but a Cena win just wouldn’t surprise me. Which is gutting, because Dolph has really upped his game recently, and stopped being typical briefcase holding job fodder.

In fact the only thing that’s keeping me sane ahead of this match is the memory of what Daniel Bryan did last year at this very same PPV. We got a cash in last year, so could we possibly get another one this year?

What I’d really like to see happen is Dolph beat Cena clean, but we all know if Cena’s being beat then it’s probably through some kind of shenanigans relating to either Vickie or AJ. All I want to see is Dolph superkick the face off Cena. Is that too much to ask?!

Who I want to win: Ziggler. Dolph is going places, and a big win over Cena could help cement him as the one to watch in 2013.

Who I think will win: Ziggler. I have to keep the faith. We can’t have a show with Punk where Cena becomes the new MitB briefcase holder. Can we?

Ooooh, another Sheamus/Show match? Awesome. Loved the last two matches between these two, and I can’t wait to see what they get up to this time. Again, there’s not much to say here that I haven’t already said about their previous matches. Just two big guys waiting to unleash all kinds of hell upon each other, this time with chairs!

The main intriguing point this time round is the possibility of history repeating itself from last year. We all remember Big Show’s 45 second reign last year, and how that was brought to a crashing halt by D Bryan and his briefcase. Could the same thing happen again this year?

So yeah, not much left to say. Can’t wait to see these guys lay each other out, and don’t be surprised if you see a briefcase get cashed in at some point during the evening.

Who I want to win: Sheamus. The big fella is due some retribution, and I think tonight could be when he finally gets his payback.

Who I think will win: Sheamus. But expect shenanigans to ensue as this match heads towards it’s end.

6-Man TLC Match
The Shield vs. Team Hell No & Ryback

Dean Ambrose on my TV?! In a PPV main event?! YES! YES! YES! Seriously though, I’ve really enjoyed the Shield since they first appeared. Obviously Ambrose is the one to watch for me, and if you ask me he’s already shown himself to be the best member of the group (if only for the “nope” moment).

So with Punk out Ryback instead has to join forces with Kane and D Bryan to take on the maniacal Shield. Which in my book isn’t necessarily a bad thing. To be honest I could quite happily have done without another Punk/Ryback championship match, so really this has worked out well for everyone involved.

What I really like about this is that finally something has happened to put Kane and Bryan on the same page. With all their falling outs and arguments we knew it’d take something a bit special to finally get them to co-operate, so thank the Shield for making the Tag Team champions into a more cohesive unit.

Unfortunately I can’t see the Shield getting the win here. Well not unless they decide to unveil new members of the Shield to help out the original trio (which could be pretty cool)? I can’t see WWE being prepared to let Ryback take another loss, especially when this isn’t the WWE Champion we’re talking about here.

Which is a real shame, because what better way to make the Shield seem like a legitimate threat than to have them defeat Ryback AND the Tag Team Champions? That’d work pretty damn well in my book. If you want the Shield to have legs, and not just fade out like the Nexus, then you can’t repeat the same mistakes. The Shield should win here, and win big. Make them into a threat to allow that to in turn elevate whoever they fight against next.

Who I want to win: The Shield. These guys need to become something for the WWE Universe to fear, and defeating Ryback and the Tag Champs would go a long way to helping this.

Who I think will win: Probably Ryback. He’s the big thing at the moment, so WWE being their usual self I imagine they’ll try to ram him down our throat. Because that worked so well for Cena.

So yeah, that’s my preview. Sorry it’s only a short one, but I’m currently full of man flu and trying to stop my sinuses from exploding. I’m sure you can all fill in the gaps for me by leaving some lovely comments in the box below this article?

So until next time, enjoy tonight, and MERRY CHRISTMAS!!