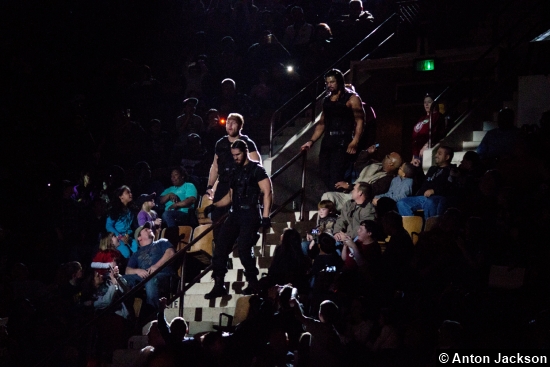 Survival of the Fortunate.

The 26th annual WWE Survivor Series kicks off with a Traditional 5-on-5 Survivor Series Elimination Tag Match as Rey Mysterio, Sin Cara, Tyson Kidd, Justin Gabriel, & “The Funkasaurus” Brodus Clay faced the team of The Prime Time Players, Primo, Epico, & Tensai. After a cavalcade of high-flying maneuvers from Team Mysterio, the two super heavyweights of the match would square off as Tensai and Brodus Clay collided with one another, which led to Tensai putting Brodus Clay away for the first elimination, leaving Team Mysterio at a big disadvantage. However, Team Mysterio would quickly recoup the loss of “The Funkasaurus” as Justin Gabriel would score an upset pinfall over Tensai, eliminating the destructive Superstar from the match, but Tensai would leave his mark on the match, assaulting Gabriel before storming out of the ring! Later on in the match, Tyson Kidd would further cripple the opposition by catching Titus O’Neil with a roll-up, taking the self-proclaimed “Big Deal” out of the match. Tyson Kidd would continue to prove his worth to Team Mysterio by making Epico tap out to the Sharpshooter, leaving only Primo and Darren Young on the opposing team. However, that would all change in an instant once team captain Rey Mysterio was tagged into the match as “The Master of the 619” would catch Primo with a roll-up to eliminate the former tag team champion before polishing off an impressive match by dropping Darren Young with the 619 and Bullet Splash combination, ensuring victory for Team Mysterio with Rey Mysterio, Sin Cara, Tyson Kidd, & Justin Gabriel remaining as the survivors!

Backstage, Kaitlyn was preparing for her Divas Title match against Eve when the #1 Contender is blind-sided by a mystery assailant in a blonde wig! However, unlike Night of Champions, Kaitlyn is able to fight back against her attacker, ripping the blonde wig off to reveal that none other than Aksana was the disguised Diva!

Moments after fending off an attack by Aksana backstage, a fired-up Kaitlyn would march to the ring with blonde wig in hand to challenge Eve for the Divas Championship. Kaitlyn would try her best to unseat Eve, but in the end, it was Eve hitting the swinging neckbreaker on Kaitlyn en route to successfully retaining the Divas Title.

With more allegations and more ‘evidence’ being revealed on a weekly basis by RAW Managing Supervisor Vickie Guerrero about a recent affair between her and John Cena, AJ Lee appeared on Survivor Series with some ‘evidence’ of her own! The former General Manager says that Vickie is fabricating an affair between her and John Cena to hide the fact that Vickie herself is having an affair of her own! Vickie then storms to the ring, demanding answers from AJ and the ex-GM decides to have some fun at Vickie’s expense, showing outrageous photos of Vickie enjoying a burrito with Ricardo Rodriguez, having a “slobberknocker” with Hall of Famer Jim Ross, and even getting down with Brodus Clay in a local hotel room. However, the laughs would soon turn to confusion as, amidst the back-and-forth between AJ and Vickie, Tamina Snuka comes out of nowhere, attacking AJ Lee with a Samoan Drop and flattening the Diva with the Superfly Splash! After Tamina made her exit, Vickie would laugh in the face of AJ. Has Vickie found a way to see AJ get punished without having to risk her job?

In a rematch from Hell in a Cell that has become much more personal over recent weeks, the World Heavyweight Championship was on the line at Survivor Series as “The World’s Largest Athlete” Big Show defended the prestigious title against the former champion, “The Celtic Warrior” Sheamus. In an all-out war for SmackDown’s top prize, both champion and challenger would put everything on the line to try and secure the championship, but after realizing that his reign as World Heavyweight Champion was in serious jeopardy, Big Show decided to try and take the easy way out as, when Sheamus would size Big Show up for the Brogue Kick, Big Show would grab senior referee Scott Armstrong, pulling the referee into the path of the Brogue Kick, leaving the referee completely knocked out! Realizing what he had just done, Sheamus immediately forgets about the match and tends to the downed referee as “The Celtic Warrior” is quickly joined by referees and EMT’s in checking on the official. However, where Sheamus and most others saw an unfortunate situation, Big Show saw opportunity as the World Heavyweight Champion would deliver the K.O. Punch to Sheamus and would go for the cover on “The Celtic Warrior”. Upon seeing the attempted pinfall, one referee would briefly turn his attention away from his injured colleague to quickly count Sheamus’ shoulders to the mat, ensuring that Big Show’s plan had succeeded. However, a more seasoned referee saw the erroneous call and reversed the decision, awarding the victory to Sheamus via disqualification! This outraged Big Show, who, while he was still the champion, evidently wanted a decisive pinfall victory over Sheamus. Amidst Big Show’s argument with the referee, however, a livid Sheamus would grab a steel chair, driving it into the spine of the World Heavyweight Champion! The short-tempered Irishman would continue to deliver countless chair shots to the champion, despite Big Show actually begging Sheamus to stop the onslaught. The groveling eventually seemed to work, though, as Sheamus would drop the steel chair, only to turn around and turn the champion’s lights out with a vicious Brogue Kick!

Then it was time for the much-anticipated Traditional 5-on-5 Survivor Series Elimination Tag Match between Team Ziggler and Team Foley as “Mr. Money-in-the-Bank” Dolph Ziggler would lead “The Bareknuckle Brawler” Wade Barrett, “The Intellectual Savior of the Masses” Damien Sandow, the Harvard Law graduate David Otunga (who was replacing the injured Cody Rhodes), and “The Mexican Aristocrat” Alberto Del Rio as Team Ziggler would face Team Foley, which consisted of “The Awesome One” The Miz, Intercontinental Champion Kofi Kingston, WWE Tag Team Champions Team Hell No, and “The Viper” Randy Orton, with team captain Mick Foley in their corner. Kane would score the first elimination for Team Foley as “The Big Red Machine” would drill Damien Sandow with a chokeslam en route to sending “The Duke of Decency” packing. However, it was not long after this that Team Hell No would cost Team Foley dearly as an intense argument between Kane and Daniel Bryan led to Kane actually tossing his fellow WWE Tag Team Champion out of the ring and, with Kane’s back turned, Dolph Ziggler was able to catch the monster off-guard with the Zig Zag, pinning “The Big Red Monster” to eliminate him from the match and evening the odds for Team Ziggler! Team Foley would quickly regain their focus as Daniel Bryan would lock David Otunga in the No Lock, forcing the Harvard Law graduate to tap out to send Otunga packing. Team Ziggler would then take two major players away from Team Foley as Wade Barrett would level Kofi Kingston with the Bull Hammer, ensuring the Intercontinental Champion’s elimination from the match and, moments later, Alberto Del Rio would lock in the cross armbreaker on Daniel Bryan, leaving the WWE Tag Team Champion no choice but to tap out!

After his teammates refused to tag him into the match, The Miz would get the long-awaited tag and would make his first appearance in the match and “The Awesome One” would prove his worth by planting Wade Barrett with the Skull Crushing Finale to send “The Bareknuckle Brawler” out of the match. The Miz’s momentum would be brought to a halt by Alberto Del Rio, however, as “The Mexican Aristocrat” scored with the step-up enziguiri on Miz en route to eliminating the former WWE Champion, leaving Randy Orton alone to represent Team Foley against Alberto Del Rio and Dolph Ziggler. Orton would take it to both Ziggler and Del Rio and, at one point, Del Rio’s personal ring announcer, Ricardo Rodriguez, would try to get involved, but Mick Foley would rely on an old friend that resides in his sweat pants to thwart the distraction as Foley would stuff Mr. Socko into the gullet of Rodriguez, taking Ricardo out of the equation! Back in the ring, Randy Orton continued to fight for the survival of Team Foley as “The Viper” was able to catch Del Rio with the RKO en route to eliminating his rival, leaving only Randy Orton and Dolph Ziggler to go to war for the title of sole survivor. “The Viper” would take it to “Mr. Money-in-the-Bank” and, after planting Dolph with his signature hanging DDT, Orton looked ready to put the icing on the cake with an RKO to Ziggler. However, the ever sinister and unpredictable Orton wanted to do more than simply win the match as “The Viper” would size Ziggler up for the punt to the skull, but, in a surprising turn of events, Orton was setting himself up as, when Orton got close enough, Ziggler popped up, surprising “The Viper” with a super kick! Dolph then covers Orton and scores a major upset to win the match and stand alone as the sole survivor of his team!

Then it was time for the huge main event as, just one day shy of being the WWE Champion for a full calendar year, CM Punk would defend the WWE Championship against two of the most dominant and intense competitors in the WWE today in “The Sin City Cyborg” Ryback and the ten-time former WWE Champion John Cena as the three men would go to war in a Triple Threat Match for the most prestigious championship. After all three men would jockey for position in the every-man-for-himself environment, an unlikely alliance would briefly be formed as, with both men realizing what it would take to slow Ryback down, CM Punk and John Cena would actually co-exist to neutralize a major threat as the rivals would dismantle the announce table before joining forces to deliver a vicious suplex to “The Sin City Cyborg” through the table! With Ryback temporarily taken out of the equation, CM Punk and John Cena would resume their year-long rivalry with both men going blow-for-blow with Cena hitting the Attitude Adjustment and Punk hitting the GTS, but neither man would be put down for the three-count. However, Ryback would soon hit the ring with the force of a tank as “The Sin City Cyborg” would annihilate both of his opponents, dropping both John Cena and CM Punk with Shell Shocked. Just when it looked like Ryback would wrench the WWE Title away from CM Punk, three assailants disguised as security guards would hit the ring, scratching, clawing, and pummeling “The Sin City Cyborg” like wild animals, taking Ryback to the outside and driving Ryback through the Spanish announce table with a thunderous three-on-one powerbomb! Meanwhile, in the ring, CM Punk would crawl for the cover on John Cena, pinning Cena to survive the Triple Threat Match and ensuring that he would remain the WWE Champion for one full year! The three mysterious assailants would later be identified as NXT developmental talents Seth Rollins, Dean Ambrose, & Roman Reigns, but why did these three NXT standouts target Ryback for their abrupt debut? Are these three men some sort of hired protection for WWE Champion CM Punk?