From 1988 to the present day, Summerslam has been at the heart of WWE’s pay-per-view output and is arguably the third-biggest show of the year behind WrestleMania and the Royal Rumble.

In the very first event, the titanic tag-team match pitting The Mega Bucks (DiBiase & Andre) against The Mega Powers (Hogan & Savage) captured the hearts and minds of all who witnessed it. Fast forward twenty-three years, through Bret, Shawn, Austin, Rock, Undertaker, Van Dam, The Hardys, E&C, The Dudleys and a many more show-stealing acts, including last year’s mega-story of “The Summer of Punk”, we find ourselves in the midst of what was one of the longest reigns in the last decade as the man himself, CM Punk, continues to build on what he began almost exactly one year previously.

Summer of Punk II was upon us, but the blue skies of Summer were about to be clouded over by the arrival of an F5 as the Perfect Storm crashed into Los Angeles… 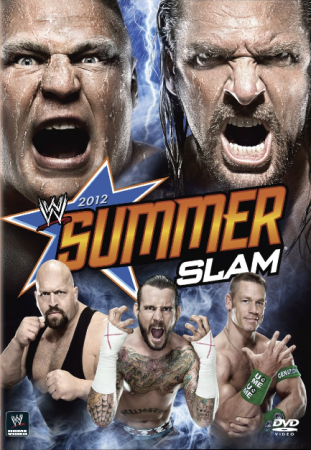 It finally happened. In the build up to Summerslam 2012, former multi-time WWE Champion John Cena won the Money in the Bank Match, cashed in his briefcase… and DIDN’T WIN THE TITLE. Sure, this was because of Show’s interference causing a DQ, but it did lead to a run in from The Rock and a heel turn from CM Punk, so the greater good was served overall.

This led, via RAW GM AJ Lee, to the Triple Threat Match on this disc, but before we get to that, you get to enjoy a stellar one-on-one match between Chris Jericho and Dolph Ziggler in the former’s last WWE PPV match (at least until he comes back… again). The two of them put forth a great effort, with the finish being wincingly effective in the right ways, although the result, especially due to Dolph winning MiTB AND Jericho leaving the next night should have gone the other way.

The good work from the opener continued as the best comedy storyline WWE has done since “Crazy” R-Truth or Santino / Santina evolved some more. Kane, who deserves to go into the HoF purely on the fact he’s made a gimmick that was only meant to be around for some six months last FIFTEEN YEARS and not ever really get too stale, and Daniel Bryan’s work in the Anger Management skits has been phenomenal and they put on a match to equal it here. Not too long to overstay its welcome, especially as the match wasn’t as important as a match, more a catalyst to continue the angle. Right result this time too.

The first of four title matches in a row is third on the card as Miz, fresh from his sojourn to Hollywood, returned at Money in the Bank 2012 and winning the Intercontinental Championship eight days later, defended his title against Rey Mysterio.  Full of fast action and neat counters (slingshot powerbomb says hello), the match breezes past and the finish was a nice piece of business to bring matters to a close.

Sheamus, who has had a stellar year going back to winning the Royal Rumble and then the World Heavyweight Championship at WrestleMania, continued his glory run with another stiff outing against the resurgent Alberto Del Rio. It’s unfortunate that the Mexican hasn’t had the chance to truly run with the ball yet as he has all the tools to do so, but bigger angles seem to take the reins and stifle his chances.

Again, this was a great match with great action between two opponents who know each other very well. It’s just my opinion that the wrong guy won, although I realise that is not an opinion the majority will share.

Missed opportunity time was up next as R-Truth and Kofi Kingston defended their WWE Tag Team Championships against The Prime Time Players. Darren Young and Titus O’Neil deserve credit for breaking away from the NXT / Nexus / Jobber roles they had previously and being convincing as a tag-team WWE can pin their future hopes for the division on.

Unfortunately, it wasn’t to be on this night, but this was a fun tag match and a run with the gold cannot be too far away for the new boys.

The penultimate match on the card and the last title match was the Triple Threat between CM Punk (who had held the belt for around nine months at this point) against John Cena and Big Show. The champion wasn’t happy going into the bout, feeling it was a conspiracy against him and that his run as champion hadn’t been given the proper respect.

Big Show was also a guy who felt he wasn’t getting the proper respect and went into this match to prove his dominance… and that’s what he did. Most of the match was Show beating down on his two opponents or his two opponents working together (not always intentionally) to take down the giant. Memorable spots were aplenty, but the three corner knee strikes from Punk stood out, as did the Cena legdrop to the back of Show’s head when the big guy blocked the bulldog that was meant to follow said three knees. The finish was also great as it kept all three guys strong in their respective ways and advanced the main storyline of Punk’s title run.

Every show need a piss-break and after the great WWE Championship match, we get our turn as WWE doesn’t learn the lesson from WrestleMania and “treats” the fans to another musical interlude. This time it’s Kevin Rudolph singing the Summerslam theme song… and it absolutely sucks the big one. I swear to God, it truly is abysmal and the fact that this takes up the traditional Diva slot on the PPV tells its own story. At least if you don’t like the Divas as wrestlers, they’re generally easy on the eyes, but this was an abomination, the afterbirth of an aborted disaster and should have been scrubbed from the DVD release so WWE can pretend it never happened.

Thankfully, business picks back up with the main event as Brock Lesnar’s second match of his one year deal sees him take on Triple H, with the build of this match seeing collateral damage in the shape of HBK’s broken arm.

The match itself is not a patch on the Brock v Cena match, but that’s not a knock on this one so much as praise for the John Cena outing. That being said, the amount of Kimura attempts really drag this match down as the hold was built very well as an instant match winner, but Hunter escaping it FIVE TIMES during the bout really was a bit egotistical from Vince’s son-in-law.

Despite that, both men clubbed the crap out of each other, with little touches (Brock removing his MMA gloves, the work on the stomach to play of the real issues Brock had with diverticulitis) adding to the festivities until the no-sell on a third Pedigree leads to the match-winning (and arm-breaking) submission win for the monster.

A downbeat end to the show, but sometimes its good for the bad guy to walk away the victor.

The only extra on the DVD is a short interview with Alberto Del Rio backstage and it’s as you’d expect it to be.

A show that was built around one match and all of the undercard delivered to a degree. The matches themselves were all good-to-great, but nothing was really achieved going forward in regards to any significant changes. The event (outside the Brock / HHH main-event) could’ve been cancelled and not one storyline would’ve been affected, which for one of the original Big Four PPVs, is a definite no-no.

Dolph v Jericho, Rey v Miz and Triple H v Brock are your main reasons for buying this show along with the sterling work in the WWE Championship Match, but none of the matches drag the event down AND as it’s on DVD, you can skip the Kevin Rudolph performance too.

As with most WWE PPV DVDs, this is worth buying if you can find it for around £10 or you wish to have a complete collection.