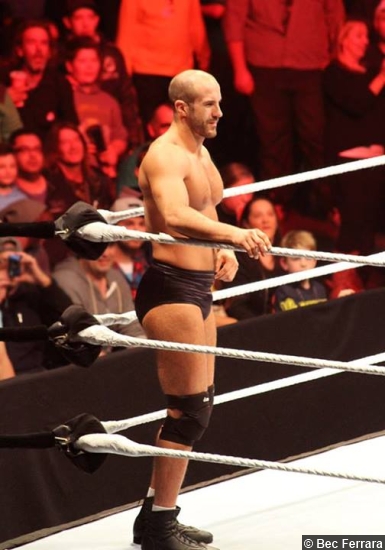 The ninth edition of WWE Main Event came to you from the CenturyLink Center in Bossier City, LA. After getting a measure of revenge against Dolph Ziggler on RAW by defeating “Mr. Money-in-the-Bank”, ten-time former WWE Champion John Cena would make his Main Event debut as Cena would go one-on-one with the self-proclaimed “Intellectual Savior of the Masses” Damien Sandow!

After a brief look at the careers of both men, it was time for the main attraction of WWE Main Event as ten-time former WWE Champion John Cena would be in action on Main Event, going one-on-one with “The Intellectual Savior of the Masses” Damien Sandow. After giving John Cena all that he could dish out, it would all be for naught as the ever resilient John Cena would come out of nowhere, locking in the STF on Damien Sandow, who immediately taps out as Cena picks up the win!

The United States Champion was in action on Main Event as Antonio Cesaro went one-on-one with Zack Ryder in a non-title match. In the end, it was Antonio Cesaro planting Zack Ryder with the Neutralizer en route to picking up another impressive win. After the match, Antonio Cesaro states that Zack Ryder represents everything that is “wrong” with America, saying that he is “disgusted” with all of them and he hates coming to that part of the country. Cesaro continues that, even though he is the champion of an “inferior” country, he is a “superior champion”, saying that he is the “greatest champion in WWE”! One man who takes issue with this proclamation is reigning Intercontinental Champion Kofi Kingston, who says that Cesaro is not the greatest champion in the WWE, before revealing that, on next week’s Main Event, it will be Champion vs. Champion as Kofi goes one-on-one with Cesaro!