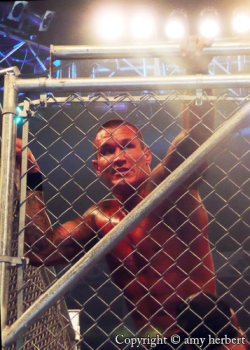 Sixteen nights before Hell in a Cell, the 686th edition of WWE Friday Night SmackDown came to you from the HP Pavilion at San Jose in San Jose, CA. For the first time since being assaulted by Alberto Del Rio two weeks ago, Randy Orton returns to SmackDown as “The Viper” will no doubt be looking for revenge. After the brash Superstar actually challenged Kane to a match via a Tout, “Mr. Money-in-the-Bank” Dolph Ziggler would go one-on-one with one-half of the WWE Tag Team Champions and the man who pinned Dolph on RAW, “The Big Red Monster” Kane!

The show kicks off with SmackDown General Manager Booker T as the GM presents a unique contest between World Heavyweight Champion Sheamus and “The World’s Largest Athlete” Big Show would take part in a K.O. Punch vs. Brogue Kick Contest! Booker first introduces the #1 Contender for the World Heavyweight Title, “The World’s Largest Athlete” Big Show, followed by the introduction of the World Heavyweight Champion, Sheamus. Booker tells both men that the contest is not about their match at Hell in a Cell, suggesting that the champion and challenger take their aggression out on the measuring instruments with their respective finishers. Big Show is outraged at the contest, snatching the microphone from the GM, saying that he has knocked out every Superstar on the roster and he will not play games. Sheamus interrupts, saying that he will take a “crack” at it, using his Brogue Kick to score 1,322 pounds per square inch. Big Show then reluctantly takes his turn, but changes his mind, claiming that, if he hits the ball, then the machine will “blow up”. Big Show continues to protest, saying that Booker and Sheamus are trying to make him look like a “fool”. Sheamus then continues to taunt Big Show, asking if the giant is afraid of being “embarrassed” by him, saying that it could not be more embarrassing than Big Show’s 45 second reign as World Heavyweight Champion and that their conversation right now has lasted longer than his last title reign. This riles the giant up enough to pummel the machine, scoring 1,809 pounds per square inch, winning the contest! Big Show then storms to the back as Sheamus says that Big Show’s punch was impressive, but that it was on an inanimate object. However, the World Heavyweight Champion is then clobbered from behind by Tensai as Tensai knocks Sheamus down on the steel ramp! Booker T then restrains Tensai, asking the large Superstar what he thinks he is doing.

Per the orders of SmackDown General Manager Booker T, the opening match of the night saw World Heavyweight Champion Sheamus go one-on-one with Tensai. However, the match would not get underway as Sheamus meets Tensai on the outside of the ring as the two super heavyweights brawl before finally getting in the ring, allowing the non-title match to begin. In the end, it was Sheamus blasting Tensai with the Brogue Kick en route to picking up the win.

Backstage, Alberto Del Rio tells his personal ring announcer, Ricardo Rodriguez, to go out and find Randy Orton. The nervous ring announcer searches backstage, getting scared witless by Santino Marella, who hisses at Rodriguez before warning Rodriguez about the deadliness of “The Viper”.

In a match that was actually requested by Dolph Ziggler, “Mr. Money-in-the-Bank” Dolph Ziggler, with Vickie Guerrero in his corner, went one-on-one with one-half of the WWE Tag Team Champions, “The Big Red Monster” Kane! During the match, Vickie Guerrero would get on the apron, distracting Kane long enough for Dolph Ziggler to grab the Money-in-the-Bank briefcase, driving it into the mid-section of Kane, resulting in the disqualification. After the match, Kane fights back against Ziggler, dropping Dolph with a right hand before Kane’s tag team partner, Daniel Bryan, rushes out, claiming that he “saved” Kane from Dolph Ziggler. This sparks an argument between the WWE Tag Team Champions, but Matt Striker interviews Team Hell No, asking them if their anger issues will result in them losing the tag titles at Hell in a Cell and even asking Bryan how he feels about being the “weak link” of the team. Bryan responds by locking in the No Lock on Matt Striker! However, Kane pulls Bryan off of the interviewer, but ends up chokeslamming Striker himself!

With Intercontinental Champion The Miz a guest on commentary, the challenger for the Intercontinental Title on next week’s WWE Main Event, Kofi Kingston, had the unenviable task of going one-on-one with the #1 Contender for the World Heavyweight Title, “The World’s Largest Athlete” Big Show. In the end, it was Big Show dropping Kofi Kingston with the W.M.D. en route to picking up the win. After the match, the referee and EMT’s tend to Kofi Kingston, but The Miz gets in the ring, saying that Kofi is always the one lying flat on his back, saying that Kofi always comes up short. Miz then says that he is now going to leave with his head held high and the Intercontinental Title over his shoulder, the same way he will leave after he beats Kofi on WWE Main Event.

Backstage, Layla and Kaitlyn confront SmackDown General Manager Booker T over some crucial new evidence as they claim that Aksana found a blonde wig in Eve’s luggage. Booker T’s Assistant and reigning Divas Champion, Eve, disputes this, saying that she found a blonde wig in Theodore Long’s bag, putting the wig on the Senior Advisor. Booker then escorts Layla and Kaitlyn to discuss things further as Theodore Long tells Eve that he has nothing to do with the attack on Kaitlyn and Eve claims that she also had nothing to do with it.

Before he and Rey Mysterio face Team Rhodes Scholars with the winners facing Team Hell No for the WWE Tag Team Titles at Hell in a Cell, “The International Sensation” Sin Cara went one-on-one with “The Intellectual Savior of the Masses” Damien Sandow, with Cody Rhodes in his corner. During the match, Cody Rhodes pulls Sin Cara off of the ring apron, which results in the referee ejecting Rhodes from ringside. However, Damien Sandow’s argument with the referee would cost Sandow as Sin Cara hits a hurrincanrana on Sandow, pinning him for the win.

Then it was time for the main event as “The Mexican Aristocrat” Alberto Del Rio, with Ricardo Rodriguez in his corner, went one-on-one with one-half of the WWE Tag Team Champions, Daniel Bryan. In a big victory for “The Mexican Aristocrat”, Alberto Del Rio would work over the arm of Daniel Bryan throughout the match before locking in the cross armbreaker on the WWE Tag Team Champion, leaving Bryan no choice but to tap out as Del Rio picks up the win. After the match, Alberto Del Rio says that social media has tricked the fans because Randy Orton will not be there, showing the punishment that Orton took two weeks ago on SmackDown from Del Rio, as well as the beating he took from Big Show on WWE Main Event. Del Rio then proclaims that he is the new “apex predator” in the WWE, calling Orton a “slimy, garden snake” and saying that Orton made the right decision by “hiding in the shadows”. Del Rio then mocks “The Viper”, even getting into the RKO stance, but when Del Rio turns around, he finds Orton looking him in the eyes! Orton then takes it to Del Rio on the outside, sending “The Mexican Aristocrat” face-first into the steel ring post and shoulder-first into the ring steps. “The Viper” then takes the announce table apart, placing Del Rio on the table. Before Del Rio could do any further damage, Ricardo Rodriguez jumps on Orton’s back, allowing Del Rio to escape. However, Rodriguez would be the victim of Orton’s wrath as Orton would drop Del Rio’s personal ring announcer with the RKO on the announce table!