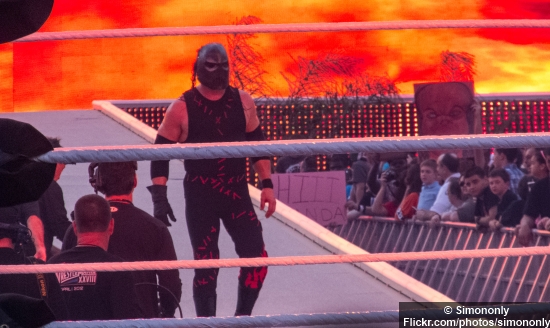 Five nights after Night of Champions, the 683rd edition of WWE Friday Night SmackDown came to you from the Wells Fargo Center in Philadelphia, PA. For the first time in eight months, WWE Hall of Famer “The Rated-R Superstar” Edge would appear on SmackDown as the eleven-time World Champion gives his take on the anger issues between new WWE Tag Team Champions Kane & Daniel Bryan! Also, after Booker T made the last minute decision to reinstate the Brogue Kick mere seconds before the World Heavyweight Title match at Night of Champions, a decision that would end up costing Alberto Del Rio the World Heavyweight Championship, World Heavyweight Champion Sheamus teams with “The Viper” Randy Orton to face “The Mexican Aristocrat” Alberto Del Rio and “Mr. Money-in-the-Bank” Dolph Ziggler.

As promised, SmackDown kicks off with WWE Hall of Famer and eleven-time World Champion “The Rated-R Superstar” Edge! Edge says that it was eighteen months ago that he was forced to retire as the World Heavyweight Champion and things have come full circle as he has been able to enjoy the WWE as a fan again, not just as a performer. Edge continues that he has seen some crazy things in the WWE, but nothing like what is going on between new WWE Tag Team Champions Kane & Daniel Bryan. Edge says that, as a twelve-time tag team champion, he knows what it takes to succeed in the tag team division. Edge is then interrupted by one half of the WWE Tag Team Champions, Daniel Bryan, who says that “they” did not become the tag team champions because he is the tag team champions. Bryan then repeatedly shouts, “I’m the tag team champions” before saying that he is an “anchor” and he is one with his “emotions”. Bryan then says that Dr. Shelby has taught them that their anger often peaks in the “heat of the moment”. Bryan then asks Edge if Edge thinks about the pain he and his ex-wife, Vickie Guerrero, have caused each other. Bryan follows this up by asking if anyone truly “knows” Edge, telling Edge to go back to “acting” and go back to “retirement”. Bryan then says that there is “nothing” that he or the fans can do to make him snap, but Edge takes this as a challenge, taunting Bryan until Bryan begins to scream “no”.

The proceedings are then interrupted by the other half of the WWE Tag Team Champions, Kane, who proclaims, “I’m the tag team champions”. This sparks another shouting match between Kane and Daniel Bryan with Edge screaming at them to get them to stop with Kane offering some “relaxation exercises” for Edge. The Hall of Famer then begins to lose his cool, saying that he understands how Daniel Bryan can transform into being one with his feelings, but he cannot comprehend how Kane, with all of the dastardly things that Kane has done over the years, has become anger-free. Edge reminds Kane that he stole Kane’s wife and Kane broke up his wedding to Kane’s ex-wife by tombstoning the priest, adding that he has even tortured Kane’s father, Paul Bearer. Edge asks Kane if he remembers all of the horrible things they have done to one another and a seething Kane says that, yes, he does remember all of those events, saying that he should “rectify” it right now. Edge then takes his jacket off and looks like he is ready to fight, but Kane holds out his arms, wanting to “hug it out” with his former rival with “The Rated-R Superstar” reluctantly embracing Kane! This sends Daniel Bryan into a shouting fit, but Kane and Edge invite Bryan to join the hugging. However, Damien Sandow interrupts, saying that Kane and Daniel Bryan’s attempts to “hug it out” is an “abomination”, putting down the fans for supporting it. Edge then cuts Sandow, daring the intellectual to come to the ring and face off against one of the tag team champions. Edge then polls the fans on if Sandow should face Kane or Daniel Bryan with the fans showing their support for Kane and, shortly after this, the match was made official!

Per the orders of SmackDown General Manager Booker T, the opening match of the night saw one-half of the WWE Tag Team Champions, “The Big Red Monster” Kane, with Daniel Bryan in his corner, go one-on-one with “The Intellectual Savior of the Masses” Damien Sandow. During the match, Daniel Bryan distracts his tag team partner, allowing Damien Sandow to hit the straightjacket neckbreaker on Kane en route to picking up a huge upset victory over “The Big Red Monster”!

Backstage, an irate argument between Kane and Daniel Bryan is settled by Dr. Shelby, who makes an agreement that, if Kane agrees to not rip Daniel Bryan’s beard off, then Bryan will give Kane his title belt back. Dr. Shelby also says that, since Bryan cost Kane his match, then he will talk to Booker T and get a match for Daniel Bryan.

The new Divas Champion Eve was a guest on commentary as former champion Layla went one-on-one with Natalya. In the end, it was Layla hitting the Lay Out on Natalya en route to picking up the win.

After defeating Alberto Del Rio at Night of Champions to retain the World Heavyweight Title, World Heavyweight Champion Sheamus teamed with “The Viper” Randy Orton to face the team of Alberto Del Rio, with Ricardo Rodriguez in his corner, and “Mr. Money-in-the-Bank” Dolph Ziggler, with Vickie Guerrero in his corner. At the end of a chaotic match, Dolph Ziggler would try to use the Money-in-the-Bank briefcase, but Sheamus would counter, hitting the Brogue Kick on “Mr. Money-in-the-Bank” en route to picking up the win for himself and Randy Orton.

After costing his tag team partner, Kane, his match against Damien Sandow, WWE Tag Team Champion Daniel Bryan went one-on-one with Cody Rhodes. During the match, Daniel Bryan would try to lock in the No Lock on Cody Rhodes, but Kane would come out, distracting Daniel Bryan long enough for Rhodes to hit the Cross Rhodes for the win.

Backstage, a bickering Kane & Daniel Bryan are interrupted by the men who defeated them, Damien Sandow & Cody Rhodes, who call the team a joke. However, the WWE Tag Team Champions get on the same page to challenge Sandow & Rhodes to a tag match!

“The Funkasaurus” was in action on SmackDown as Brodus Clay went one-on-one with Heath Slater. During the match, Jinder Mahal & Drew McIntyre inexplicably rush the ring, attacking Brodus Clay! Mahal and McIntyre are then joined by Slater as an apparent plan comes together between the three Superstars. The attack then concludes with the Future Shock DDT by McIntyre and the Camel Clutch by Mahal. What is the reason behind this new alliance and why have they targeted Brodus Clay?

The United States Champion was in action on SmackDown as Antonio Cesaro, with Aksana in his corner, went one-on-one with former champion Santino Marella in a non-title match. During the match, Aksana would get inadvertently knocked into the ring, which distracts the referee and keeps him from making the count for Cesaro. Moments later, Santino is able to catch Cesaro with a roll-up to pick up the non-title win. After the match, Cesaro shows no concern for Aksana before the United States Champion abruptly breaks up with the woman that brought Cesaro to the WWE!

With Tyson Kidd & Justin Gabriel, Jimmy & Jey Uso, and The Prime Time Players surrounding the ring, the main event of the evening saw WWE Tag Team Champions Kane & Daniel Bryan face Cody Rhodes & Damien Sandow in a non-title match. During the match, a frustrated Cody Rhodes would attack Kane with a steel chair, bringing an end to the match. After the match, Kane and Daniel Bryan would get on the same page and, instead of using the chair himself, Bryan would hand the chair over to his tag team partner as Kane uses it on the mid-section of Rhodes, sending Rhodes from the ring. Then, as the tag team division looks on, Kane & Daniel Bryan take turns waffling Damien Sandow with steel chair shots as both men smile at each other! Kane then retries the three tag teams as Jimmy Uso, Jey Uso, Tyson Kidd, Justin Gabriel, Darren Young, and Titus O’Neil all feel the effects of the tag team champions’ “therapy”. Then, with the tag team division in ruins, the WWE Tag Team Champions stand tall and unified before the bickering resumes again!