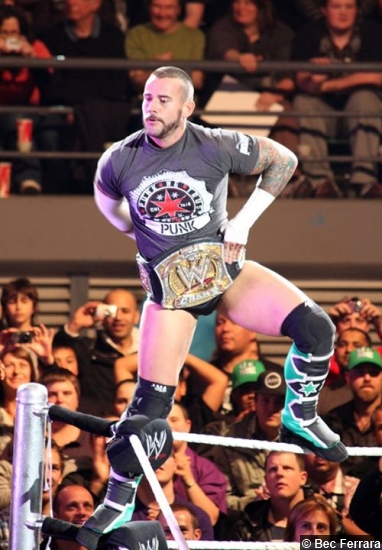 Close, But No Championship.

The one night of the year where every championship in the WWE will be on the line has arrived as the sixth annual WWE Night of Champions came to you, live on pay-per-view, from the TD Garden in Boston, MA. In his newfound quest for respect, CM Punk has shown absolutely no respect for his fellow Superstars and legends, but, at Night of Champions, Punk will defend the WWE Championship against a man who has built his career on respect, John Cena. With the Brogue Kick taken out of his arsenal until further notice per the orders of SmackDown General Manager Booker T, Sheamus will defend the World Heavyweight Title against one of the men responsible for getting his Brogue Kick banned, Alberto Del Rio. After a recent loss to Randy Orton, Dolph Ziggler demanded a rematch with “The Viper” and, at Night of Champions, he will get it as “Mr. Money-in-the-Bank” Dolph Ziggler goes one-on-one with Randy Orton. After their unique trip to anger management and the miraculous work of Dr. Shelby, Kane and Daniel Bryan managed to get themselves a shot at the WWE Tag Team Titles as the odd pairing will challenge R-Truth & Kofi Kingston for the tag team gold! After recent issues with Cody Rhodes and getting pinned by Sin Cara and Rey Mysterio over recent weeks, The Miz would have the unenviable task of defending his Intercontinental Title against Cody Rhodes, “The International Sensation” Sin Cara, and “The Master of the 619” Rey Mysterio in a Fatal 4-Way Match. Despite his protests, Antonio Cesaro will defend the United States Title at Night of Champions, but “The Swiss Sensation” will not know the identity of his #1 Contender until the Night of Champions pre-show, where Superstars will take part in a battle royal to determine the #1 Contender for the United States Title. The Divas Title would also be on the line at the event as Kaitlyn would compete in her first match for the Divas Title as she challenges her friend, Layla, for the title.

The show starts off with commentator Michael Cole, who explains what happened to his friend and colleague, Jerry “The King” Lawler, during Monday’s RAW. Cole states that the Hall of Famer had a heart attack during the live show and WWE Physician Dr. Michael Sampson performed CPR on “The King” for fifteen minutes, which would save Lawler’s life. Cole says that he has spoken with Lawler and “The King” is in good spirits, even making jokes. Cole then gladly reports that Lawler will be released from the hospital this week as “The King” will be allowed to return to his home in Memphis. Cole then concludes, saying that the fans will never believe who will be joining him on commentary for the night. The huge announcement is then made that the longest reigning WWE Champion in SmackDown history will be returning to the announce position as none other than John “Bradshaw” Layfield will help Cole call the action!

The opening match of the night was for the Intercontinental Championship as The Miz would defend his Intercontinental Title against Cody Rhodes, Sin Cara, and Rey Mysterio in a Fatal 4-Way Match. During the match, Sin Cara would present a duplicate mask with the intent of embarrassing Cody Rhodes again, but Rhodes would fight back. Shortly after this, The Miz would lift Sin Cara up for a powerbomb, but Sin Cara would put the mask over the head of The Miz. Cody Rhodes was then ready to deliver Cross Rhodes to Sin Cara, but a blinded and masked Miz backs into Rhodes and immediately grabs him, hitting the Skull Crushing Finale and pinning Rhodes to retain the Intercontinental Title!

Backstage, The Prime Time Players are in the middle of a discussion with Booker T’s Assistant, Eve, when Eve is brought to an emergency. Eve then finds Kaitlyn being attended to by an EMT following an apparent attack on Kaitlyn’s ankle. Eve tries to find out more information and Kaitlyn says that her attacker’s face was hidden. Kaitlyn then tries her best to get to her feet so that she can compete, but the #1 Contender cannot even stand on her feet. Eve then says that she will talk to Booker T to try and set a future date for Kaitlyn’s title match, but Kaitlyn will not be able to compete tonight.

Then it was time for the WWE Tag Team Titles to be defended as R-Truth & Kofi Kingston would defend the gold against the odd pairing of Daniel Bryan & “The Big Red Monster” Kane. During the match, a miscue between Kane & Daniel Bryan leads to a physical disagreement between the two anger management patients. However, Kane & Daniel Bryan would remember the teachings of Dr. Shelby as both men “hug it out” to resolve the tension! Later on, Kane tags himself into the match, sparking another argument with Daniel Bryan. Bryan then holds Kane’s foot on the top rope, preventing the hurrincanrana by Kofi Kingston. Kane then shoves Daniel Bryan and, in one of the most bizarre ends to a title match, Bryan shoves Kane off of the top rope, but Kane lands on Kofi as Kane gets the three-count as Kane & Daniel Bryan win the WWE Tag Team Titles! After the match, the new WWE Tag Team Champions scream at each other, claiming that they, individually, are the tag team champions before Kane storms out of the ring.

Backstage, SmackDown General Manager Booker T is confronted by his assistant, Eve, who is panicking over Kaitlyn’s inability to compete. While the GM is content to reschedule the match, Theodore Long informs Booker that every title must be on the line at Night of Champions. Booker then brings Eve up as a replacement in the title match for Kaitlyn, citing that Eve did defeat Kaitlyn a couple of weeks ago. Eve then accepts the match, saying that she will take part in the Divas Title match for the “good of the WWE”. Eve then leaves to prepare, followed by Booker T, leaving Theodore Long along as the Senior Advisor appears to sense something suspicious about the situation.

In his first pay-per-view title defense, Antonio Cesaro, with Aksana in his corner, would defend the United States Title against the winner of the pre-show battle royal, “The Long Island Iced Z” Zack Ryder. In the end, it was a distraction by Aksana that would allow Antonio Cesaro to take advantage, hitting the Neutralizer on Zack Ryder en route to picking up the win and successfully retaining the United States Title.

In a rematch demanded by Dolph Ziggler, “Mr. Money-in-the-Bank” Dolph Ziggler, with Vickie Guerrero in his corner, would go one-on-one with “The Viper” Randy Orton. During the hard-fought match, the action spills to the outside of the ring where Orton plants Ziggler with a DDT on the arena floor, but Dolph manages to avoid defeat. In the end, it was Randy Orton coming out of nowhere with a mid-air RKO on Dolph Ziggler en route to “The Viper” picking up the win over “Mr. Money-in-the-Bank”.

After Kaitlyn had her ankle injured by an unknown assailant, Eve would substitute for the injured #1 Contender as Eve challenges Layla for the Divas Title. In the end, it was Eve hitting the swinging neckbreaker on Layla en route to pinning Layla to become the new Divas Champion.

Before the World Heavyweight Title match can begin, SmackDown General Manager Booker T comes out, saying that he has completed his investigation regarding the Brogue Kick and, given the evidence, as well as the danger of being a Superstar, he has concluded that the Brogue Kick will be reinstated!

With the Brogue Kick now made legal again by Booker T, Sheamus would defend the World Heavyweight Championship against “The Mexican Aristocrat” Alberto Del Rio, with David Otunga and Ricardo Rodriguez in his corner. When the match begins, Sheamus goes for the Brogue Kick on Alberto Del Rio, but Del Rio dodges the move, but Sheamus connects with David Otunga, who is later helped from ringside to the backstage area! Throughout the match, Sheamus was able to survive multiple applications of the cross armbreaker of Alberto Del Rio and Sheamus fought through the pain, hitting the Brogue Kick on Del Rio en route to picking up the win and narrowly retaining the World Heavyweight Title.

Before the main event, CM Punk’s new associate, Paul Heyman, says that, while he is from New York City, he is just like the Boston fans as he is going to sit ringside and “pay respect” to the WWE Championship and the self-professed “Paul Heyman guy” CM Punk.

Then it was time for the main event of the evening as the respect-obsessed CM Punk, with Paul Heyman in his corner, defends the WWE Championship against Boston’s own John Cena. Throughout the match, both CM Punk and John Cena would throw everything they had at each other, with Punk even resorting to using the Rock Bottom on Cena, but Cena continues to kick out! Not to be outdone, Punk kicks out of the Attitude Adjustment moments later! Moments later, Cena delivers a back suplex off of the top rope to CM Punk, appearing to pin Punk to win his eleventh WWE Championship! However, amidst Cena’s celebration, the referee takes the WWE Title belt from Cena and hands it back to CM Punk as it is revealed that both Punk and Cena’s shoulders were pinned to the mat, meaning the match is a draw and CM Punk is still the WWE Champion! Cena then takes issue with the referee’s call, giving Punk the opportunity to blast Cena with the WWE Title belt! Punk then walks out of the TD Garden with a smile on his face, knowing that he is still the WWE Champion.