I haven’t been hooked on the WWE for over a decade, watching it on and off, with it just not as fun or addictive as it was during the Attitude Era (admittedly when I was younger).

The days of the original Degeneration X, the McMahon-Helmsley Faction and the Stone Cold-McMahon War are long behind us.  Great characters and entertainers such as Stone Cold and The Rock don’t compete any longer, Chris Jericho isn’t the same microphone-abusing, in-ring entertainer he was on route to becoming the first Undisputed Champion all those years ago.  The likes of Alberto Del Rio and Daniel Bryan are main eventing these days.  Oh, and Mark Henry has had a reign as Heavyweight Champion.  Not to say he doesn’t deserve that, he was just a midcarder back in the day and hasn’t exactly improved much since.

Still, the WWE do have John Cena, CM Punk and Randy Orton currently on their books who I believe to be the company’s strongest wrestlers.  On the downside, they have Ryback; a terrible copy of Goldberg (Gillberg was much better), Vickie Guerrero, who makes me switch the TV off as soon as she grabs a microphone (she’s the kind of annoying character I’d expect in a TV soap, not sports entertainment) and Brodus Clay… the “Funkasaurus”.  It’s gone from Attitude to children’s entertainment.  I must be getting old.

TNA haven’t done their best to win over the declining WWE fans over the years.  For many years their efforts had been to pick up leftovers from the WWE and the has-beens from WCW.  Fortunately Kevin Nash is no longer on screen, and the likes of Austin Aries and Bobby Roode have had their chance to shine.  And I think they’re doing a good job of it currently.  Kurt Angle, a fantastic wrestler and solid on the mic hasn’t been involved in anything much for a while and TNA are making a huge mistake in giving Jeff Hardy a microphone.  But they’re getting better.  Slowly.

And the recent storyline involving the Aces & Eights stable against the whole of the TNA roster has been a breath of fresh air.  It’s fantastic.

I have to admit, I hadn’t ever been hooked on TNA.  I watched some of its early stuff, being a fan of D’Lo Brown and then the odd show here and there over the years.  After watching it more and more towards the end of last year and really enjoying Bobby Roode as champion, especially with the “selfish generation” was starting to win me over from the WWE.  Giving the likes of Austin Aries the chance to become champion was another promising move by TNA.

The start of the Aces & Eights storyline with them assaulting Hulk Hogan backstage was rather enjoyable.  I was a fan of the Hulkster when I was a child, but that’s 20 years ago.  The older you get, the sooner you realise he’s actually a crap wrestler, crap on the microphone and way past his best.  Oh, and he did use steroids.  I was really disappointed to see TNA make him the General Manager a couple of months ago. 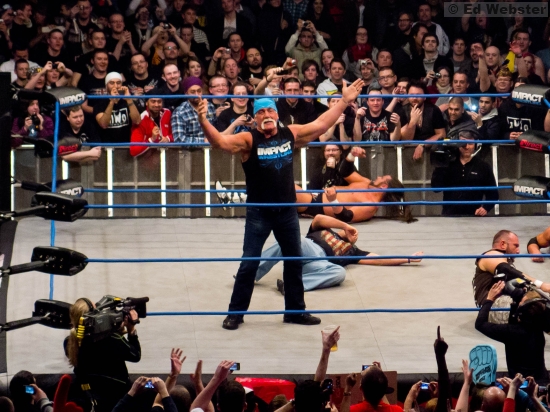 After attacking Hogan, Aces & Eights turned to Sting and shortly after a number of members on the roster.  Soon after it turned into an all-out war.  This storyline has really won me over.  I’m addicted to TNA right now, eagerly tuning into each show on a Sunday evening here in the UK (and no, I’m not boring enough to read any spoilers).

Dozens and dozens of beer-drinking, poker-playing masked old men beating up the likes of Hulk Hogan and well-toned superstars has been really enjoyable!  And the storyline is getting better and better each week.  I’m not sure where it’s going or when it’s going to end and it was really pleasing to see it didn’t end last week and that Aces & Eights did come out on top after a massive brawl that the TNA superstars were on top of for a long while.  Until Austin Aries got his arm smashed in.  And a show later, knocked out.

I have to admit, I even get a few butterflies in my stomach towards the end of each show, not having a clue what is going to happen or where the attacks are going to come from.  It’s really enjoyable and unpredictable at the moment.

Who is behind this?  I really don’t know.  Hopefully not Bobby Roode and I don’t think it will be.  Hopefully not Magnus either (I have not seen him once on screen fighting against Aces & Eights, but maybe that’s my bad eyesight?).  I’m a big fan of Magnus – really good wrestler and fun on the microphone.  Oh, and like me, he’s British 🙂  He seems to have an upcoming feud with Samoa Joe anyway.

TNA have done a fantastic job with this Aces & Eights storyline to date.  Please don’t spoil it now by ending with Hulk Hogan coming out on top.  That would be so predictable, right?..