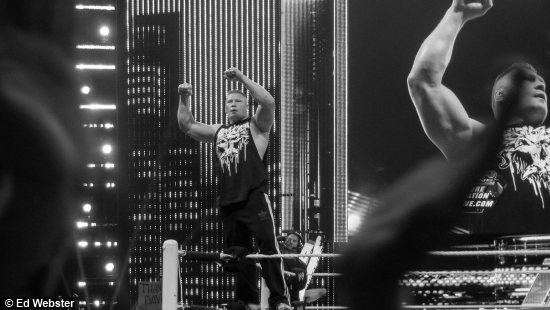 The 25th anniversary of the premiere WWE event of the summer, SummerSlam, came to you, live on pay-per-view from the unofficial home of “The Biggest Event of the Summer”, the Staples Center in Los Angeles, CA. He has won thirteen World Titles and is synonymous with the spotlight in the WWE, but one thing that WWE COO Triple H has never done is go one-on-one with the destructive and remorseless war machine known as Brock Lesnar, but after Brock used the crippling Kimura Lock to break both Triple H and Shawn Michaels’ arms over the past few months, “The Game” certainly has ample motivation to not only defeat, but destroy Lesnar as the two ring warriors go to war at SummerSlam! After interrupting a #1 Contender’s Match between John Cena and Big Show a few weeks ago, WWE Champion CM Punk thought he was off the hook for SummerSlam, RAW General Manager AJ Lee had a different plan, announcing that Punk will defend the WWE Championship against both John Cena and “The World’s Largest Athlete” Big Show. After weeks of saying that Chris Jericho cannot win the “big one”, Dolph Ziggler may learn the truth when “Mr. Money-in-the-Bank” goes one-on-one with “Y2J” Chris Jericho. The World Heavyweight Championship would be up for grabs at SummerSlam as “The Mexican Aristocrat” Alberto Del Rio challenges Sheamus for the gold. Two of the WWE’s most unhinged Superstars would collide as Daniel Bryan squares off with “The Big Red Monster” Kane. In his first defense of the Intercontinental Title, The Miz would defend the prestigious title against the veteran high-flyer, Rey Mysterio. The fastest rising tag team in the WWE today would get their shot at tag team gold as The Prime Time Players challenge R-Truth & Kofi Kingston for the WWE Tag Team Championship.

The opening match of the night was a grudge match between a respected veteran and a hungry young Superstar as “Y2J” Chris Jericho went one-on-one with “Mr. Money-in-the-Bank” Dolph Ziggler, with Vickie Guerrero in his corner. After surviving the Zig Zag and the interference of Vickie Guerrero, the veteran Chris Jericho would lock in the Walls of Jericho on Dolph Ziggler, forcing “Mr. Money-in-the-Bank” to tap out to win the “big one”!

The increasingly unhinged Daniel Bryan would go one-on-one with a man who has revolutionized the term, psychotic, “The Big Red Monster” Kane. In the end, Kane would hit the chokeslam on Daniel Bryan, but when Kane tries to follow it up with the Tombstone Piledriver, Bryan would counter into a roll-up, picking up his first win ever over Kane.

Moments after getting caught off-guard with a roll-up by Daniel Bryan, Kane was incense backstage, tossing things left and right, making everyone in his path scatter. Josh Mathews would then try to question “The Big Red Monster” with Mathews informing Kane that Daniel Bryan has left the arena, but Kane does not react well to his news as Kane hurls Mathews to the side before continuing to rip the backstage area apart.

Then it was time for the World Heavyweight Championship to be decided as Sheamus defends the World Heavyweight Title against “The Mexican Aristocrat” Alberto Del Rio, with Ricardo Rodriguez in his corner. During the match, Sheamus’ head would inadvertently connect with the exposed steel turnbuckle, but Sheamus was still able to kick out. Alberto Del Rio then drags Ricardo Rodriguez into the ring and Rodriguez tries to throw his shoe to Del Rio, but Del Rio misses catching the shoe. Sheamus then gets his hands on the shoe and, behind the referee’s back, Sheamus blasts Del Rio with the shoe before hitting the Irish Curse Backbreaker on Del Rio. However, Del Rio is able to get his foot on the rope, but the referee does not see it and, after the three-count, Sheamus knocks Del Rio’s foot off the rope as Sheamus is able to retain the World Heavyweight Title!

The WWE Championship was up for grabs at SummerSlam as CM Punk defended the WWE Title against John Cena and “The World’s Largest Athlete” Big Show in a Triple Threat Match. During the match, CM Punk and John Cena are both able to lock in submissions on Big Show at the same time with Big Show tapping out. The referee calls for the bell, but a winner is not named. RAW General Manager AJ Lee then comes out and, despite the protests of both Punk and Cena, the GM orders the match to be restarted! Shortly after this, John Cena hits the Attitude Adjustment on Big Show, but CM Punk would act quickly, tossing Cena out of the ring and stealing the pinfall for himself as CM Punk successfully retains the WWE Title.

Then it was time for the perfect storm of a main event as, for the first time ever, thirteen-time World Champion “The Game” Triple H would collide with the unstoppable force of destruction and devastation known as “The War Machine” Brock Lesnar, with Paul Heyman in Lesnar’s corner. During the hard-hitting match, Brock Lesnar would target the previously broken arm of Triple H, but “The Game” would target Lesnar’s problem area, Brock’s mid-section. Shortly after this, both Brock and Triple H would counter each other’s finishers, but “The Game” was finally able to hit the Pedigree on Lesnar with Brock still being able to kick out. Triple H would then go for a second Pedigree, but Brock would counter with a low blow that, at the behest of Triple H, would not result in a disqualification. Lesnar would then capitalize with the F-5 to the thirteen-time World Champion, but Triple H would kick out! Brock would waste no time in making his next move, locking in the crippling Kimura Lock on “The Game”, but Triple H would get to the ropes, which would eventually allow Triple H to battle out of the Kimura Lock moments before Triple H would hit the Pedigree again! Somehow, Lesnar would still have the stamina to lock in the Kimura Lock again and, in a scene eerily similar to what happened several months ago, Brock would appear to break the arm of Triple H as “The Game” frantically taps out as Brock defeats Triple H via submission! After the match, Brock Lesnar and Paul Heyman take their leave, but in the ring, Triple H refuses medical attention as “The Game” gets to his feet. The thirteen-time World Champion mouths “I’m sorry” to the fans before an emotional and dejected Triple H exits the ring, saying “goodbye” before exiting the arena.

What did you think of SummerSlam? Post your comments in the box below.