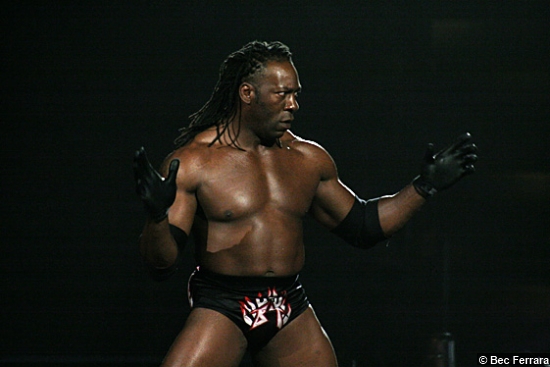 Two nights before SummerSlam, the 678th edition of WWE Friday Night SmackDown came to you from the Frank Erwin Center at UT Austin in Austin, TX. After a heinous and calculated assault on World Heavyweight Champion Sheamus last week, SmackDown General Manager Booker T made the call to remove Alberto Del Rio from his scheduled World Heavyweight Title match at SummerSlam, but on SmackDown, an irate Alberto Del Rio will confront the six-time World Champion! Also, after two weeks of being snubbed for a position in Booker T’s administration, former Divas Champion Eve would try and take the job as she went one-on-one with Kaitlyn with the winner being named the assistant to SmackDown General Manager Booker T.

After his vicious assault on Sheamus last week led to him losing his World Heavyweight Title shot at SummerSlam, SmackDown kicks off with “The Mexican Aristocrat” Alberto Del Rio and his personal ring announcer Ricardo Rodriguez. Del Rio says that he wants his title match back right now, accusing Sheamus of complaining and crying to the SmackDown General Manager, asking what kind of champion Sheamus is and what kind of GM Booker T is. Del Rio then says that he is not leaving the ring until he gets his title match reinstated. SmackDown General Manager Booker T wastes no time in making his way to the ring, saying that Del Rio has been a pain in his side. Del Rio says that Sheamus stole his car, so he behaved like a “man” by paying Sheamus back. Booker says that a “man” doesn’t hire five guys to dress up as cops to assault one man. Booker continues that Del Rio crossed the line last week and he will not “tolerate” Superstars overstepping their boundaries. Del Rio says that he earned his World Heavyweight Title match before saying that he talked to his lawyers. However, Del Rio is interrupted by “Y2J” Chris Jericho, who says that no one cares about his “whining and complaining”, calling Del Rio a “Chihuahua”. Del Rio then insults Jericho in Spanish, but Jericho delivers a Spanish insult of his own. Jericho then states that, after he defeats Dolph Ziggler at SummerSlam, maybe he will win the “ultimate big one” by defeating Sheamus for the World Heavyweight Title. Del Rio says that Sheamus stole his car, but he will not allow Jericho to steal his World Heavyweight Title match. Booker T then steps in between the two, saying that Sheamus will not compete at SummerSlam and that is final. The GM then announces a blockbuster main event as, for the first time ever on SmackDown, Chris Jericho will go one-on-one with Alberto Del Rio!

Booker T would earn a new assistant on SmackDown as former Divas Champion Eve would go one-on-one with Kaitlyn with the winner becoming the GM’s assistant with Booker T’s Senior Advisor Theodore Long a guest at ringside. In the end, it was Eve hitting a swinging neckbreaker on Kaitlyn en route to picking up the win and becoming Booker T’s new assistant, much to the chagrin of Theodore Long.

Two former World Heavyweight Champions would square off on SmackDown as “The Viper” Randy Orton went one-on-one with Daniel Bryan. During the match, Daniel Bryan was on the cusp of a major win as the submission expert has Randy Orton locked in the No Lock, but the pyro of Bryan’s SummerSlam opponent, Kane, ignites. This frightens Daniel Bryan as Bryan releases the hold and anticipates the arrival of Kane, but Kane does not show up. After realizing that Kane was not going to come out, Bryan re-enters the ring, where he is caught with the RKO by Randy Orton, who picks up the win. After the match, Kane comes out, laughing at Daniel Bryan.

With United States Champion Santino Marella a guest on commentary, the #1 Contender for the United States Title at the SummerSlam Pre-Show, Antonio Cesaro, with Aksana in his corner, would go one-on-one with “The Long Island Iced Z” Zack Ryder. In the end, it was Antonio Cesaro hitting the Neutralizer on Zack Ryder en route to picking up the win. After the match, Antonio Cesaro would confront Santino Marella, shoving Santino once and, when Santino got in the #1 Contender’s face, Cesaro shoved the United States Champion over the announce table.

Moments before his main event match, Chris Jericho is ambushed in the backstage area by his SummerSlam opponent, Dolph Ziggler, who blasts Jericho in the back of the head with his Money-in-the-Bank briefcase before ramming a giant steel cart into Jericho, squashing Jericho between the cart and the wall! Booker T is immediately on the scene, getting Dolph Ziggler back as the GM sends for a doctor.

It was then supposed to be time for the main event between Alberto Del Rio and Chris Jericho, but with “Y2J” taken out by Dolph Ziggler backstage, Del Rio claims that he is the “winner by forfeit”. Del Rio then demands that Booker T come out there and give him his SummerSlam title match, but to everyone’s surprise, Jericho slowly makes his way to the ring. Determined to not let the injuries slow him down, Jericho demands that the referee start the match with the referee reluctantly obeying as the match goes on as scheduled! During the match, Ricardo Rodriguez would get on the ring apron, distracting the referee while Dolph Ziggler pulls the top rope down, sending Jericho to the outside. Dolph then rolls Jericho back into the ring, where Del Rio hits Jericho with an enziguiri en route to picking up the tainted win. After the match, Alberto Del Rio would look to do further damage as he locks in the cross armbreaker on Jericho with Dolph verbally berating Jericho the entire time. Having seen enough, World Heavyweight Champion Sheamus rushes out, getting the better of Del Rio, but Del Rio would get a shot in on the injured arm of the champion and the two would trade blows before both combatants spilled to the outside of the ring, giving Del Rio the opportunity to make a hasty retreat! SmackDown General Manager Booker T then comes out, asking Sheamus what he is doing there and Sheamus says that he wants the World Heavyweight Title match at SummerSlam reinstated. Booker argues that Sheamus is injured, but Sheamus says that they would have to rip his arm off to stop him from competing. Sheamus continues that the only person who wants the match more than Del Rio is him. The reluctant General Manager goes against his better judgment by reinstating the World Heavyweight Title match for SummerSlam!

What did you think of the final SmackDown before SummerSlam? Post your comments in the box below.