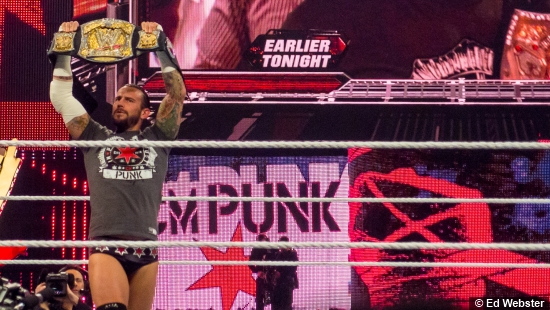 Thirteen nights before Money-in-the-Bank and three weeks before the 1,000th episode of RAW, the 997th edition of WWE Monday Night RAW came to you, live, from the Laredo Energy Arena in Laredo, TX. After having his arm broken by Brock Lesnar, WWE COO Triple H challenged the former UFC Champion to a main event match at SummerSlam with Brock’s legal representative, Paul Heyman, denying “The Game” his shot at revenge, but after Triple H decked Heyman on last week’s RAW, this week’s RAW will see Lesnar respond to Triple H’s SummerSlam challenge! As the WWE Board of Directors continues to decide who should be the permanent General Manager of RAW & SmackDown, a decision that will be revealed on the 1,000th RAW, this week’s Interim General Manager of both shows will be the longest reigning GM in the history of SmackDown as Theodore Long takes the reins one more time. Also, with appearances by Vader, “Rowdy” Roddy Piper, and Sycho Sid, another former RAW Superstar would make a surprise appearance on RAW!

WWE Champion CM Punk then interrupts, asking if he disagrees with Daniel Bryan and he says “yes”. Punk then asks if Cena disagrees and Cena says “yes” before Punk even asks Jerry Lawler, who says “yes”. The WWE Champion continues to mock Bryan by chanting “yes” before a frustrated Bryan interrupts and says that he is tired of everyone stealing his catchphrase, telling Punk to come up with an “original thought”. Punk then tells Bryan that the Special Referee for their WWE Title match, A.J., will count Bryan’s shoulders to the mat at Money-in-the-Bank. Punk also tells Cena that, if Cena wins the Money-in-the-Bank contract, then it will come down to Punk versus Cena again, much like last year. Chris Jericho then makes his way to the ring, telling Daniel Bryan to get used to people stealing his catchphrases because people do it to him all the time, targeting Punk and his proclamation of being the “best in the world”. Punk responds by calling Jericho, “Bon Jovi”. Jericho then advises Daniel Bryan to come up with some new catchphrases before Jericho provides examples from his own career, telling Bryan to “please shut the hell up”, as well as proclaiming RAW as “RAW is Jericho” and proclaiming that none of the fans will “never, ever be the same again”.

Chris Jericho then turns his attention to John Cena, saying that since he invented the Money-in-the-Bank Ladder Match, he will win the Money-in-the-Bank Ladder Match. Jericho then dares anyone to come to the ring and tell him otherwise before Jericho is met with a fellow competitor in the WWE Championship Contract Money-in-the-Bank Ladder Match as “The Big Red Monster” Kane makes his way to the ring, simply telling Jericho “otherwise”. The mood then changes when Big Show makes his way to the ring as Cena readies himself to fight the giant, but with Cena’s attention on Big Show, Daniel Bryan attacks Cena from behind, which sparks a huge brawl between all six Superstars. With Bryan laying some kicks in on Cena, CM Punk jumps in, taking the #1 Contender down with a kick to the head. Jericho then takes Punk down and Kane pummels Jericho before Big Show takes Kane down with a shoulder block, leaving Big Show the only one standing in the ring!

A big 8-Man Tag Match kicks off the action for the night as Intercontinental Champion Christian, United States Champion Santino Marella, and WWE Tag Team Champions R-Truth & Kofi Kingston faced the #1 Contenders for the WWE Tag Team Titles, The Prime Time Players, David Otunga, & Cody Rhodes, with A.W. in their corner. In the middle of the match, A.W. decides that The Prime Time Players had had enough action as the promoter leads Darren Young & Titus O’Neil from the ring. David Otunga then tries to tag in Cody Rhodes, but Rhodes leaves as well, leaving Otunga to face all four champions on his own! Things then go from bad to worse for the Harvard Law graduate as Brodus Clay makes his way to the ring and, with Santino Marella in the ring, as well as Christian, R-Truth, and Kofi Kingston on the outside of the ring, there was nowhere to run for Otunga as Brodus sends Otunga back into the ring and right into the Cobra Strike by Santino en route to Santino picking up the win for himself, Christian, R-Truth, & Kingston. The end of the match provided no salvation for Otunga, however, as the post-match saw Christian plant Otunga with the Killswitch before Brodus Clay squashes Otunga with the Funkasplash! All four champions then join Brodus, The Funkadactyls and some kids from the audience as the whole group celebrate in the ring, “Funkasaurus” style.

Backstage, this week’s Interim General Manager Theodore Long informs Alberto Del Rio that the WWE Board of Directors have named Del Rio the #1 Contender for the World Heavyweight Title at Money-in-the-Bank!

Per the orders of Interim General Manager Theodore Long, the new #1 Contender for the World Heavyweight Title, Alberto Del Rio, was set to go one-on-one with Sin Cara. However, Del Rio would not even allow the match to begin as Del Rio attacks Sin Cara before the match, locking in the cross armbreaker on the outside of the ring before referees are finally able to break things up.

Backstage, Daniel Bryan grabs a rose and presents it to A.J., but the unstable A.J. sees through Bryan’s ruse as A.J. says that Bryan never cared about her. A.J. then says that she cannot wait to win her match and then run into the arms of CM Punk. A.J. then bites the top of the rose off and spits it on the floor.

Two weeks after getting decked by WWE COO Triple H, Brock Lesnar’s legal representative, Paul Heyman, appears live via satellite. Heyman reveals that Lesnar will give his answer, in person, to Triple H’s face in three weeks at the 1,000th episode of RAW! Heyman then says that Triple H facing Lesnar at SummerSlam is a “way out” for the COO as Triple H will never have to compete in the ring again because Lesnar will end his in-ring career. Heyman continues that Triple H can then become the “heir apparent” and tell everyone that he went out in a “blaze of glory” against Lesnar at SummerSlam before saying that, if Lesnar does accept the challenge, then the match will be a “mercy killing”!

In a bizarre Mixed Tag Match, “The Show-Off” Dolph Ziggler teams with his manager/girlfriend, the self-proclaimed “Queen Diva” Vickie Guerrero, to face World Heavyweight Champion Sheamus and the always unbalanced A.J. In the end, it was A.J. hitting the Shining Wizard on Vickie Guerrero en route to picking up the win. After the match, A.J. grabs a microphone and skips from the ring, chanting “yes”.

After her Mixed Tag victory, A.J. finds WWE Champion CM Punk backstage, interrupting Punk’s phone call to ask if Punk saw her match, but the WWE Champion says that he did not know that A.J. had a match and he has been on the phone for a while. This leaves A.J. upset as the Diva walks away, disappointed as Punk is at a loss for words.

After being on the wrong end of attacks by the likes of Vader and Sycho Sid, “The One-Man Band” Heath Slater appears on RAW and claims that he is “not a clown”. This brings out Slater’s surprise opponent as past RAW Superstar Doink The Clown comes out! Heath Slater appears to get a bit of redemption by actually hitting his modified neckbreaker on Doink to pick up the win!

The true surprise came after the match as Heath Slater comes face-to-face with “The Master of the Diamond Cutter” and former WCW Champion Diamond Dallas Page! DDP initially looks like he is going to make nice with Heath Slater, but the former main event star turns around and drops Slater with the Diamond Cutter!

After their brawl earlier in the night, “The World’s Largest Athlete” Big Show collided with “The Big Red Monster” Kane in a No Disqualification Match. During the lawless match, Big Show hits a shoulder block on Kane, but inadvertently collides with a steel chair as well. Despite an injured shoulder, Big Show manages to power Kane up, delivering a huge chokeslam onto a steel chair en route to picking up the win.

Backstage, Interim GM Theodore Long confronts the former Executive Administrator for John Laurinaitis, Eve, as the GM hands Eve a giant nametag like the one Eve made Long wear during the “People Power” regime. Eve rips the nametag up before confronting A.J., accusing A.J. of taking a page out of her book. A.J. then asks who Eve will “brown-nose” next, saying that Eve will “do anything” to get attention. A.J. then says that she will show Eve and everyone else how to get “attention”.

Two of the nine competitors in the World Heavyweight Championship Contract Money-in-the-Bank Ladder Match squared off on RAW as Tensai, with Sakamoto in his corner, went one-on-one with Tyson Kidd. In the biggest upset of his career, Tyson Kidd manages to roll Tensai up to pick up the win! After the match, Tensai would again attack his worshipper, Sakamoto, punishing Sakamoto in and out of the ring, leaving the manager in a heap on the outside.

Moments after losing to Tyson Kidd, Kidd is being interviewed backstage when Tensai attacks Kidd from behind, pummeling Kidd before twice hurling him into the steel lockers.

Then it was time for the main event as WWE Champion CM Punk teams with John Cena to face the #1 Contender for the WWE Title, Daniel Bryan and six-time World Champion Chris Jericho. During the match, the animosity between John Cena and Chris Jericho would boil over as Cena and Jericho brawl all the way backstage, leaving CM Punk and Daniel Bryan to battle it out. Shortly after this, the Special Referee for the WWE Title match, A.J., comes out and skips around ringside. However, neither Punk nor Bryan even notices A.J., which upsets the unhinged Diva, who sets up a table on the outside of the ring! A.J. then cautiously climbs to the top rope, seemingly ready to leap from the corner through the table! However, Daniel Bryan exits the ring, pleading with A.J. not to jump before Punk meets A.J. on the top rope, telling her not to jump as well. A.J. then kisses the WWE Champion, leaving Punk stunned before A.J. shoves Punk off of the top rope as Punk falls on top of Daniel Bryan and both men crash through the table! A.J. then chants “yes” with a smile on her face as she looks down at the carnage she caused.