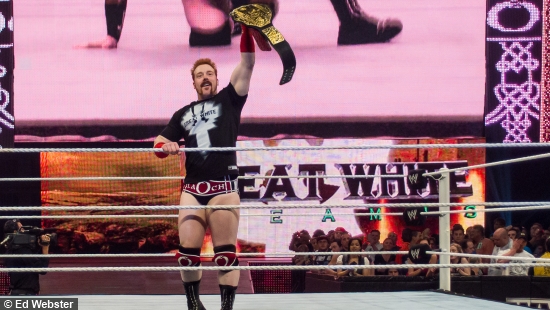 Night of the Mockery.

Nine nights before No Way Out, the 668th edition of WWE Friday Night SmackDown came to you from the Colonial Life Arena at the University of South Carolina in Columbia, SC. After two impressive outings against World Heavyweight Champion Sheamus last week, “The Show-Off” would face another champion as Dolph Ziggler would go one-on-one with Intercontinental Champion Christian in a non-title match. Also, after a few weeks away from SmackDown, the former Rugby star Antonio Cesaro returns to SmackDown.

With his World Heavyweight Title match against champion Sheamus nine nights away at No Way Out, SmackDown kicks off with the #1 Contender for the World Heavyweight Title, “The Mexican Aristocrat” Alberto Del Rio. Del Rio first shows footage of what he did to Sheamus on RAW, where the #1 Contender hung the champion over the front of the staging area, holding Sheamus’ arm in the cross armbreaker. Del Rio then tells Sheamus to not mess with him before vowing to break the champion’s arm at No Way Out and become the new World Heavyweight Champion. It then sounds as though Sheamus would be interrupting his No Way Out opponent, but what comes out is Del Rio’s personal ring announcer, Ricardo Rodriguez, dressed like the World Heavyweight Champion. Del Rio then says that “anyone” can be Sheamus, but there is “only one” Alberto Del Rio before Del Rio has Ricardo make a mockery of Sheamus’ Brogue Kick. Having seen enough, the genuine article interrupts the farce as a furious Sheamus comes out, fighting off both men before focusing on Del Rio. Then, when it looked like Del Rio and Rodriguez would make a quick escape, Sheamus catches both men on the ramp, tossing Rodriguez to the side. However, Rodriguez would re-emerge, holding Sheamus as Del Rio gets some well-placed kicks on the injured arm of Sheamus before referees rush out to break up the assault. Appearing on behalf of the absent General Manager John Laurinaitis, Theodore Long comes out and reveals two huge matches for SmackDown as Sheamus would go one-on-one with Kane later on in the evening, but the opening match would see Del Rio going one-on-one with The Great Khali!

Per the orders of John Laurinaitis, given via Theodore Long, the opening match of the night saw the #1 Contender for the World Heavyweight Title, Alberto Del Rio, go one-on-one with “The Punjabi Giant” The Great Khali. During the match, Ricardo Rodriguez would briefly draw the attention of The Great Khali, allowing Alberto Del Rio to get the cross armbreaker in on the giant, actually making Khali tap out to pick up the win!

Backstage, Brodus Clay and the Funkadactyls, Cameron & Naomi, are having some fun with Theodore Long before Long informs Brodus that John Laurinaitis has made the ruling that, to protect Brodus from Big Show, Brodus will no longer be allowed on RAW! In an attempt to calm “The Funkasaurus” down, Long lets Brodus know that he is now a permanent member of the SmackDown roster!

After learning that he is now exclusive to SmackDown, “The Funkasaurus” was in action on SmackDown as Brodus Clay, with the Funkadactyls in his corner, went one-on-one with Derrick Bateman. An intense Brodus Clay made easy work of Derrick Bateman, hitting the Funkasplash on Bateman en route to picking up a dominant win.

“The International Sensation” was in action on SmackDown as Sin Cara went one-on-one with Drew McIntyre. In the end, it was Sin Cara planting Drew McIntyre with a tornado DDT en route to picking up the win.

SmackDown saw the return of the talk show segment as four-time and reigning Intercontinental Champion Christian would host The Peep Show with his guest, Cody Rhodes. However, Cody Rhodes storms in the ring first, wrecking The Peep Show, before saying that he does not answer to Christian because Christian should answer to him. Rhodes continues that Christian “stole” the title from him, but the ex-champion is soon interrupted by the current champion, Christian, who reminds Rhodes that he defeated him for the Intercontinental Title. Rhodes then asks Christian who he is trying to fool, citing that Christian had no need for the fans before Over The Limit. Christian explains that he had a moment of “clarity” and, when he inducted his good friend Edge into the Hall of Fame the night before WrestleMania, it hit him that it is a “privilege” to perform in front of his “peeps”. Christian continues that he did not want his legacy to be that of a man who whined and complained, trying to get one more match, so he opted to do what he does best by “winning championships” and putting together a Hall of Fame career. Rhodes says that he knows Hall of Famers and Christian is not Hall of Fame material like he is. Rhodes then reveals that he will be cashing in his rematch clause for the Intercontinental Championship at No Way Out a week from Sunday, but Christian jumps in, saying that, while Rhodes was nice enough to start The Peep Show, he will gladly finish it by wiping the mat with Rhodes. However, Dolph Ziggler interrupts for his scheduled match against Christian.

With Cody Rhodes a guest on commentary, four-time and reigning Intercontinental Champion Christian went one-on-one with “The Show-Off” Dolph Ziggler in a non-title match. In the end, it was Christian hitting the frog splash on Dolph Ziggler en route to picking up the win as Cody Rhodes looks on.

After watching highlights of his humiliation at the hands of John Cena on RAW, the self-proclaimed “Voice of the WWE” Michael Cole stands up and says that no one is “mature enough” to move on from what happened to him on RAW, citing it as the lowest point in his career. However, Cole is interrupted by the arrival of Hornswoggle, who comes out dressed as a mini-version of Hall of Famer “Good Ol’ J.R.” Jim Ross. Hornswoggle’s mockery of Jim Ross is interrupted by the self-professed “Intellectual Savior of the Masses” Damien Sandow as Sandow says that he is the “avenging sword of taste and decency” and he will not allow the ridiculousness to continue, saying that Hornswoggle will be taught a “lesson”. As Sandow closes in on Hornswoggle, Tyson Kidd rushes in to make the save, getting the better of Sandow with Sandow opting not to face Kidd. However, Damien Sandow would see an opportunity when Kidd turns his back as Sandow assaults Kidd, laying Tyson out with the straight jacket neckbreaker before putting the smile back on his face.

Being forced to read an introduction for Antonio Cesaro and Long’s ex-girlfriend Aksana, Theodore Long introduces Cesaro’s “lover”, Aksana, and “The Rugby Ruffian” Antonio Cesaro, who went one-on-one with Jimmy Uso. In the end, it was Antonio Cesaro hitting Jimmy Uso with the Gotch Style Neutralizer en route to picking up the win. After the match, Cesaro makes Theodore Long come into the ring and raised his hand in victory before Cesaro and Aksana kiss in front of Long.

Then it was time for the main event as, nine nights before they are both involved in title matches at No Way Out, World Heavyweight Champion Sheamus went one-on-one with “The Big Red Monster” Kane in a non-title match. During the match, Alberto Del Rio and Ricardo Rodriguez rush out, but Del Rio stops short, allowing Rodriguez to take the punishment from Sheamus. The distraction gives Kane the opportunity to knock Sheamus down, but as Kane readies the chokeslam, A.J. comes out, smiling at Kane. This distracts Kane long enough for Sheamus to blast Kane with the Brogue Kick! While Del Rio opts not to face Sheamus in the ring, the World Heavyweight Champion takes it out on Ricardo Rodriguez as Sheamus lays Del Rio’s personal ring announcer out with the Brogue Kick!