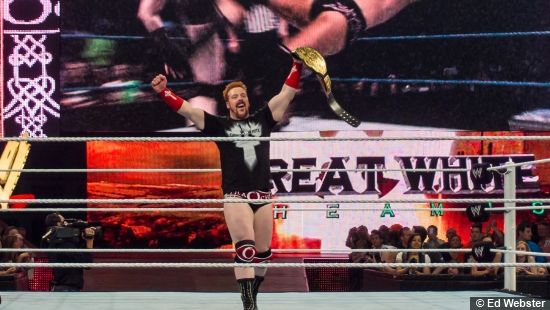 The 671st edition of WWE Friday Night SmackDown came to you from the Ford Center in Evansville, IN. After a winner could not be determined in the bizarre Contract-on-a-Pole Match between Dolph Ziggler and Alberto Del Rio on RAW, this week’s Interim General Manager, Vickie Guerrero, decreed that SmackDown would see Sheamus defend the World Heavyweight Championship against both “The Show-Off” Dolph Ziggler and “The Mexican Aristocrat” Alberto Del Rio in a Triple Threat Match! Also, after her impactful night as Interim GM on RAW, what would Vickie Guerrero have in store for her final night as Interim GM? Who will be next week’s Interim General Manager of RAW & SmackDown?

After emerging victorious in a Divas Summertime Beach Battle Royal on RAW, the unbalanced A.J. went one-on-one with Divas Champion Layla in a non-title match to kick off the show. During the match, A.J.’s former love interest, Daniel Bryan, comes out and Bryan gets a measure of payback by making his way around the ring, chanting “yes”. This distracts A.J. long enough for Layla to roll A.J. up for the win! After the match, A.J. snaps, assaulting the Divas Champion before Daniel Bryan tells A.J. to calm down, saying that he is out there because he has something very important to discuss. Bryan continues that he has something to discuss with Interim General Manager Vickie Guerrero and he wants A.J. to be out there to hear it, saying that he will hold SmackDown hostage if he has to as he will not leave the ring until Vickie comes out there. When Vickie does not show up, Daniel Bryan starts to chant “yes”, but stops the chant when he sees A.J. doing the same thing!

Vickie Guerrero finally breaks up the “yes-fest” as the Interim GM makes her way to the ring. Daniel Bryan says that he needs to make a “point”, reminding Vickie that he is the new #1 Contender for the WWE Title at Money-in-the-Bank before saying that both RAW & SmackDown will soon revolve around him. Bryan then flatters Vickie by saying that Vickie deserves to be the permanent General Manager of RAW & SmackDown, saying that they will need to work “hand-in-hand” with each other. Bryan then asks Vickie to talk to the WWE Board of Directors and get A.J. banned from ringside for the title match at Money-in-the-Bank. Vickie says that she is not a “fan” of A.J. before trying to fight A.J. Bryan intervenes, saying that it is not about them, it is about him. The Interim GM then reveals that there was a WWE.com poll and the WWE Board of Directors sided with the fans in wanting to see A.J. as the Special Guest Referee for the title match! Initially outraged, Vickie thinks twice about disagreeing with the Board of Directors and, as Daniel Bryan leaves the ring screaming “no”, Vickie claims that she fully supports the Board’s decision. The Interim GM then announces that, over the next few weeks, there will be a series of qualifying matches to determine the participants for the World Heavyweight Championship Money-in-the-Bank Ladder Match. Vickie then reveals that, unlike the WWE Championship Money-in-the-Bank Ladder Match where only former WWE Champions are eligible, the World Heavyweight Championship Money-in-the-Bank Ladder Match will be open to everyone!

The first World Heavyweight Championship Money-in-the-Bank Ladder Match Qualifying Match saw “The Long Island Iced Z” Zack Ryder go one-on-one with the self-proclaimed “Intellectual Savior of the Masses” Damien Sandow. In the end, it was Damien Sandow hitting the straightjacket neckbreaker on Zack Ryder en route to picking up the win and becoming the first Superstar to qualify for the World Heavyweight Championship Money-in-the-Bank Ladder Match.

In the second Money-in-the-Bank Qualifying Match, Tyson Kidd went one-on-one with “The All-American American” Jack Swagger. In the end, it was Tyson Kidd hitting a neckbreaker off of the top rope on Jack Swagger en route to picking up the upset win to join Damien Sandow as a participant in the World Heavyweight Championship Money-in-the-Bank Ladder Match!

In a tag team Money-in-the-Bank Qualifying Match, Intercontinental Champion Christian teams with United States Champion Santino Marella to face Cody Rhodes & David Otunga. In the end, it was Christian hitting the Spear on David Otunga en route to picking up the win for himself and Santino Marella, who both qualify for the World Heavyweight Championship Money-in-the-Bank Ladder Match.

Ryback was in action on SmackDown as the unfortunate pairing of Dan Barone & Brendan Burke would try their best to stop “The War Machine” in a 2-on-1 Tornado Handicap Match. In the end, it was Ryback hitting Shell Shocked on both men before piling both men up, pinning Brendan Burke for the win.

Backstage, Theodore Long confronts Antonio Cesaro and his girlfriend, Aksana, saying that he harbors no bad feelings for what he has been put through with the two of them. Long then reveals that he will be the Interim General Manager of both RAW & SmackDown next week! Long then informs Cesaro & Aksana that, on next week’s Super SmackDown Live: The Great American Bash, they will face The Great Khali and Divas Champion Layla in a Mixed Tag Match!

Despite being assaulted by a frustrated Tensai a few weeks ago on RAW, Sakamoto accompanied Tensai as Tensai went one-on-one with Justin Gabriel in a Money-in-the-Bank Qualifying Match. In the end, it was Tensai hitting the Tenson on Justin Gabriel en route to picking up the win and joining Damien Sandow, Tyson Kidd, Christian, and Tyson Kidd in the World Heavyweight Championship Money-in-the-Bank Ladder Match. Who will fill the final four spots in the final qualifying match this Tuesday on Super SmackDown Live?

Then it was time for the World Heavyweight Championship to be decided as Sheamus defends the gold against “The Show-Off” Dolph Ziggler and “The Mexican Aristocrat” Alberto Del Rio, with personal ring announcer Ricardo Rodriguez in his corner, in a Triple Threat Match. At the end of a hotly-contested Triple Threat Match, it was Dolph Ziggler rolling Alberto Del Rio up, but Sheamus saw an opening, delivering the Brogue Kick to a prone Dolph Ziggler en route to pinning Dolph to pick up the win and successfully retain the World Heavyweight Title!