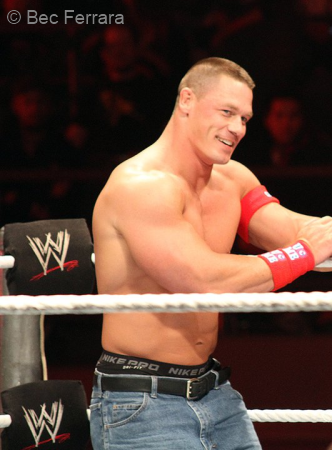 After a three year hiatus, WWE No Way Out returns as the 12th edition of No Way Out came to you, live on pay-per-view, from the Izod Center at the MetLife Sports Complex in East Rutherford, NJ. After betraying John Cena and the WWE fans at Over The Limit by assisting General Manager John Laurinaitis, earning himself an “iron-clad contract”, Big Show would face John Cena in a Steel Cage Match, but one man would not survive No Way Out with their job intact as, if Big Show loses, then John Laurinaitis will be fired by Mr. McMahon, but if John Cena loses, then Laurinaitis will fire Cena!

Amidst a bizarre love triangle between CM Punk, Kane, and A.J., CM Punk would have to focus on the task at hand as Punk defends the WWE Championship in a Triple Threat Match against “The Big Red Monster” Kane and “The Yes Man” Daniel Bryan. After Alberto Del Rio was taken out of action with a concussion, Dolph Ziggler would capitalize on a Fatal 4-Way Elimination Match opportunity to earn the right to challenge Sheamus for the World Heavyweight Championship.

For the first time since being served dual lawsuits by Brock Lesnar’s legal representation, Paul Heyman, WWE COO Triple H would appear live at No Way Out to discuss his future, not to mention the lawsuits put on him by Lesnar and Heyman.

After his surprise return at Over The Limit, winning the “People Power” Battle Royal to earn an Intercontinental Title shot, Christian took full advantage of the opportunity by winning the Intercontinental Title for the fourth time in his career, but, at No Way Out, Christian would defend the title against the man he defeated for the gold, Cody Rhodes.

The Divas Title was also up for grabs at No Way Out as Layla defends the title against “The Glamazon” Beth Phoenix.

A rare and unusual match would take place at No Way Out as United States Champion Santino Marella would face Alberto Del Rio’s personal ring announcer, Ricardo Rodriguez, in a Tuxedo Match.

Before No Way Out went live on pay-per-view, the No Way Out pre-show featured a match between “The Funkasaurus” Brodus Clay and David Otunga. Despite dealing with an injured knee, courtesy of an attack by David Otunga on SmackDown, Brodus Clay would take the fight to Otunga to the point that the Harvard Law graduate opted to take a count-out loss over having to continue competing against “The Funkasaurus”.

No Way Out officials kicks off with gold on the line as Sheamus defends the World Heavyweight Championship against “The Show-Off” Dolph Ziggler, with Vickie Guerrero in his corner. Despite the best efforts of Dolph Ziggler, Sheamus was able to put “The Show-Off” away with the Brogue Kick en route to successfully retaining the World Heavyweight Title.

Decked out in a bright red, white, and blue suit, General Manager John Laurinaitis catches up with WWE Chairman & CEO Mr. McMahon backstage, recommending that the Chairman not go out to ringside, where the bright lights may affect McMahon’s concussion. The Chairman minds Laurinaitis no mind as McMahon shuts himself in his office.

In the comedy match of the evening, United States Champion Santino Marella would face Alberto Del Rio’s personal ring announcer, Ricardo Rodriguez, in the rarely seen Tuxedo Match, where the only way to win is to strip your opponent of their tuxedo. Utilizing a hidden cobra, Santino Marella strikes with the foot cobra, allowing Santino to strip Ricardo Rodriguez down to win the match.

A surprise match at No Way Out would decide the new #1 Contenders for the WWE Tag Team Titles as Primo & Epico, with Rosa Mendes and the trio’s manager/promoter A.W. in their corner, Tyson Kidd & Justin Gabriel, Jimmy & Jey Uso, and The Primetime Players, Darren Young & Titus O’Neil, battled in a Fatal 4-Way Tag Match for the coveted spots. At the end of a chaotic match, it was A.W. who made all the difference as, with his clients, Primo & Epico, down on the outside, A.W. tosses Primo into the ring. Darren Young then hits an elevated gutbuster on Primo and, when Epico tries to save his cousin from being pinned, A.W. holds the leg of Epico, allowing The Primetime Players to pick up the win and become the new #1 Contenders for the WWE Tag Team Titles! After the match, an irate Primo & Epico confront the man who betrayed them as A.W. gets decked with a right hand. This sparks an attack by Darren Young & Titus O’Neil, who, along with A.W., clear the ring of the former tag team champions. A.W. then stands tall in the ring with the newest additions to his All World Promotions, The Primetime Players!

For the first time since being served a multi-million dollar lawsuit by Paul Heyman, courtesy of Brock Lesnar, as well as a second lawsuit by Heyman himself, WWE Chief Operating Officer Triple H appears at No Way Out. “The Game” says that he has spent half of his life in the ring and part of him did it because he never wanted to do anything else, but now he has a “real job” and a “corporate job” as well. Triple H continues that he is not accustomed to dealing with lawyers and legal terms because he is a “fighter” and an “ass-kicker”. Triple H then says that Brock Lesnar has used the same words to describe himself and the last time he saw Lesnar, Brock jumped him from behind and broke his arm. The COO then proposes that they get rid of the legal battles and the “fat, balding manager”, saying he and Lesnar should do what they were made to do and that is fight. Triple H then lays down the gauntlet, challenging Lesnar to a match at SummerSlam! Triple H concludes that Lesnar can either fight or continue to be a “quitter”. Will Brock Lesnar agree to put the legal battles aside and accept Triple H’s challenge for a match at SummerSlam?

The Divas Championship was on the line at No Way Out as Layla defends the butterfly title against “The Glamazon” Beth Phoenix. After hitting the Lay Out, Layla pinned Beth Phoenix to retain the Divas Title.

After kissing both CM Punk and Daniel Bryan on the cheek earlier in the night, A.J. confronts Kane backstage and puts a cheek kiss on “The Big Red Monster” as well, but Kane plants a kiss of his own on A.J.!

“The International Sensation” was in action at No Way Out as Sin Cara went one-on-one with Hunico, with Camacho in his corner. In the end, it was Sin Cara hitting the tilt-a-whirl armbar facebuster en route to picking up the win.

With A.J. renting space in all three Superstars’ heads, it was time for the WWE Championship to be decided as CM Punk defends the WWE Title against “The Yes Man” Daniel Bryan and “The Big Red Monster” Kane in a Triple Threat Match. During the hard-fought and chaotic match, CM Punk inadvertently shoves Kane into A.J., who had climbed on the ring apron. This distracts Kane long enough for CM Punk to catch Kane with the GTS en route to successfully retaining the WWE Title. After the match, Kane checks on A.J., carrying A.J. to the backstage area, but while Kane is carrying A.J., the unbalanced Diva looks back at CM Punk and smiles!

Ryback was in action at No Way Out as “The Undefeated Juggernaut” faced Rob Grymes & Dan Delaney in a 2-on-1 Tornado Handicap Match. It was nothing but dominance for Ryback as the unstoppable force slung the two jobbers around the ring before delivering the Double Machine Buster, piling Grymes and Delaney up, pinning Dan Delaney for the win.

Then it was time for the career-altering main event as John Cena, with WWE Chairman & CEO Mr. McMahon in his corner, would go to war with “The World’s Largest Athlete” Big Show, with General Manager John Laurinaitis in his corner, in a Steel Cage Match with the stipulation that, if Big Show loses, then John Laurinaitis will be fired, but if John Cena loses, then Cena will be fired on RAW. During the match, John Cena makes a crawl to escape the cage through the door, but John Laurinaitis jumps to his feet, closing the cage door. However, Mr. McMahon tosses Laurinaitis to the side before opening the cage door for Cena, but Laurinaitis recovers and shoves McMahon into the cage door, which makes contact with Cena’s skull! Big Show then takes advantage, hitting the chokeslam on Cena, but Cena manages to kick out.

After failing with the chokeslam, Big Show readies the W.M.D., but when Show swings, he misses Cena and connects with the referee, knocking the referee out! Then, on his second swing, Show finally connects with the W.M.D., laying Cena out! With everyone in the vicinity out of it, Big Show was ready to waltz out the cage door, but a certain funky individual was standing in his way as Brodus Clay emerges with a steel chair, daring Show to walk out of the cage and face him. Thinking he has the solution, Big Show begins to climb the side of the cage, but Brodus rushes to wait for Show on that side, so Show goes back to the door, but Brodus meets him there too. As Show tries to climb the side of the cage, Brodus signals to the back and out comes two more Big Show victims as Santino Marella and Alex Riley attempt to climb the side of the cage, but are quickly knocked to the floor by Big Show. Zack Ryder then tries his hand at getting into the cage, but Big Show delivers a big right hand to Ryder through the cage wall, knocking Ryder to the floor as well. WWE Tag Team Champion Kofi Kingston then rushes out and Kofi has the most impact by far as Kingston quickly meets Show at the top of the cage, delivering countless kicks to the skull of Big Show, knocking Show to the mat!

Cena then uses the ropes to pull himself towards the cage door, but Big Show manages to prevent Cena from escaping. However, Cena musters the strength to hoist “The World’s Largest Athlete” up and deliver the Attitude Adjustment. Unfortunately for Cena, both the referee inside the cage and the referee outside the cage are still down. With the pinfall not an option, Cena begins to climb over the cage wall, but John Laurinaitis swats at Cena with his crutch. After Brodus Clay holds the General Manager back from interfering, Cena continues his climb over the top of the cage. Meanwhile, on the other side of the cage, Big Show is slowly crawling through the open cage door, but Cena is able to reach the floor first to not only pick up an incredibly hard-fought victory, but also ensure that John Laurinaitis would be fired! After the match, John Cena instructs Brodus Clay to let Laurinaitis go and, in his final act of defiance, “Big Johnny” swings his crutch at Cena, but misses. Cena then hoists Laurinaitis up on his shoulders as Mr. McMahon grabs a microphone and informs Laurinaitis that, “John Laurinaitis, you’re fired”! With that, Cena delivers the Attitude Adjustment to the unemployed Laurinaitis through the Spanish announce table, bringing a definitive end to the tyrannical era of “People Power”!

What did you think of No Way Out? Post your comments in the box below.