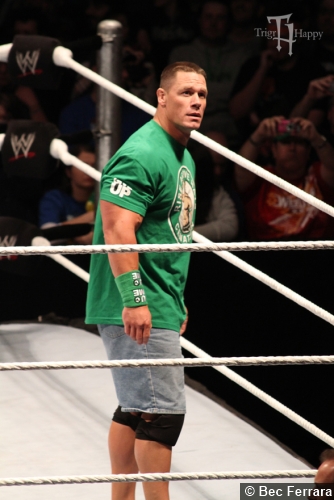 Cena gets lumberjacked and jaw jacked.

One night after a shocking Over The Limit, the 991st edition of WWE Monday Night RAW SuperShow came to you, live, from the Richmond Coliseum in Richmond, VA. After an unlikely and unforeseeable assist from the unemployed “World’s Largest Athlete” Big Show that allowed him to secure a victory over John Cena, John Laurinaitis is, shockingly, still the General Manager of RAW & SmackDown! Also, CM Punk managed to narrowly defeat Daniel Bryan at Over The Limit to retain the WWE Championship in a match that, had it gone just a second longer, would have seen Punk submit to the Yes Lock and the crowning of a new champion, but it was not to be on that night. Who will be the next Superstar to step up and challenge CM Punk for the gold?

One night after the W.M.D. of the unemployed Big Show ensured his unlikely loss to John Laurinaitis at Over The Limit, RAW kicks off with John Cena. Cena states that, when he loses a match, he usually congratulates his opponent on their victory and moves on, but he cannot do that this time. Cena repeatedly asks “what the hell?” before saying that John Laurinaitis beat him, but Cena asks “why?” Cena continues that, since Laurinaitis has been the GM, he has been a “selfish, power-hungry bully” and, at Over The Limit, he and the fans were having a “blast”. Cena then says that Laurinaitis then ran away and Big Show brought him back, saying that Show was “humiliated” and fired by the GM, but after Show fed Laurinaitis to Cena, the man he used to call a “friend” knocked him out, allowing Laurinaitis to win the match and keep his job. Cena continues that Laurinaitis deserved everything he got at Over The Limit, but he is not happy with Big Show because Show decided to “sell out” and there is “no possible explanation” and, thanks to Big Show, they are “stuck” with “People Power”. Cena then says that they are probably going to see John Laurinaitis come out and say how “brave” he is and what his plans are for the next pay-per-view.

Executive Administrator Eve then interrupts to introduce the still General Manager of RAW & SmackDown, John Laurinaitis, who comes out in a “People Power” style Hover Round scooter. The GM then uses a crutch to stand as Laurinaitis explains to Cena that he might have a broken clavicle, as well as knee and spine damage, adding that he cannot move his left arm or left leg, indicating some possible nerve damage. Laurinaitis says that he proved at Over The Limit that he is a “fierce competitor”, but outside of the ring, he is an “executive”. The GM then declares that, if any Superstar puts their hands on him, then they will be fired. Laurinaitis then introduces the man that he rehired on Saturday and gave a sizeable bonus to, as well as the man who will face John Cena at No Way Out on June 17, “The World’s Largest Athlete” Big Show. Big Show says that he is sure that Cena and the fans want to hear his explanation for his actions, but they do not deserve to hear it. Show continues that no one loves the business more than he does and he found himself crying on his knees in front of Laurinaitis last week to try and keep his job. Big Show says that he got “no sympathy” from the fans and he did what any one of them would have done and now he has an “iron clad contract” and he is proud of it. Show then criticizes Cena and the fans for “judging” him before saying that there will be “no way out” for Cena on June 17 because he will knock Cena out at No Way Out.

Big Show then makes his exit before Laurinaitis’ legal counsel, David Otunga, makes his entrance, saying John Cena is going to lose to him. Cena then warns the Harvard Law graduate that, if Otunga gets in the ring, then Cena will hurt him, but the lawyer still accepts the match to go one-on-one with the irate John Cena. After trying to avoid John Cena throughout the match, David Otunga would eventually get caught by Cena as Cena hits the Attitude Adjustment on the Harvard Law graduate before forcing Otunga to tap out to pick up the win. Immediately after the match, John Cena is blinded by an attack from Curt Hawkins, Tyler Reks, Darren Young, & Titus O’Neil! However, the World Heavyweight Champion makes the save as Sheamus plows past John Laurinaitis to help Cena out as Sheamus and Cena clear the ring of the four Superstars. Laurinaitis then asks all four of them what they are doing as he did not tell them to be out there before the GM orders the foursome to head to the back. John Laurinaitis then announces that John Cena and Sheamus will compete in the first ever 3-on-2 Handicap Lumberjack Match! Who will Cena and Sheamus be forced to compete against?

Ricardo Rodriguez then started to introduce his employer, Alberto Del Rio, but he is interrupted by United States Champion Santino Marella, who makes fun of Rodriguez’s accent and eyebrows before the two face-off in a battle of rolling their r’s. The United States Champion then strikes Ricardo down with the Cobra Strike before doing the honors of introducing Alberto Del Rio himself.

After both men failed to win the World Heavyweight Title in the Fatal 4-Way at Over The Limit, “The Mexican Aristocrat” Alberto Del Rio went one-on-one with “The Viper” Randy Orton. During the match, Randy Orton was ready to finish Alberto Del Rio off with the RKO when Chris Jericho emerges, laying Orton out with the Codebreaker! Jericho then repeatedly tells Orton that he is “the best in the world at everything I do” before hitting a second Codebreaker on Orton and shouting at Orton some more. Jericho then leaves the ring, but decides to come back to deliver a third Codebreaker to “The Viper”. What is Chris Jericho’s problem and how will Randy Orton respond?

After finding himself pinned to the match just a mere second before CM Punk tapped out, narrowly missing out on winning the WWE Title at Over The Limit, “The Yes Man” Daniel Bryan appeared on RAW to call out the WWE Champion, CM Punk. Daniel Bryan states that there was a “great injustice” at Over The Limit as he should be the WWE Champion. Bryan then shows altered footage of CM Punk tapping out to the Yes Lock after the match was over. Bryan then says that he made Punk tap out, he should be the WWE Champion, and, if he faces Punk again, he will make Punk tap out. Bryan continues that the only reason he is not the champion is because of the “gross incompetence” of one referee before demanding that he get a rematch for the WWE Title. WWE Champion CM Punk then comes out, admitting that his match against Bryan was one of the “greatest battles” in his career before reminding him that he pinned Bryan in the center of the ring at Over The Limit. The WWE Champion then states that, while he would love to face Bryan in a rematch, Bryan already has an opponent before CM Punk introduces Bryan’s opponent, “The Big Red Monster” Kane!

With WWE Champion CM Punk a guest on commentary, “The Yes Man” Daniel Bryan went one-on-one with “The Big Red Monster” Kane. During the match, CM Punk gets a measure of revenge for what Daniel Bryan did to Punk on SmackDown as Punk readies himself to hit Kane with a steel chair, but allows Bryan to take the chair away. Kane then sees Daniel Bryan with the chair and responds by taking the chair and unloading with chair shots on Bryan before laying Bryan out in the center of the ring with two vicious chokeslams! CM Punk then goes in to “check” on Bryan as the WWE Champion locks Bryan in the Anaconda Vise, making Bryan tap out.

Backstage, the unbalanced A.J. catches up with WWE Champion CM Punk as A.J. tells Punk that she really enjoyed seeing Punk beat up her ex, Daniel Bryan. The WWE Champion tells A.J. that she has to know that she has been the one acting like a “fool” this entire time, which makes the Diva cry, leaving Punk no choice but to hug A.J. and try to calm her down. Punk then tells A.J. to stop crying and she does so immediately before Punk says that he digs crazy chicks.

After his surprising return where he won the “People Power” Battle Royal to earn a title shot against Cody Rhodes and subsequently defeated Rhodes to win the Intercontinental Title, new Intercontinental Champion Christian went one-on-one with Jinder Mahal in a non-title match. In the end, it was Christian hitting his patented frog splash on Jinder Mahal en route to picking up the win.

Still without the Divas Title after failing to defeat Layla at Over The Limit, “The Glamazon” Beth Phoenix went one-on-one with Kelly Kelly on RAW. In the end, it was Beth Phoenix planting Kelly Kelly with the Glam Slam en route to picking up the win.

Then it was time for the main event as John Cena teamed with World Heavyweight Champion Sheamus to face the team of the undefeated Tensai and Dolph Ziggler & Jack Swagger opponents in the first ever 3-on-2 Handicap Lumberjack Match with plenty of anti-Cena and anti-Sheamus Superstars serving as lumberjacks. During the match, all hell would break loose as every lumberjack joins Tensai, Dolph Ziggler, & Jack Swagger in assaulting Sheamus and John Cena. However, the WWE locker room would empty out to assist Cena and Sheamus as WWE Champion CM Punk, Intercontinental Champion Christian, United States Champion Santino Marella, Brodus Clay, The Great Khali, Ezekiel Jackson, WWE Tag Team Champions R-Truth & Kofi Kingston, and several others even the odds. While the brawl continues in the ring, John Cena slips out of the ring to hunt for Big Show backstage, but Cena finds John Laurinaitis, who claims to not know where Big Show is at, but as soon as Cena turns away from Laurinaitis, Big Show levels Cena with the W.M.D., leaving Cena knocked out on the concrete floor!