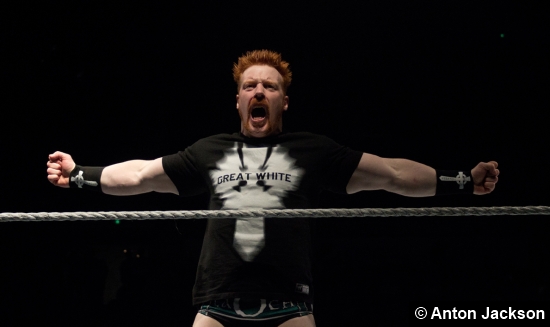 Two nights before Extreme Rules, the 662nd edition of WWE Friday Night SmackDown came to you from the Van Andel Arena in Grand Rapids, MI. Before he defends the World Heavyweight Title against Daniel Bryan in a 2-out-of-3 Falls Match at Extreme Rules, World Heavyweight Champion Sheamus would go one-on-one with “The World’s Strongest Man” Mark Henry in a non-title match. Also, Michael Cole would conduct a special interview with “The Viper” Randy Orton before Orton’s Falls Count Anywhere showdown with Kane at Extreme Rules.

With Josh Mathews absent from the announce position following his injury at the hands of Brock Lesnar on RAW, the show kicks off with “The Yes Man” Daniel Bryan, two nights before he challenges Sheamus for the World Heavyweight Title in a 2-out-of-3 Falls Match at Extreme Rules. Daniel Bryan states that he “cut the umbilical cord” by getting rid of A.J. before saying that his eighteen second loss to Sheamus at WrestleMania “does not count” and the loss should go on A.J.’s record because she lost and he did not. Bryan continues that Sheamus walks around with the title like he “won something”, saying that Sheamus cannot even beat him once, much less twice. Bryan then claims that, when he was the Special Referee for Sheamus’ match against Mark Henry on RAW, he called it “right down the middle”. Bryan continues that people have accused him of fast-counting Mark Henry’s pin on Sheamus, but Bryan shows some altered footage from RAW where his count was shown in slow motion. Bryan then says that, after the match on RAW, he was “forced” to defend himself by blindsiding Sheamus and locking the World Heavyweight Champion in the Yes Lock. Bryan continues, claiming that he made Sheamus tap out, saying that Sheamus’ title run is a “fluke” because Sheamus took advantage of a “not very intelligent woman”, adding that he will regain the World Heavyweight Title at Extreme Rules.

The “yes” fest is then interrupted by “The Mexican Aristocrat” as Alberto Del Rio, with Ricardo Rodriguez in tow, says that Bryan has been making “excuses” since losing the World Heavyweight Title in eighteen seconds at WrestleMania. Del Rio then states that Daniel Bryan will be “forgotten” when he is crowned the new World Heavyweight Champion. Del Rio is then interrupted by the arrival of the Intercontinental Champion, Big Show, who fakes out both Daniel Bryan and Alberto Del Rio by raising his fist, making Bryan and Del Rio scatter. However, the Intercontinental Champion gets a hold of Del Rio’s personal ring announcer, Ricardo Rodriguez, planting Del Rio’s right hand man with a chokeslam!

The opening match of the night was a rematch from last week’s SmackDown as the Intercontinental Champion, Big Show, went one-on-one with “The Mexican Aristocrat” Alberto Del Rio in a non-title match. During the match, Big Show looked ready to chokeslam Alberto Del Rio, but Big Show’s Extreme Rules opponent, Cody Rhodes, attacks the Intercontinental Champion from behind. Rhodes then goes under the ring, grabbing a kendo stick and a steel chair, but neither weapon has an effect on the giant. After trying to use his belt against Big Show, the angry big man gets a hold of the belt, taking the hide off of Rhodes before Rhodes bolts from the ring. With the stipulation for their match to be determined by the spin of a wheel during the Extreme Rules pre-show, what match will Big Show and Cody Rhodes square off in? Who will walk out of Chicago as the Intercontinental Champion?

Backstage, General Manager John Laurinaitis is conversing with his new Executive Administrator, Eve, as Laurinaitis tells Eve that, if there is anything she wants to see changed, then she should tell him. Eve comes up with the idea to make the various crew members wear nametags. Theodore Long then confronts the GM, asking what his position is and Laurinaitis says that Long is simply his “employee” and, from now on, Long should report directly to Eve. Upon hearing this, Eve tells Long to go and put on a nametag.

After taking advantage of Beth Phoenix’s severe ankle sprain to be crowned the new Divas Champion on RAW, new Divas Champion Nikki Bella, with Brie Bella in her corner, went one-on-one with Alicia Fox in a non-title match. During the match, the referee would check on Alicia Fox, allowing Nikki Bella to switch with her twin sister, Brie Bella, allowing Brie to hit the Bella Buster on Fox en route to picking up the win for her sister. Will The Bella Twins be able to pull off Twin Magic at Extreme Rules when Nikki Bella defends the Divas Title against former champion Beth Phoenix? What condition will Beth Phoenix be in for the match?

Backstage, Theodore Long is in a maid’s outfit with a giant nametag on the front when Aksana enters the room before John Laurinaitis & Eve breaks things up to inform Aksana that her old friend, Antonio Cesaro, will get a tryout match and if the GM likes what he sees, he will sign Cesaro to SmackDown. Laurinaitis then informs Aksana that she will be the guest ring announcer for Cesaro’s match. Executive Administrator Eve then informs Theodore Long that Long will be added to the announce team in the absence of Josh Mathews as Long will be at the “Teddy Table”. The GM then tells Long that he will be backstage telling Long what to say and Long will not speak unless the GM tells him to!

Before he faces Kane in a Falls Count Anywhere Match at Extreme Rules, “The Viper” Randy Orton took part in a special in-ring interview with Michael Cole. Before the interview officially got underway, Cole revealed that John Laurinaitis has ruled that, if any Superstar puts his hands on an announcer, then that Superstar will be suspended! Cole then asks Orton how he feels about facing a monster that Orton created with his “failures at WrestleMania”. Orton states that, at Extreme Rules, he will go above and beyond simply pinning Kane. Orton continues that there is nothing holding him back from making Kane “suffer” at Extreme Rules and even Kane is incapable of dishing out the “hell” that he plans to dish out on Kane. Jinder Mahal then interrupts the interview, telling Orton that Orton and Kane will take each other down, paving the way for a new Superstar to rise up. Mahal then says that he will be waiting for Orton on the “other side”. Orton then asks Jinder if he is an announcer and, when Mahal says he is not, Orton strikes, planting Jinder Mahal with the RKO! When Randy Orton and Kane collide in a Falls Count Anywhere Match at Extreme Rules, which diabolical Superstar will emerge as the winner?

With Aksana serving as the guest ring announcer, Aksana’s longtime friend and former Rugby star Antonio Cesaro had his tryout match against Tyson Kidd on SmackDown. In the end, it was Antonio Cesaro flattening Tyson Kidd with the Gotch Style Neutralizer en route to picking up an impressive win. After the match, at the behest of John Laurinaitis, Theodore Long is forced to enter the ring and raise the hand of Antonio Cesaro before Cesaro and Aksana lock lips in the middle of the ring, right in front of a heartbroken Theodore Long!

“The Juggernaut” was in action on SmackDown as Ryback faced the unknown Jacob Kaye, who proclaims that he has been trying to “escape” Grand Rapids, vowing that he will be the first man to defeat Ryback. In another dominant performance, Ryback lays waste to Jacob Kaye with the modified muscle buster en route to picking up the win.

Backstage, Matt Striker tries to get an interview with the unhinged A.J., but A.J.’s longtime friend, Kaitlyn, breaks up the interview. Kaitlyn tells A.J. that Daniel Bryan did not “respect” or “love” her and that Bryan did “nothing” for her. A.J. responds by slapping Kaitlyn across the face, but immediately looks regretful for doing so.