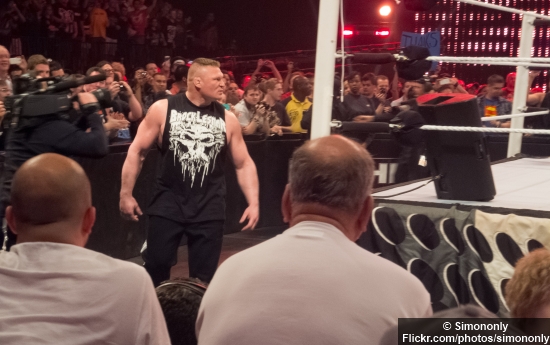 The 986th edition of WWE Monday Night RAW SuperShow came to you, live, from the Verizon Center in the nation’s capital of Washington, D.C. One week after the return that shocked the world and shook the WWE to its foundation as “The Freak” Brock Lesnar returned to the WWE after an eight-year hiatus as the three-time WWE Champion dropped John Cena with the F-5! How will John Cena respond to this shocking return, as well as being laid out with the F-5 by Brock Lesnar. After losing to Mark Henry via count-out last week to retain the WWE Title moments before Chris Jericho assaulted him and busted a liquor bottle over his skull, leaving him with contusions, CM Punk would be forced to defend the WWE Championship in a rematch as, per the orders of RAW & SmackDown General Manager John Laurinaitis, Punk will defend the WWE Title against Mark Henry. RAW would also see an appearance by the stars of “The Three Stooges”, which hits theaters nationwide this Friday, as Sean Hayes, Will Sasso, and Chris Diamantopoulos will appear as the Guest Stars of RAW.

The show kicks off with RAW & SmackDown General Manager John Laurinaitis and his legal counsel, David Otunga. The GM says that he is there to introduce the “new face” of the WWE, a man who is not about “catchphrases”, a “ruthless athlete” who will carry the WWE banner for “years to come”. Laurinaitis then shows video of what happened last week, where Brock Lesnar made his shocking return to the WWE, laying John Cena out with the F-5 in the center of the ring. After showing the clip, Laurinaitis announces that Lesnar and Cena will go one-on-one at Extreme Rules in three weeks, saying Lesnar will bring “legitimacy back to the WWE” before introducing “The Beast” himself as three-time WWE Champion Brock Lesnar makes his way to the ring. Lesnar shakes the hand of Laurinaitis before grabbing a microphone and thanking Laurinaitis for having the “wisdom” to bring legitimacy back to the WWE. Before Brock can continue, he interrupted by the arrival of his Extreme Rules opponent, John Cena. Without speaking a single word, Cena walks up to Lesnar, slapping Brock across the face! This sparks a brawl between Brock and Cena, a brawl that draws out every available referee, agent, and Superstar to pull the two apart, but Cena and Lesnar repeatedly break free, forcing the group to pull Lesnar out of the ring, finally restoring peace for the time being and leaving Cena with a bloody mouth! What will happen at Extreme Rules when Brock Lesnar and John Cena collide again, this time in a sanctioned one-on-one match?

Backstage, General Manager John Laurinaitis blames his new employee, Theodore Long, for not keeping an eye on John Cena and orders Long to get an explanation from Cena.

The unusual new team of Brodus Clay & Santino Marella was in action on RAW as “The Funkasaurus” and the United States Champion faced “The Show-Off” Dolph Ziggler & “The All-American American” Jack Swagger, with Vickie Guerrero in their corner, in the opening match of the night. In the end, it was Brodus Clay flattening Dolph Ziggler with the big splash en route to picking up the win for himself and Santino Marella.

Backstage, Theodore Long brings John Cena in to see John Laurinaitis as Cena tells the GM that he had to go out and get a “monster” in Brock Lesnar to try and take Cena out, but he will “handle” his business at Extreme Rules. Cena then tells Laurinaitis that he wants to compete tonight and he will face anyone that the GM will put in front of him in any circumstance Laurinaitis wants. Cena then exits Laurinaitis’ office and the GM tells Long to find David Otunga and inform Otunga that he will face Cena tonight.

Still reeling from losing the Intercontinental Title to Big Show at WrestleMania eight nights earlier, Cody Rhodes went one-on-one with R-Truth on RAW. During the match, Cody Rhodes hits the Alabama Slam on R-Truth, but Big Show comes out to show Cody Rhodes a clip of Show costing him a match last week. Just like last week, the video distracts Rhodes long enough for R-Truth to hit the Little Jimmy on Rhodes en route to picking up the win.

After his dominant debut last week against Alex Riley, “The Disaster Lord” Lord Tensai, with his desi Sakamoto in his corner, went one-on-one with the Japanese-born Yoshi Tatsu on RAW. Much like last week, Lord Tensai hit the Disaster Bomb on Yoshi Tatsu, leaving Tatsu unable to continue as the referee calls for the bell, giving Tensai the victory. After the match, Lord Tensai spews mist onto his hand before clawing the skull of Yoshi Tatsu and slamming Tatsu’s skull onto the mat!

Despite being physically and psychologically scarred by Chris Jericho and a bottle of liquor, which he dumped on his face and smashed the bottle on the back of his skull, WWE Champion CM Punk appears on RAW prior to his title defense. The WWE Champion says that he understands that not everyone gets what straightedge is all about, but he chose to be straightedge, adding that it is a “way of life”. Punk continues that he has tried to keep his reasons for being straightedge a secret and he always told himself that he would make it to the top of the WWE by being the “best damn wrestler in the world”. Punk then says that Chris Jericho tries to get inside of his head, but when that failed, Jericho decided to expose Punk’s secrets of an alcoholic father and troubled sister, but that also failed as Punk made Jericho tap out at WrestleMania. Punk continues that Jericho took it “one step too far” last week by pouring whiskey all over him and smashing a bottle on the back of his head, saying that there was only “one thought” that went through his head and that was that he smelled just like his father did. Punk is then interrupted by Chris Jericho, who appears on the big screen, asking if Punk is still “hung over” and if he is “tipsy”. Jericho then accuses Punk of being in “denial” and telling Punk that the WWE Champion needs to admit that he has a problem, saying that the fans see Punk as a “pathetic, living, breathing loser”. Jericho continues that, last week, he forced Punk to understand what it means to be “CM Drunk”. Punk tells Jericho that Jericho cannot “break” him and that Jericho has made the “biggest mistake” of his life as Punk will use his dark side to come after Jericho because it is no longer about him being the “best in the world”, it is about kicking Jericho’s “ass”!

After being fired up by the words and insults of Chris Jericho, CM Punk defends the WWE Championship against “The World’s Strongest Man” Mark Henry in a rematch from last week. It did not take long for CM Punk to lose his temper as, after the match spills to the outside of the ring, Punk grabs a monitor from the announcer’s desk, driving it into the mid-section of Mark Henry, forcing the referee to call for the disqualification, keeping the WWE Title with Punk. After the match, Punk would hit Henry in the back with the monitor, but before the WWE Champion could continue the assault, Chris Jericho comes out with two cases of beer in hand. With CM Punk distracted by the arrival of Chris Jericho, Mark Henry attacks Punk from behind, driving Punk spine-first into the ring apron. Henry then rolls Punk into the ring, planting the WWE Champion with the World’s Strongest Slam in the middle of the ring, following it up with a second World’s Strongest Slam. After Mark Henry leaves the ring, Chris Jericho opens a beer and is about to pour it on the champion, but Punk briefly fights back before getting dropped with the Codebreaker. With the WWE Champion down and out again, Jericho dumps can after can of beer all over CM Punk. The doused champion then uses the ropes to get back to his feet, only to get dropped by another Codebreaker by Jericho, who then exits the ring and holds Punk’s WWE Title high before sliding the title into the ring. How will CM Punk respond to being doused in alcohol by Chris Jericho for the second week in a row?

After returning to action on SmackDown, defeating Sheamus by the most devious of disqualifications to earn a future World Heavyweight Title shot, “The Mexican Aristocrat” Alberto Del Rio went one-on-one with “The Long Island Iced Z” Zack Ryder on RAW. In the end, it was Alberto Del Rio locking in the cross armbreaker on Zack Ryder, forcing Ryder to tap out to pick up the win.

Then it was time for the Guest Stars of RAW to appear as The Three Stooges make their way to the ring. Moe and Larry come out before Curly comes out dressed as Hulk Hogan, doing an impeccable “Hulkster” impersonation before The Three Stooges’ hijinks are interrupted by a man with no sense of humor, “The Big Red Monster” Kane! As Moe and Larry waste no time in abandoning Curly, Kane plants “Curly Hogan” with a chokeslam!

In a backstage interview, Mark Henry reveals that John Laurinaitis has granted him a third WWE Title match against CM Punk on next week’s RAW in London, but this time, there will be no disqualifications! Will the third time be the charm for Mark Henry next week or will CM Punk find a way to pin or make Mark Henry submit to retain the WWE Title?

In a backstage interview, Brock Lesnar says he is “proud” of everything he does, saying that, eight years ago, he took the WWE to heights it had never experienced before as the WWE Champion, but then he left the company and became a UFC Champion. Lesnar continues that he is “proud” that John Laurinaitis was wise enough to bring him back and put him at the top of the company, where he belongs. Lesnar then says that John Cena could not hold his “jock strap” in a million years. Brock continues that he is not there to make friends as he is a “war machine” and an “ass-kicker” and that the WWE brass and the fans are glad to see him back.

After getting his mouth busted open by Brock Lesnar in an overly intense brawl earlier in the night, an angry and determined John Cena went one-on-one with David Otunga, with General Manager John Laurinaitis in his corner. In the end, it was John Cena hitting the Attitude Adjustment on David Otunga before locking in the STF on Otunga, forcing Otunga to tap out to pick up the win. Immediately after the match, Brock Lesnar would come from behind, catching John Cena with a low blow before once again dropping Cena with the F-5, which puts a smile on the face of John Laurinaitis! After being brought back to the WWE by John Laurinaitis, is Brock Lesnar now doing the General Manager’s bidding or is Lesnar simply out for his own cause of regaining the top spot in the WWE?