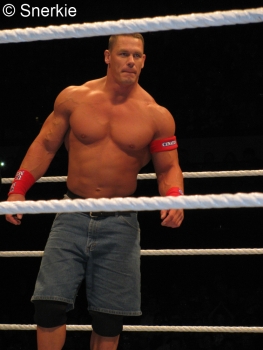 One night after the most extreme edition of Extreme Rules in recent history, the 989th edition of WWE Monday Night RAW, starring Brock Lesnar came to you, live, from the Nutter Center at Wright State University in Dayton, OH. After a secretive conversation between RAW & SmackDown General Manager John Laurinaitis and WWE COO Triple H during last night’s Extreme Rules, Laurinaitis revealed that “The Game” will be on RAW to confront the General Manager. Also, after John Cena narrowly survived his bloody war with Brock Lesnar at Extreme Rules, “The Leader of the Cenation” alluded to possibly taking some time off from the WWE, but have we truly seen the last of John Cena for the foreseeable future?

After his hand-picked new “face of the WWE” Brock Lesnar lost an Extreme Rules war against John Cena, the show kicks off with RAW & SmackDown General Manager John Laurinaitis. The GM proclaims that he revolutionized the WWE in one night and the fans should thank him for bringing the man who will be the face of the WWE for many years to come and the man who beat John Cena to the point that Cena will never be the same again, adding that Cena has been revealed as a “mere mortal”. Laurinaitis then introduces the man who brought “legitimacy” back to the WWE as “The War Machine” Brock Lesnar makes his way to the ring. Brock states that, at Extreme Rules, the world got to witness him “bring the pain”, just like he told everyone he would do. The GM then starts to speak, but he is interrupted by the arrival of the Chief Operating Officer of the WWE, “The Game” Triple H, who steps in the ring, coming face-to-face with John Laurinaitis and Brock Lesnar, both of whom he shakes hands with. Laurinaitis says that he is sure Triple H is out there to congratulate Brock on being the new face of the WWE. Triple H says that he is out there to do what Laurinaitis does not have the “guts” to do. The COO then tells Brock Lesnar that Brock’s days of “holding up the WWE are through”, saying that if Brock wants a limousine or private jet, he will have to pay for it himself. Triple H continues that the name of the show will always be Monday Night RAW, saying that no one is bigger than the WWE. Triple H then says that they will be happy to adhere to the original contract that Brock signed when he returned to the WWE, the one without the outrageous perks that John Laurinaitis agreed to last week, even though he did not have the “authority” to do so! Laurinaitis argues that, as the Executive Vice President of Talent Relations, he is responsible for all of the contracts and he re-did Brock’s contract in the “fairness” of the WWE, adding that he does not think they should go back on their word. Triple H responds by ripping up Brock’s new contract before saying that Brock is a “shrewd businessman” and that is why Brock knows that his demands would not hold up. Triple H continues that he and the fans want Lesnar in the WWE and they want to see Brock in a rematch with John Cena, as well as matches with the other top talent in the WWE and he will do so under his original contract. The COO says that he understands if Brock does not want to re-sign with the WWE and take his loss to John Cena and “go home”.

Triple H then asks Brock Lesnar for his decision, telling Lesnar to forget about John Laurinaitis, it is between the two of them. Laurinaitis keeps interrupting, but Triple H finally tells the General Manager to “shut up” before asking Brock again what his decision. For the third time, Laurinaitis interrupts, telling Triple H that he thinks he is being “disrespectful” and he may have to discuss things with the WWE Board of Directors. The COO then turns around to address John Laurinaitis, but when he does, he is blindsided by Lesnar! Triple H manages to fight back, but Brock Lesnar overwhelms “The Game” before Brock locks in the Kimura Lock on Triple H, wrenching the arm of the COO, leaving the limb useless. Sheamus, Big Show, R-Truth, and Kofi Kingston rush to the ring and run Brock from the ring, but the damage was already done as Triple H screams to the doctors that his arm is broken! As Brock is escorted out of the area, the Superstars assist Triple H from the ring. What will be the ramifications of Brock Lesnar’s heinous assault on Triple H? How severe is the injury to the COO?

The Executive Administrator for John Laurinaitis, Eve, appears on the stage to announce that, to determine a new #1 Contender for the WWE Championship, there will be a series of Beat The Clock matches with the Superstar who wins in the quickest time with the winner challenging CM Punk for the WWE Title at WWE Over The Limit.

The first Beat The Clock Challenge Match saw a rematch from the Extreme Rules pre-show as United States Champion Santino Marella went one-on-one with The Miz in a non-title match. In the end, it was The Miz planting Santino Marella with the Skull Crushing Finale en route to pinning the United States Champion and setting the time to beat at 4:18. Who else will be a part of the Beat The Clock Challenge? Will any of the involved Superstars beat The Miz’s time or will The Miz earn a WWE Title match at Over The Limit?

Then it was time for the second Beat The Clock Challenge match as ex-challenger Chris Jericho went one-on-one with the now former Intercontinental Champion, “The World’s Largest Athlete” Big Show with a time to beat of 4:18. During the match, both Chris Jericho and Big Show battle on the outside and, after using Show’s own momentum to send him over the ringside barricade, Jericho rushes back in the ring, but as the referee reaches his ten-count, the clock expires. Despite this, the referee makes the questionable call to award the match to Chris Jericho via count-out! However, upon further review, it was established that the clock expired before the completion of the ten-count, therefore, neither Show nor Jericho beat the clock and The Miz keeps the time to beat of 4:18.

Coming off the heels of a Falls Count Anywhere victory over Kane at Extreme Rules, “The Viper” Randy Orton went one-on-one with “The All-American American” Jack Swagger, with Vickie Guerrero in his corner, in a Beat The Clock Challenge match with the time to beat still set at 4:18. With two seconds to spare, Randy Orton strikes with the RKO, pinning Jack Swagger to pick up the win and setting the time to beat at 4:16!

The WWE Tag Team Titles were up for grabs on RAW as Primo & Epico, with Rosa Mendes in their corner, defends the titles against R-Truth & Kofi Kingston. During the match, Rosa Mendes would get on the apron of the ring, distracting the referee, but the distraction would backfire as R-Truth would hang Epico up on the top rope before Kofi Kingston hits Trouble in Paradise on Epico en route to pinning Epico to win the WWE Tag Team Titles for himself and R-Truth!

During the WWE Tag Team Title match, it was revealed by RAW commentator Michael Cole that former Divas Champions The Bella Twins, Brie Bella & Nikki Bella, had been fired from the WWE! What did The Bella Twins do to get fired? Will we ever see Brie & Nikki again?

Two giants would clash in the next Beat The Clock Challenge match as “The Big Red Monster” Kane went one-on-one with “The Punjabi Giant” The Great Khali with a time to beat of 4:16. In the end, both monsters have each other by the throat, both trying to set up their finishing move, but time expires before either man gets a chance to finish the match, keeping the time to beat at 4:16.

One night after emerging unsuccessful in a stellar 2-out-of-3 Falls Match for the World Heavyweight Title against Sheamus, “The Yes Man” Daniel Bryan went one-on-one with RAW commentator and WWE Hall of Famer Jerry “The King” Lawler in the final Beat The Clock Challenge match with a time to beat of 4:16. In the end, Daniel Bryan locks in the Yes Lock on Jerry “The King” Lawler, forcing the Hall of Famer to submit with just under two minutes remaining, meaning that Daniel Bryan will challenge CM Punk for the WWE Championship in three weeks at Over The Limit! Who will survive this battle of technical greats and walk out of Raleigh as the WWE Champion?

After narrowly surviving the most hellacious match of his career against Brock Lesnar at Extreme Rules, John Cena appears on RAW with his arm in a sling. Cena says that he expected to be in an emergency room with a cast on for a broken arm, but he was able to avoid any tears or breaks in his shoulder. Cena continues that there is a big difference between being “injured” and being “hurt” in the WWE, explaining that being injured gets you sent home while being hurt means you will be in pain, but can still work. Cena is then interrupted by General Manager John Laurinaitis and Cena asks the GM if Laurinaitis got him “Zeus” as his opponent for Over The Limit. Laurinaitis then claims that, by calling Brock Lesnar the new face of the WWE, he was trying to “motivate” Cena, saying he was trying to push Cena to the “limit”. Cena sarcastically “thanks” Laurinaitis, but the GM tells Cena that Cena should be trying to “build a relationship” with him because he can make Cena’s life “very easy or very difficult”. Cena says that the only thing that is “difficult” right now is listening to Laurinaitis run RAW down in the name of “people power”. Laurinaitis says that he is willing to put the past behind them and look to the future before the GM reveals Cena’s opponent in three weeks at Over The Limit, none other than the man who defeated him two weeks ago, “The Lord of Disaster” Lord Tensai! Tensai, along with Sakamoto, make their way to the ring, but as Cena anticipates an attack from Lord Tensai or Sakamoto, John Laurinaitis pops Cena in the back of the skull with a microphone before revealing that Cena’s Over The Limit opponent is actually the General Manager himself, John Laurinaitis! Sakamoto then delivers a kick to Cena’s injured arm before Laurinaitis sends Cena shoulder-first into the turnbuckle. Lord Tensai then picks the bones, using all of his weight to squash the bad shoulder with a senton. Laurinaitis then rips the sling off of Cena’s arm, repeatedly striking the bad limb before Tensai and Sakamoto position Cena with his bad arm on the steel steps. The GM then stomps on the arm of Cena before grabbing a steel chair and using it to smash Cena’s arm between the chair and the steel steps! Laurinaitis then mocks Cena before leaving Cena writhing in the middle of the ring. After having his arm further mangled at the hands of John Laurinaitis, Lord Tensai, and Sakamoto, will John Cena even be able to face the General Manager at Over The Limit? What will be the backlash of John Laurinaitis actually assaulting one of his own talents?