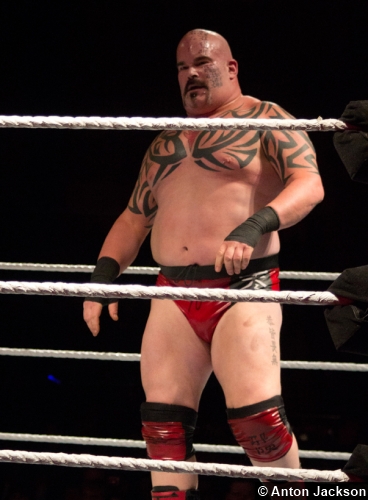 Tensai’s most extreme win yet.

The 987th edition of WWE Monday Night RAW came to you from the O2 Arena in London, England. After getting counted out two weeks ago and disqualified last week, CM Punk would, once again, be forced to defend the WWE Championship against “The World’s Strongest Man” Mark Henry in a match with no disqualifications and no count-outs. Also, now that their huge match at Extreme Rules will now be contested as an Extreme Rules Match, what will happen next in the intense rivalry between Brock Lesnar and John Cena?

The RAW SuperShow in London kicks off in a major way as the WWE Championship was on the line as CM Punk defends the WWE Title against “The World’s Strongest Man” Mark Henry in a match with no disqualifications and no count-outs. After going back-and-forth throughout the match, CM Punk would use the match stipulation to his advantage as Punk picks up a steel chair, delivering a jab to the mid-section and a flat shot to the chest of Mark Henry with the steel, but Henry manages to kick out. Henry then counters with a kick to the mid-section of Punk before Henry gets his hands on the chair, delivering a vicious shot to the back of the champion, setting the steel chair up between the turnbuckles in the corner of the ring, but Punk is able to fight back. Shortly after this, Henry charges Punk in the corner, but Punk moves out of the way, which results in Henry’s skull colliding with the steel. Then, in a truly incredible and innovative move, Punk uses the steel chair to aid him in a steel-aided elbow drop on Mark Henry en route to pinning Henry and retaining the WWE Title!

After the match, Chris Jericho appears on the big screen as Jericho looks to be in a local pub. Jericho states that he cannot tell if it is his location that reeks of beer or if it is CM Punk. Jericho then reveals that due to his “domination” over Punk over recent weeks, he will challenge CM Punk for the WWE Championship at Extreme Rules in a Chicago Street Fight in Punk’s hometown! Punk tells Jericho that, at Extreme Rules, he will get to kick Jericho’s ass in front of his friends and family. Jericho tells Punk to show up to Extreme Rules sober before Jericho shows footage of CM Punk walking in and out of a local pub before RAW. Punk tells Jericho to come to the ring and smell his breath for himself, saying that, just because he is straightedge, it does not mean he cannot go to a pub and see some friends. Jericho argues that Punk likes to be surrounded by alcohol, saying that Punk’s straightedge lifestyle is a “façade” and, in two weeks, Punk will lose it all when he loses the WWE Championship. When CM Punk gets his hands on Chris Jericho in a Chicago Street Fight at Extreme Rules in two weeks, will Punk get his payback or will Jericho walk out of Punk’s hometown as the WWE Champion?

The United States Championship was also on the line in London as Santino Marella defended the gold against John Laurinaitis’ right hand man, David Otunga. Early on in the match, David Otunga thought he defeated Santino Marella, but Santino was able to get his foot on the rope. This sparks an argument between Otunga and the referee that allows Santino to take advantage by hitting the Cobra Strike en route to picking up the win and retaining the United States Title.

Before he faces John Cena in an Extreme Rules Match in two weeks at Extreme Rules, Brock Lesnar had some poignant things to say about Cena in a controversial interview. Brock states that he is not a Superstar; he is an “ass-kicker”, saying that no one in the WWE has the accolades that he does. Lesnar continues that WWE “needed” him and he had a dominant first run in the WWE. Lesnar then says that he left the WWE and joined UFC and proved everyone wrong by becoming the UFC Champion. Lesnar then says that he came back to the WWE for himself and his return is “strictly business”, saying that he returned to “legitimize” the WWE. Brock then says that Cena is not the “real guy” and the only reason that Cena is in the spot that he is in is because Lesnar left. Brock continues that, if he was in the WWE for the last eight years, then Cena would be the guy carrying Brock’s bags right now. Lesnar then states that nothing about him is “fake” and he proved that last week when he took Cena down and busted his mouth open. Lesnar then says that Cena is “scared piss-less” and, come Extreme Rules, he has one objective and that is to “bring the pain” to Cena. Lesnar then concludes that, what makes him happy, is “beating people up”! What will happen when Brock Lesnar and John Cena go to war in a match with no disqualifications and no count-outs, an Extreme Rules Match?

In the re-hashing of a destructive rivalry a couple of months ago, Zack Ryder would get his shot at revenge as “The Long Island Iced Z” went one-on-one with “The Big Red Monster” Kane. Before the match can even begin, Kane delivers a big boot to Zack Ryder that sends Ryder off of the ring apron, bouncing off of the announce desk. After pummeling Ryder on the outside of the ring, Kane rolls Ryder back into the ring, planting Ryder with a chokeslam in the middle of the ring. After the attack, Kane says that it was a wonderful “family reunion” last week when he laid both Randy Orton and his father, “Cowboy” Bob Orton, out with a steel pipe. Kane continues that he expected Orton’s father to go down without a fight, but he was surprised by how easily he took care of Randy before saying “like father, like son”. How will Randy Orton respond to the comments made by Kane, not to mention the assault on Randy and his father on last week’s SmackDown?

Backstage, Kofi Kingston is talking with A.J., but Daniel Bryan confronts Kofi, accusing Kofi of hitting on A.J., saying that, just because he broke up with A.J., does not mean that she is “open game”. Bryan then vows to make Kofi tap out to the LeBell Lock, but says that he is no longer going to call it the LeBell Lock, wondering who Gene LeBell ever defeated, before revealing that he will be calling the devastating submission the “Yes Lock”.

After hearing the comments made by Brock Lesnar earlier on, John Cena appeared on RAW to respond to Lesnar’s claims. Cena states that, during his two confrontations with Lesnar last week, he noticed that General Manager John Laurinaitis did nothing to stop it. Cena continues that he does not appreciate Laurinaitis using his power to try and end Cena’s career, saying that Laurinaitis is trying to “legitimize” the WWE, so the GM brings in Brock Lesnar. Cena then says that Lesnar stands for “destruction” and “torture”. Cena continues that, at Extreme Rules, he will face a man whose goal is to defeat and “replace” him. Cena then admits that he is “afraid”, but a “fearless man” is a “liar”, saying that he will “fight” Lesnar and, win or lose, he will fight. Cena is then interrupted by RAW & SmackDown General Manager John Laurinaitis, who says that the fans want to see Cena fight as Cena will compete in an Extreme Rules Match! The GM also announces that, on next week’s three-hour RAW, there will be an official contract signing for Extreme Rules between Brock Lesnar and John Cena! Who will John Cena face in an Extreme Rules Match later on in the night?

RAW brought the funk to London as “The Funkasaurus” Brodus Clay went one-on-one with “The Show-Off” Dolph Ziggler, with Jack Swagger and Vickie Guerrero in his corner. Early on in the match, Jack Swagger tries to rescue Dolph Ziggler from Brodus Clay, but Brodus takes it to both Dolph and Swagger, sending both men out of the ring. Vickie Guerrero then gets on the apron of the ring, but The Funkettes deal with it as, after Vickie knocks Cameron down, Naomi stalks Vickie into the ring, but Vickie is quickly scared out of the ring by the presence of Brodus Clay.

In a team of titanic proportions, Intercontinental Champion Big Show teamed with “The Punjabi Giant” The Great Khali to face the WWE Tag Team Champions, Primo & Epico, with Rosa Mendes in their corner, in a non-title match. Early on in the match, Primo & Epico try to walk away from the match, but Big Show throws both tag champions back into the ring. Moments later, Big Show hits the chokeslam on Epico while The Great Khali hits the Punjabi Plunge on Primo en route to Khali pinning Primo to pick up the win for himself and Big Show.

Then it was time for the main event as, two weeks before facing Brock Lesnar in an Extreme Rules Match at Extreme Rules, John Cena went one-on-one with an unknown opponent in an Extreme Rules Match and General Manager John Laurinaitis revealed Cena’s opponent to be none other than “The Lord of Disaster” Lord Tensai! During the match, Cena uses the steel steps against Lord Tensai, but after Cena rolls Tensai into the ring, Tensai’s handler, Sakamoto, attacks Cena with kicks on the outside of the ring before David Otunga comes around, throwing Cena back into the ring! During the match, Cena locks Lord Tensai in the Crossface, but John Laurinaitis sends David Otunga into the ring again. This time, Cena catches Otunga and hits the Attitude Adjustment on Otunga. However, this allows Lord Tensai to recover as, when Cena turns back to his opponent, Tensai spews green mist into Cena’s eyes, blinding Cena. Tensai then drops Cena with the Disaster Bomb en route to picking up a huge victory, much to the satisfaction of John Laurinaitis! With the official contract signing for his match against Brock Lesnar taking place on next week’s three-hour RAW, what kind of condition will John Cena be in following the recent attacks by Lesnar and the Extreme Rules Match against Lord Tensai?