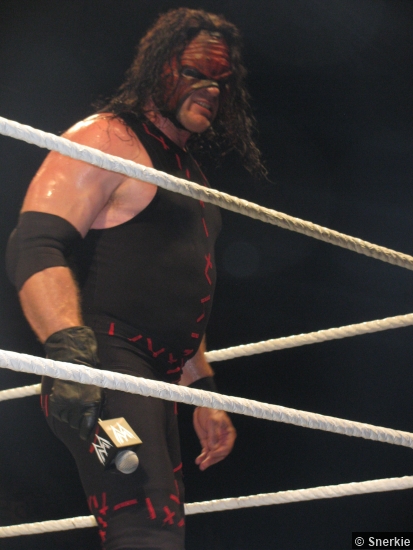 Kane and Orton take it to the people.

The 655th edition of WWE Friday Night SmackDown came to you from the Mohegan Sun Arena in Uncasville, CT. Per the orders of the WWE Board of Directors, the Interim General Manager of RAW, John Laurinaitis, would take the reins for the night on SmackDown. After doing everything in his power to keep the United States Title from Santino Marella on RAW, but ultimately failed as Santino defeated Jack Swagger to become the new champion, John Laurinaitis has teased a Steel Cage rematch between Marella and Swagger for the gold on SmackDown. Not only that, but Laurinaitis actually teased putting Theodore Long’s girlfriend, Aksana, in a match against Kane!

SmackDown kicks off with a steel cage lowering around the ring as David Otunga introduces the Interim General Manager of RAW and the SmackDown General Manager for the night, John Laurinaitis, as Laurinaitis states that Theodore Long never had SmackDown start with a championship Steel Cage Match, but he will be.

Per the orders of the General Manager for the night, John Laurinaitis, the opening match of the night saw the new United States Champion, Santino Marella, defend his newly won title against the man he took the gold from, “The All-American American” Jack Swagger, with Dolph Ziggler and Vickie Guerrero in his corner, in a Steel Cage Match, where the only ways to win are by pinfall, submission, or escaping the cage. During the match, Santino Marella was moments from victory, but Dolph Ziggler climbs onto the side of the cage, only to be knocked off by Santino moments before Dolph is ejected from ringside. Later on in the match, Santino was trying to climb out of the cage through the door, but Swagger manages to lock in the ankle lock on Santino. Vickie Guerrero then fights for control of the door with the referee, but Vickie does not see Santino fighting out of the ankle lock as Santino knocks Swagger into the ropes and Vickie inadvertently slams the cage door on Swagger’s head, allowing Santino to escape and retain the United States Title!

After losing to Justin Gabriel last week moments before being fired by Theodore Long, Drew McIntyre appears on SmackDown. McIntyre reveals that John Laurinaitis had the “wisdom and good business sense” to give him one more chance to keep his job as McIntyre must defeat a mystery opponent to keep his job. However, the mystery opponent is revealed to be “The Punjabi Giant” The Great Khali! Before the match can begin, Laurinatis’ legal counsel, David Otunga, comes out and orders Khali to sit at ringside and not compete in the match before Otunga brings out McIntyre’s real opponent, Hornswoggle! While one slam would have been enough for Drew McIntyre to win the match, McIntyre kept pummeling Hornswoggle to the point of the referee having to stop the match, giving McIntyre the win and, more importantly, his job back! After the match, The Great Khali re-entered the ring, blasting McIntyre with a Khali Chop.

After making the ruling that, if Theodore Long defeats him, then Aksana will be forced to compete against Kane, General Manager for the night, John Laurinaitis, with David Otunga in his corner, would go one-on-one with Theodore Long, with Aksana in his corner. With the safety of Aksana on the line, John Laurinaitis orders Theodore Long to “lay down” and let Laurinaitis defeat him. When Long does not immediately lay down for Laurinaitis, Laurinaitis calls Kane out to the ring. As Kane makes his way to the ring, Aksana retreats into the ring, but when Kane gets on the ring apron, Randy Orton comes out of nowhere, knocking Kane off of the apron before dropping “The Big Red Monster” with the RKO on the arena floor! With Kane out of commission, Theodore Long rolls John Laurinaitis up to pick up the win! Long then quickly leaves the arena with Aksana, ensuring that Aksana is out of harm’s way.

The WWE Tag Team Champions were in action on SmackDown as Primo & Epico, with Rosa Mendes in their corner, faced R-Truth & Kofi Kingston in a non-title match. In the end, it was a distraction gone wrong by Rosa Mendes that allowed R-Truth to hit the Little Jimmy on Primo en route to picking up the win for himself and Kofi Kingston.

Michael Cole then makes an appearance in the ring to conduct an interview between World Heavyweight Champion Daniel Bryan and “The Great White” Sheamus just twenty-three nights before they square off for the World Heavyweight Title at WrestleMania. Cole first asks Daniel Bryan how much “luck” has attributed to his success and Bryan states that he has not been lucky at all, because he is good enough to not need luck. Bryan continues that luck has had nothing to do with his successful title defenses because it has been the “scientific application” of wrestling skill and his “clean” life as a vegan, not to mention his “charisma and undeniable sex appeal”. Sheamus says that he is proud to be a native of Ireland, but he is lucky to be in the United States. Sheamus continues that he makes his own luck because, night after night, he has “fought” his way back to the top. Sheamus then admits that he has had a little luck, but at least he does not “hide” behind a “little girl”. Bryan’s girlfriend, A.J., then tries to speak for herself, but Daniel Bryan takes her microphone away and tells her to “shut up”! The World Heavyweight Champion then says that A.J. has gotten in his way before Sheamus says that Bryan is a “wimp”, vowing to beat Daniel Bryan for the World Heavyweight Championship at WrestleMania.

In a main event full of WrestleMania implications, “The Great White” Sheamus teams with “The Viper” Randy Orton and “The World’s Largest Athlete” Big Show to face World Heavyweight Champion Daniel Bryan, Intercontinental Champion Cody Rhodes, and The Miz in a 6-Man Tag Match. During the match, Big Show would take Cody Rhodes to the outside before Rhodes flees from ringside with Big Show in tow. Shortly after this, Sheamus takes Daniel Bryan out of it on the outside of the ring. This leaves Randy Orton and The Miz alone in the ring as Orton plants Miz with the RKO en route to picking up the win for his team. After the match, Kane would come out and try to attack Randy Orton, but Orton fights back as the two men brawl on the outside of the ring and into the crowd. What will happen next in this budding rivalry between Randy Orton and Kane?