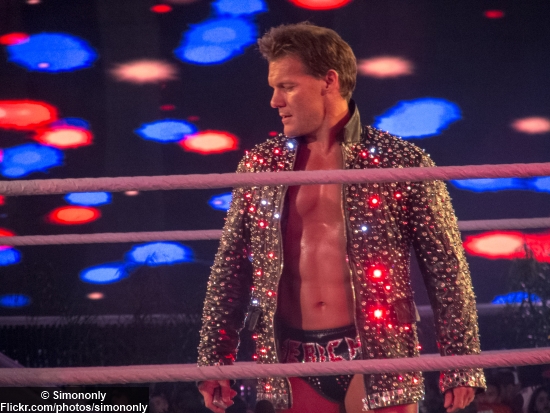 For the first time since November, SmackDown kicks off with the return of “Captain Charisma” as two-time World Heavyweight Champion Christian would host his talk show, The Peep Show, with his special guests, Interim RAW General Manager John Laurinaitis and SmackDown General Manager Theodore Long. Christian first introduces the Interim RAW General Manager, John Laurinaitis, who comes out with the team captain of Team Laurinaitis, David Otunga. Laurinaitis welcomes Christian back to SmackDown before Christian brings out SmackDown General Manager Theodore Long, who comes to the ring with his girlfriend, Aksana. Christian re-iterates that the winner of the 12-Man Tag Match between Team Long and Team Laurinaitis at WrestleMania will earn complete control of both RAW and SmackDown before saying that he is going to give both of them the opportunity to try and convince him why he should be a part of one of their teams! Christian tells Theodore Long that, whichever team he will be on will be the team that wins before Christian tells Long to give him what he “deserves” and that is “one more match” for the World Heavyweight Championship. Long says that Christian has already gotten what he “deserved” before saying that he will not beg Christian, adding that, after his team wins at WrestleMania, he will make the Superstars earn their title shots. John Laurinaitis interrupts, saying that it will be an “honor” to have Christian on his team before giving Christian his “word” that, after his team wins, he will give Christian his title match. Christian then announces that he is officially joining Team Johnny! Theodore Long then interrupts the celebration to announce that Christian will be in action on SmackDown, but John Laurinaitis argues that Christian is not medically cleared, prompting Long to put David Otunga in a match instead as Otunga would go one-on-one with the newest member of Team Long, Kofi Kingston!

Per the orders of SmackDown General Manager Theodore Long, the newest member of Team Long, Kofi Kingston, with United States Champion and Team Long captain Santino Marella in his corner, went one-on-one with Team Laurinaitis captain David Otunga with Theodore Long and John Laurinaitis guests on commentary in the opening match of the night. During the match, Christian gets involved in the match, tripping Kofi Kingston from the outside. Theodore Long responds by informing the referee with the referee ejecting Christian from ringside. This causes another argument between John Laurinaitis and Theodore Long on the outside, which distracts the referee. With the referee’s attention on the GM argument, David Otunga takes off his belt with the intention of using it against Kofi, but Santino Marella takes the belt from Otunga, who knocks Marella off of the apron. However, the distraction allows Kofi Kingston to hit Trouble in Paradise on David Otunga en route to picking up the win.

With World Heavyweight Champion Daniel Bryan in her corner, A.J. would go one-on-one with Nikki Bella, with Brie Bella in her corner. During the match, The Bella Twins tried to pull Twin Magic, but Daniel Bryan called the referee’s attention to it. This would allow A.J. to come out of nowhere with a roll-up on Nikki Bella en route to picking up the win.

Sixteen nights before he defends the Intercontinental Championship against Big Show at WrestleMania, Intercontinental Champion Cody Rhodes would face another giant as Rhodes went one-on-one with “The Punjabi Giant” The Great Khali in a non-title match. In the end, it was Cody Rhodes managing to chop down The Great Khali before Rhodes hits the Beautiful Disaster Kick on Khali en route to picking up a big win. Can Cody Rhodes use the same tactics to defeat Big Show at WrestleMania?

After last week’s show ended with a brawl between himself and Kane, “The Viper” Randy Orton makes an appearance on SmackDown. Orton states that he usually hunts people down that he has a problem with, but lately, he has been the one being hunted. Orton continues that he “embraces hate” and “hate embraces” him before calling Kane out to explain his actions so that, when he puts Kane down, he wants to know why he had to do it. Orton would then get his wish as “The Big Red Monster” Kane emerges as Kane says that he would normally “enjoy” seeing Orton “twist in the wind”, but since Orton asked nicely, he will explain himself. Kane then shows footage from an episode of SmackDown last summer where, after Orton defeated Kane in a Street Fight, Kane shook Orton’s hand. Kane says that the man who was in the footage is “gone” because he is now the “monster” that he always should have been. Kane continues that the WWE is “not big enough” for the both of them and he needs “closure”, adding that he will not be “whole” again until he has completely “decimated” Orton! Orton then says that what Kane said was “enlightening” before telling Kane to come down there and fight him, but Kane opts not to do that as Kane says that, when he destroys Orton, he wants it to happen at WrestleMania! What will happen when Kane and Randy Orton finally go one-on-one at WrestleMania?

After earning his job back, thanks to John Laurinaitis, via a victory over Hornswoggle last week, Drew McIntyre was in action on SmackDown. Before the match begins, Theodore Long states that he is excited to see McIntyre back so that he can put him in a match against “The World’s Largest Athlete” Big Show. In the end, it was Big Show blasting Drew McIntyre with the W.M.D., knocking McIntyre out and rendering McIntyre unable to continue. Will Big Show do the same thing to Cody Rhodes at WrestleMania?

Before facing Sheamus in the main event, Chris Jericho says that he is not going to apologize to CM Punk because you cannot go over the line when you are telling the “truth” and he told the truth about the WWE Champion on RAW. Jericho continues that he knows Punk better than he knows himself as he knows that Punk cried himself to sleep as a child and the he really wishes that the “demons” in his head would just go away. Jericho then says that he is “the best in the world” at everything he does, but Punk only “pretends” to be, calling Punk a “Chris Jericho wannabe”. Jericho says that everything he says is “true” and he is going to prove it at WrestleMania when he walks out as the new WWE Champion. Jericho continues that, after WrestleMania, he is going to fix a cocktail and toast to CM Punk and his “pathetic father”.

Then it was time for the main event as, sixteen nights before they challenge for the WWE and World Heavyweight Titles at WrestleMania, respectively, the #1 Contender for the WWE Title at WrestleMania, Chris Jericho, went one-on-one with the #1 Contender for the World Heavyweight Title at WrestleMania, “The Great White” Sheamus. During the match, World Heavyweight Champion Daniel Bryan and A.J. would make their way to ringside. During the match, with Sheamus prone on the outside, Daniel Bryan delivers a low dropkick to the face of “The Great White”, which would keep Sheamus from making it back into the ring before the ten-count, allowing Jericho to pick up the count-out win. After the match, Sheamus would take his frustrations out on Chris Jericho, blasting Jericho with the Brogue Kick!