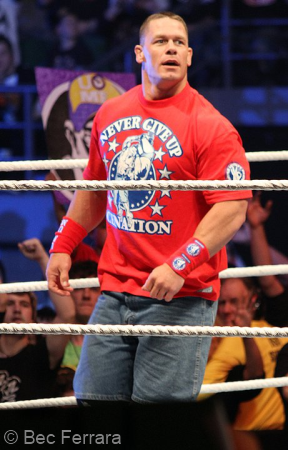 His story in the making.

The 981st edition of WWE Monday Night RAW SuperShow came to you, live, from the TD Garden in Boston, MA. On what promises to be a night to remember, the one and only “Heartbreak Kid” Shawn Michaels returns to RAW to confront Triple H just twenty-seven days before “The Game” steps into Hell in a Cell to go to war against The Undertaker at WrestleMania. RAW will feature not one, but two, icons as The Rock will appear to address his WrestleMania opponent, John Cena, in Cena’s hometown of Boston. Also, per the orders of the WWE Board of Directors, the General Managers will switch roles as, while John Laurinaitis will be in charge of SmackDown this Friday night, Theodore Long would take the reins on RAW!

Twenty-seven nights before his friend, Triple H, steps inside Hell in a Cell to face The Undertaker at WrestleMania, the show kicks off with WWE Hall of Famer “The Heartbreak Kid” Shawn Michaels! Michaels says that, a couple of weeks ago, he came on RAW and things got pretty “heated” between him and Triple H. Michaels continues that it is “water under the bridge” and something made Triple H change his mind about the match and he wants to know what it is. Michaels then calls Triple H to the ring and “The Game” wastes no time in coming out to face the Hall of Famer. Michaels tells Triple H that he “pushed the limits” with Triple H a couple of weeks ago, but Triple H did not budge an inch on his decision, adding that Triple H is a “man of integrity”. Michaels continues that he even called Triple H a “coward” and, unlike other people who have done the same, he got away with it before saying that Triple H is an “oak”. Michaels then says that he could not convince Triple H, but someone must have said something that humiliated “The Game” to the point of accepting the match. Before Triple H can explain why he accepted, Michaels calls up the footage from two weeks ago where The Undertaker tells Triple H that Triple H knows that Michaels is “better” than him, which was the spark that fired Triple H up enough to accept the match and raise the stakes to a Hell in a Cell match.

Shawn Michaels then asks Triple H if the “worst thing” anyone can say to Triple H is that he is better than Triple H. Triple H says that it has “nothing to do” with who is better than who before saying that he is “tired of listening” to people like The Undertaker saying that Michaels is a “failure”. Triple H then says that he could not handle people saying that because he believes Michaels is the greatest performer in history, adding that it “pains” him to look at Michaels as a “loser” and that is why he is going to “end The Undertaker” and “end an era”. Triple H continues that he is going to do it for him and he is going to do it for Michaels. Michaels says that he thought they had a “problem”, but, as usual, Triple H has things “under control”. Michaels continues that he watched Triple H come so close to beating The Undertaker last year, but ultimately failed, just like he knew Triple H would. Michaels then says that he will be right again this year before dropping the bomb shell that he knows he will be right because he will be the Special Referee in the Hell in a Cell match! On April 1 in Miami, Shawn Michaels will be the Special Referee in the Hell in a Cell match between Triple H and the man who forced him into retirement, The Undertaker, at WrestleMania, but after everything the Hall of Famer has been through with both men, is there any way that Michaels can be impartial?

On a night where Theodore Long takes the reins as the General Manager, Long’s assistant, Santino Marella, would challenge Jack Swagger, with Dolph Ziggler, Vickie Guerrero, David Otunga, and John Laurinaitis in his corner. Early on in the match, David Otunga gets on the apron, distracting the referee long enough for Dolph Ziggler to clothesline Santino Marella, which allows Jack Swagger to hit the Swagger Bomb on Santino, but Santino manages to kick out. With the match still in progress, the General Manager for the night, Theodore Long comes out, with girlfriend Aksana and Kofi Kingston in tow. Shortly after this, John Laurinaitis gets on the apron of the ring, but Theodore Long pulls Laurinaitis down. This sparks an argument between Long and Laurinaitis, which draws the attention of the referee, allowing Dolph Ziggler to get another shot in on Santino before fending off an attack by Kofi. Santino then hits the Cobra Strike on Dolph, but Vickie Guerrero gets on the ring apron before Santino scares Vickie off the apron and Aksana shoves Vickie down! Meanwhile, in the ring, Jack Swagger dodges the Cobra and manages to lock Santino in the ankle lock. Then, on the outside of the ring, Long shoves Laurinaitis down while Santino counters the ankle lock in the ring, getting a roll-up on Swagger to pick up the win and become the new United States Champion! John Laurinaits then interrupts the celebration, saying that it is his show, but Theodore Long reminds Laurinaitis that, for the night, it is his show. Long then gives everyone a “present” by having security throw Laurinaitis and David Otunga out of the arena! Long, Kofi, and Aksana then celebrate with the new United States Champion, Santino Marella.

In a pre-taped “history lesson” for John Cena, The Rock appears on the big screen to remind people of the infamous Boston Tea Party before saying that they are going to have a “party” of their own as he is going to throw John Cena merchandise into the Boston Harbor. The Rock starts with a Cena t-shirt before coming to a Cena alarm clock, “midget shorts”, a Cena garden gnome, wristband, and John Cena cologne. Rock says that the cologne smells like “fear, Fruity Pebbles, and possum piss” before throwing it into the Harbor, as well. Rock then tells Cena that he can shine up all his merchandise and shove it up his “candy ass”. Rock then promises a “revolution” of his own and vows to have a “people’s party” on RAW.

With her former friend, Kelly Kelly, a guest on commentary, Eve and her new attitude went one-on-one with Alicia Fox. In the end, it was Eve catching Alicia Fox with a roll-up to pick up the win. For the first time since being shoved off the stage by Kane several weeks ago, Zack Ryder appears on RAW as Ryder tells Eve that it is always “broskis before hoeskis”!

Backstage, Eve catches up with Zack Ryder before she actually kisses Ryder and walks off! After admitting a couple of weeks ago that she “used” Ryder, is Eve trying to use Ryder again?

Twenty-seven nights before they go one-on-one at WrestleMania in their respective championship matches, WWE Champion CM Punk teamed with the #1 Contender for the World Heavyweight Title at WrestleMania, “The Great White” Sheamus, to face World Heavyweight Champion Daniel Bryan, with A.J. in his corner, and the #1 Contender for the WWE Title at WrestleMania, Chris Jericho. At the end of a chaotic match, it was Chris Jericho countering a roll-up by CM Punk into a roll-up his own, managing to pin the WWE Champion to pick up the win for himself and Daniel Bryan.

In his second “history lesson”, The Rock appears and says that, if John Cena was in Paul Revere’s place, they would have shot Cena on sight! The Rock then says that he is “25% black, 25% Samoan, and 50% Clydesdale” and, if he went back in time and whipped Cena’s ass, he would be a hero. The Rock then vows to get in Cena’s face in the ring.

Twenty-seven nights before he challenges Cody Rhodes for the Intercontinental Championship at WrestleMania, “The World’s Largest Athlete” Big Show went one-on-one with The Miz on RAW. Before the match begins, Intercontinental Champion Cody Rhodes comes out to present “Another Embarrassing Big Show WrestleMania Moment” from WrestleMania X-8, where Big Show was not even on the card, but was eating in a restaurant during the event. This would serve to only anger Big Show as Show levels The Miz with the W.M.D. en route to picking up the win.

In his third “history lesson”, The Rock recalls the revolution that took place in front of the Massachusetts State House before saying that he has got the “charisma” of George Washington, the “brilliance” of Benjamin Franklin, and the “you-know-what” of John Hancock. The Rock then vows to make history at WrestleMania by defeating John Cena on April 1 in Miami. The Rock then promises to look into John Cena’s eyes and tell the world exactly what he sees.

After his surprising attack on Randy Orton on SmackDown, costing Orton his match against Daniel Bryan, “The Big Red Monster” Kane went one-on-one with R-Truth on RAW. In the end, it was Kane drilling R-Truth with a chokeslam en route to picking up the win. After the match, Randy Orton makes his way to the ring and, with R-Truth keeping Kane from leaving, Orton hits the ring, dropping Kane with the RKO before telling Kane that it is “good to be back”!

After hearing The Rock’s “history lessons” all night long, John Cena appeared on RAW to address his WrestleMania opponent. Cena says that “finally The Rock is back”, saying that it is “the real Rock”, adding that The Rock’s videos were “electrifying”. Cena then asks what The Rock is saying about him before saying that The Rock is “obsessed with cereal”, asking if he is fighting The Rock or “The Situation” from Jersey Shore. Cena continues that he left The Rock sounding like “Rainman” last week. Cena admits that he looks ridiculous, wearing knee pads just to talk. Cena then questions whether The Rock should come out there live because his best stuff was pre-recorded or via satellite. Cena then says that he has his fingers crossed that they will get the true Rock out there before declaring that they should “bring out The Rock”. The Rock then wastes no time in making his way to the ring to go face-to-face with John Cena. The Rock tells John Cena that he sees “fear” in Cena’s eyes and it is the fear that he is going to take “everything away”. Rock continues that he “sees right through” Cena and that Cena has not shaken his confidence as he has never been more confident about anything in his life. Rock then says that if you “strip it all away”, he is a man who will rip Cena’s throat out and, at Cena’s core, he will always be a “little boy” and he will go down in history as being The Rock’s “bitch”! The Rock then exits the ring before John Cena says that The Rock has options, but he does not. Cena then says that he is not afraid of The Rock, adding that he is going to be the one who makes history at WrestleMania by being “the son of a bitch who will whip The Rock’s ass” before Cena goes and greets the hometown fans and his family. What will happen in the last few weeks leading up to WrestleMania as The Rock and John Cena prepare to go to war?